In 2006 I took part in the 2,996 project. A project to have bloggers remember an individual that died on that horrific day 12 years ago. I was assigned Aram Iskendarian. This is a repost of my tribute:

I am honored to present my memorial to Aram Iskendarian.

As I’ve spent the last few weeks doing research on this man I came to the realization that I wish I would have known him. He was a natural born leader with a calm exterior and a devoted father and husband to his family. A man I would have looked up to.

Aram was 41 the day he died. He was a vice president at Cantor Fitzgerald, where he headed the global risk management group. That day he would have been working on the 101st floor of building 1.

From the little I have been able to glean about his personal life I’ve learned he was a photobug and apparently always had a camera nearby to take pictures of his wife Sheri and their four children, Meryl, Kara, Alex and Jason. 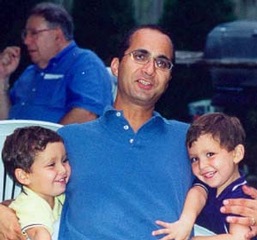 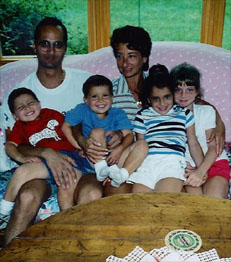 When I first set out to learn about Aram the first webpage that I came across was this one, in which Sheri leaves a note for her husband:

I miss you more than words can I express. You were the love of my life. The children and I hope that you are at peace and did not suffer. Love Sheri

They were high school sweethearts:

The former Sheri Pearlman met her future husband when both were 15 and sophomores at Lynbrook High School. In a tribute delivered at Iskenderian’s funeral, Sheri’s brother, Ted Pearlman of Syosset, recalled his sister complaining about a boy at school who bothered her and pulled her hair.

“Little did we know,” Pearlman wrote, “that this would be the start of a great romance.”

They stayed together through graduation and through college, when he attended the University of Rochester and she was at Tufts in Massachusetts. They were married on Dec. 18, 1983.

Iskenderian was the “epitome of a modern day father” who changed diapers, put his children to bed and taught them about birds, his wife said. The couple has two daughters, Meryl, 11, and Kara, 8.

He gave blood 17 times and was planning to ride in a Sept. 23 bike-a-thon to raise money for a co-worker with multiple sclerosis. Last month, the family’s synagogue, Temple Beth Am in Merrick, held a blood drive in his honor.

This article appeared in the NYT’s about Aram:

“I remember my sister came home from school in 10th grade saying this boy was bothering her, pulling her hair all the time,” Ted Pearlman said. Since then, his sister Sheri and that boy, Aram Iskenderian, had been together, through high school, colleges that were hundreds of miles apart, 18 years of marriage, and times that were sometimes trying. Her family was Jewish, his was not, so there was friction at first. He stood by her through difficult times when she was trying to become a doctor.

“I think that his gentleness and calmness and support when my sister was going through medical school was the turning of the corner,” Mr. Pearlman said. “Through his actions he proved that true inner commitment and loyalty are far more important than anything else. How he stuck by my sister was all-important.”

Mr. Iskenderian, 41, was a vice president in global risk management at Cantor Fitzgerald and was famous for his renovations at home. He and his wife had two daughters and twin sons. “He’d be home every night on that 6 o’clock train,” the latest he would take, said Georgia Stavropoulos, a family friend. “He’d be home with his wife and children, to bathe the kids and put them to bed.”

Wherever he went he seemed to have an impact on people’s lives. Soon after I was given the honor of creating this memorial for Aram I received a few emails from some old college buddies of his such as this one from Saul Pedrera:

I just came across your site and saw your page about Aram Iskendarian. I hadn’t seen him since 1982 when we both graduated from the University of Rochester but always remembered him fondly. He was one of the nicest people I’ve ever met, with a calm and friendly manner that made him likeable and easy to talk to. I know that I speak for all of our classmates when I relay how genuinely nice Aram was.

And another heartfelt one from Kevin Carr:

I was a college buddy of Aram’s at the University of Rochester . We both majored in Optics and were lab partners. Aram asked me to be an usher in his wedding party. To this day, I often use the silver letter opener that I received as a gift from the groom. Aram was always a leader, it was his nature. I am not surprised that his career path led to becoming a Vice President at Cantor Fitzgerald, Unfortunately, this is what placed him in the WTC on 9/11/2001. If Aram survived the initial impact, I am sure that he spent his last moments trying to help others in his office. He could remain calm in the face of a crisis. I will always remember the good times we enjoyed together and the close friendship we shared, although many years ago. 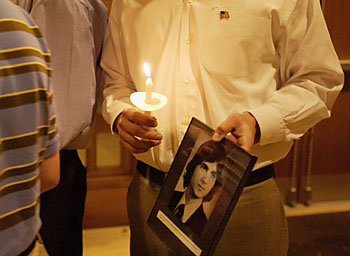 A student carries the image of Aram Iskenderian ’82, one of six University alumni who died September 11.

Much of the memorial messages left at the various websites for Aram all said pretty much the same thing. Very friendly and calm. He could stay calm through the toughest times. If he did indeed survive the initial impact of the planes then this is more then likely how he died. He would have been trying to keep everyone calm and to get everyone out of the building I imagine.

No blog post could do justice in remembering anyones life, and mine is no different. But I hope this page will serve as a memorial for Aram’s family and friends to remember the life of a man who should not have died so young, but died a hero.

I was friendly with Aram and Sheri in high school. Thank you for keeping his memory alive. Your memorial touched me very much on this 13th anniversary of that horrible day,

Aram was my first cousin. Thanks to my precious grandmother (who was the only driver in our family) we were constantly together in their Lynbrook, Long Island home. I was at Aram’s wedding and he was at mine. Our last moments together were spent buying Christmas lights. I miss him very much and hurt deeply over his tragic death. May God bless and watch over his family. His cousin, Greg Mergian