Charlottesville: The “counter protesters” started the fight. The media is burying that fact to get Trump. 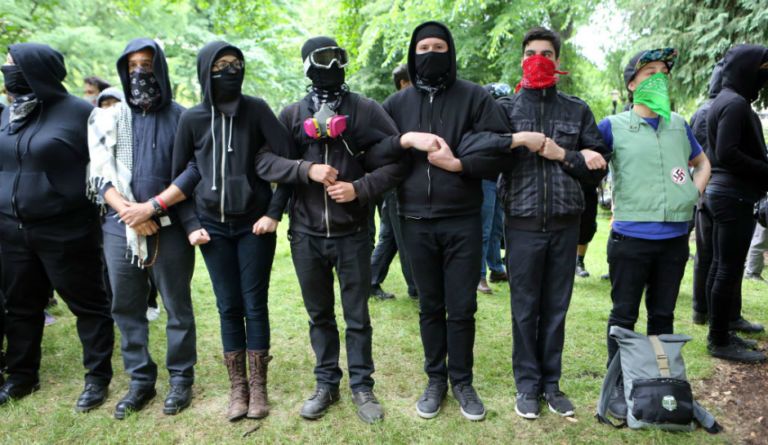 First, a thought experiment. What if some anti-abortion activists “peacefully” got together and locked arms to prevent anyone from entering an abortion clinic?

Would it matter who was trying to enter?

Would it be racist?

Would it be the fault of the person trying to enter?

Keep it in mind. Donald Trump made several statements the other day that made the left wing media apoplectic. One of the most media-controverted statements was Trump doubling down on blaming both sides for the violence.

“I think there is blame on both sides,” Trump said during a contentious back-and-forth with reporters in the lobby of his Midtown Manhattan building.

And there absolutely is blame on both sides. This is from USA today, describing the experience of a white nationalist as he tried to enter Emancipation Park for the lawful assembly:

But as he entered the intersection just outside Emancipation Park, Heimbach and members of his Traditionalist Workers Party were met by counter protesters who had formed a blockade. A melee ensued, with people being flung to the ground in what was the first in a series of violent episodes that turned a graceful college town into a battleground. Later, when a car plowed into a crowd of people, at least killing one person and injuring 19 others, the casualties were all too real. (emphasis mine)

And then there is this from Slate:

It was basically impossible to miss the antifa for the group of us who were on the steps of Emancipation Park in an effort to block the Nazis and alt-righters from entering. Soon after we got to the steps and linked arms, a group of white supremacists—I’m guessing somewhere between 20-45 of them—came up with their shields and batons and bats and shoved through us. We tried not to break the line, but they got through some of us—it was terrifying, to say the least—shoving forcefully with their shields and knocking a few folks over.

The “counter protesters” were the antagonists in this clash. They attempted to block the lawful entry of the supremacists into the park. They disrupted the alt-right protest. As I suggested above, was an anti-abortion group to block women from entering an abortion clinic, there would be a rapid police response. In this case, because the group with the law on its side is so hated, none was coming.

Did they know what they were provoking? Yes. From the NY Times:

Did they expect violence?

Were all of the counterprotesters nonviolent?

No indeed. They were frequently violent:

“Since the weekend, witnesses have told us that in fact, both sides were antagonizing for a fight,” NBC’s Tom Costello says. Later, the report shows a clip of Trump’s Tuesday press conference in which he said, “What about the alt-left? What about the fact that they came charging…with clubs in their hands, swinging clubs?” Costello’s narration continues, “In fact, that’s true. Witnesses tell NBC News there were people on both sides who seemed ready for a fight and some counter-protesters were armed with clubs, some with pepper spray.”

The BBC published a similar look at the violence in Charlottesville and what Trump said about it. BBC reporter Joel Gunter, who was there Saturday, said, “The President said that the violence on Saturday was perpetrated by both sides.” After playing a clip of Trump’s press conference, Gunter continued, “Trump is right. There was violence on both sides. I saw counter-protesters throw bottles, rocks and paint and clash with the white supremacists. Both sides sprayed pepper spray.”

Both sides employed violence. Both sides.

Something else Trump said made them nuts:

CBNC called it “jaw dropping.” Problem is, that was also true. Again, the NY Times:

”Good people can go to Charlottesville,” said Michelle Piercy, a night shift worker at a Wichita, Kan., retirement home, who drove all night with a conservative group that opposed the planned removal of a statue of the Confederate general Robert E. Lee.

After listening to Mr. Trump on Tuesday, she said it was as if he had channeled her and her friends — all gun-loving defenders of free speech, she said, who had no interest in standing with Nazis or white supremacists: ”It’s almost like he talked to one of our people.”

Conservatives like Ms. Piercy, who have grown only more emboldened after Charlottesville, believe that the political and media elite hold them and Mr. Trump to a harsh double standard that demands they answer for the sins of a radical, racist fringe. They largely accept Mr. Trump’s contention that these same forces are using Charlottesville as an excuse to undermine his presidency, and by extension, their vote.

Night shift worker at a retirement home. No interest in the Nazis or the white supremacists. Sounds like, to coin a phrase, fine people. Trump was right on both counts.

What is happening right now is abominable. The media has no interest in the truth and they are abusing their perches to shame anyone who dares scrutinize at the counter protesters and tar them as a Nazi sympathizer or a racist. It is the new McCarthy era.

Unite the Right, the white supremacists and the Neo-Nazis are wretched, loathsome evil people but they do have rights and they did have the right to enter the park.The media has portrayed the counter protesters as saints with impeccable behavior. It is a false narrative. It is a lie. The antifa gang unlawfully blocked the alt-right group from exercising their right to freedom of assembly. They were the provocateurs. If you don’t care about their rights, your rights are also in jeopardy. If you don’t care that the media is lying because it suits your narrative, you lack ethics. Right now, the media is no better than Unite the Right. They have become Pravda. The alt-right is awful, but that does not justify deceit and mandacity. Michelle Piercy is right. Trump is right but the media is derelict in avoiding the truth and is using Charlottesville as a means of undermining his Presidency.

The hatred of the alt-right and the hatred of Donald Trump is not a justification to trample the Constitution and lie to America. It makes us Russia. It’s like planting evidence to create guilt.

A candlelight vigil was held in Charlottesville last night for the victims of the violence. It was not publicized:

The vigil was not publicized in advance, but spread through a stealth campaign to thwart any hate groups that might seek to disrupt it.

But it was fine to disrupt someone else’s right to assembly- which led to the violence and the deaths. How’s that for irony?