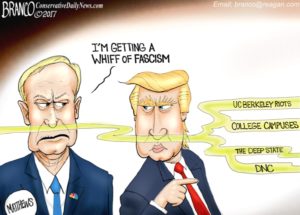 Welcome back everybody – busy week so let’s get straight to the crazy!

The Party of the Racial Victimhood Industry – Part I

I am absolutely shocked and surprised by this. Not that it happened, but that it wasn’t passed down as a mandate during the Obama administration

Translate: “Don’t vote for those Democrats who want to force single payer on us! Vote for the party who will slowly shepherd our health care system to single payer instead!”

Radical Leftists continue to fantasize that everyone is on board with their Coup D’ Etat fantasies. Yes, America is just waiting for President Trump to be primaried by the great… John Kasich!

Sadly, the late, great Lemmy from Motorhead was unavailable for comment

8/6 – Healthy Feminism Still Exists. I Found It In An Auditorium In New York City.

Yes, seriously. Waiting for condemnation from the Radical Left in 3,2,1…

8/7 – THE RAPE AND MURDER OF KARINA VETRANOAnd the predictable response of the Racism-Industrial-Complex.

The Party of the Racial Victimhood Industry – Part II

This is a a story about Venezuela. For commentary I’ll turn to William Teach of The Pirate’s Cove:

“It’s been a long time since Venezuela actually was a democracy, but, this is meant to be against Trump”

The party of Segregation strikes again!

I don’t buy too much into these political speculation articles from either direction, but this one raised one interesting point that I’m surprised that nobody (myself included) has mentioned yet:

Typically, when a party is in power, its voters become complacent therefore less enthusiastic, and therefore less likely to vote in midterm elections. However, that isn’t happening this time. The special elections show that complacency isn’t setting in. Why not? Because of the media and the Democrats’ insane overreach.

There was no January honeymoon period where Trump’s approval was in the sixties and everyone gave him a chance. There was no top-down feeling from Democratic leaders that elections have consequences. There was no momentary spirit of this-is-what-the-people-want bipartisanship. Instead, there were apocalyptic, Democracy-is-over attacks. Mainstream media smearing. One obsolete Russia narrative after another. Bureaucrats leaking any scrap of classified information that might be damaging to Trump. Outrageous accusations on a daily basis.

Ironically (and unwisely), Democrats and the mainstream media are standing in the way of Republican complacency. Their anti-Trump overreach is counterproductive to their electoral goals. And, right now, it’s the glue holding together a Republican party that might have imploded without the unifying cause of defeating leftist nonsense.

8/8 – Do Democrats Resent Having to Make an Argument?

Great read, but it stops just short of the obvious root cause: Democrats resent the fact that opposing views are still allowed to exist

I don’t understand why anyone on the right would complain. This is a perfect representation of today’s Democrats and should be publicized!

8/9 – The endless, impossible search for just one conversation that doesn’t mention Trump

We talk about him on dates, in bars, at the therapist’s. When did we become so boring?

Become? And what do you mean “we”, Kemosabe? #NoDCIsn’tABubble  Best line in the article:

But now: “My therapy sessions have become an MSNBC panel,” one Washington-based journalist tells us.

Not the entire ACLU mind you, just the nimrod who had no problem defending Bradley Manning

8/11 – Even lefty Seymour Hersh agrees that the Russian fable begin in the mind of Obama’s CIA director.

I know, I’m preaching  to the choir. This is just another arrow for your quiver to use when you want to anger Leftists with facts

One last story – a bit long, but incredibly timely and worth your read. You get bonus points if you can scroll down quickly enough to not read when it was published until after you’re done reading.

Weekend Must-Read: Ten Reasons Why I Am No Longer a Leftist

As usual, we close out with a series of tweets. Thanks to Nanny G. for mentioning the Lena Dunham story in last week’s comments – instead of citing her story I give you Iowahawk’s take on it. And the last tweet today is from the previous week but it won the Internet for that day..

RT if you think Lena Dunham should only travel by trebuchet https://t.co/t78vjh7IDF

Well to be fair a lot of people were thrown into mass graves in nature https://t.co/5IQMvCgwl2

That's just a little bit more than the law will allow. https://t.co/vbdYEl8zSr