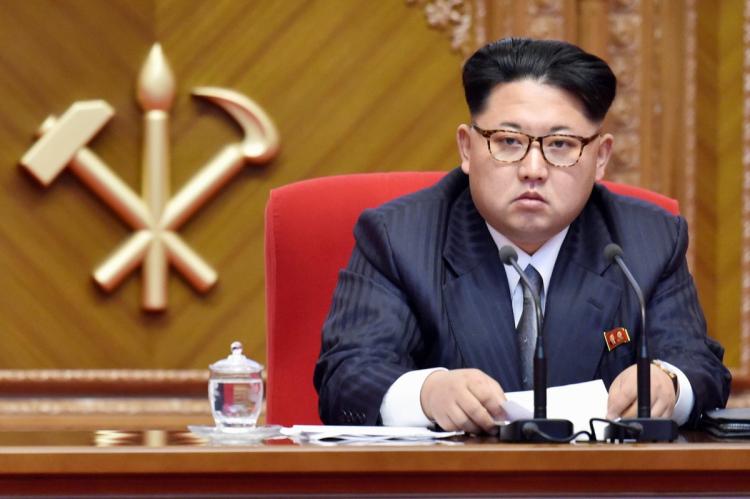 Kim Jung Un is said to have crossed the line into becoming a full nuclear power and there is concern about his being to strike America:

North Korea has successfully produced a miniaturized nuclear warhead that can fit inside its missiles, crossing a key threshold on the path to becoming a full-fledged nuclear power, U.S. intelligence officials have concluded in a confidential assessment.

The new analysis completed last month by the Defense Intelligence Agency comes on the heels of another intelligence assessment that sharply raises the official estimate for the total number of bombs in the communist country’s atomic arsenal. The U.S. calculated last month that up to 60 nuclear weapons are now controlled by North Korean leader Kim Jong Un. Some independent experts believe the number of bombs is much smaller.

The findings are likely to deepen concerns about an evolving North Korean military threat that appears to be advancing far more rapidly than many experts had predicted. U.S. officials last month concluded that Pyongyang is also outpacing expectations in its effort to build an intercontinental ballistic missile capable of striking cities on the American mainland.

Kim has been making repeated threats to destroy the US.

KCNA reported that a spokesman from the North Korean Foreign Ministry said, “The DPRK legally stipulates that if the supreme dignity of the DPRK is threatened, it must preemptively annihilate those countries and entities that are directly or indirectly involved in it, by mobilizing all kinds of strike means including the nuclear ones.”

Donald Trump has responded, saying the US would bring  “fire and fury” down upon North Korea:

After having grown accustomed to a weakling in the White House, the left has soiled its collective pants over Trump’s statements.

But Democrats slammed Trump for a reaction they charged was “bombastic” and “unhinged.”
“President Trump is not helping the situation with his bombastic comments,” California Sen. Dianne Feinstein said in a statement.
New York Rep. Eliot Engel, the top Democrat on the House Foreign Affairs Committee, said Trump had undermined US credibility “by drawing an absurd red line.”
“Make no mistake: North Korea is a real threat, but the President’s unhinged reaction suggests he might consider using American nuclear weapons in response to a nasty comment from a North Korean despot,” Engel said.

No, not unhinged. These people do not respect weakness.

Secretary of State Rex Tillerson urged calm and said Americans should have “no concerns” after North Korea and President Donald Trump traded fiery threats, insisting Wednesday he doesn’t believe there is “any imminent threat.”

In more tranquil terms, Tillerson sought to explain the thinking behind Trump’s warning to Pyongyang that it would be “met with fire and fury like the world has never seen” if it made more threats to the United States. Tillerson said Trump was trying to send a strong and clear message to North Korea’s leader so that there wouldn’t be “any miscalculation.”

What the AP failed totally to report was this:

“What the president is doing is sending a strong message to North Korea in language that Kim Jong Un can understand, because he doesn’t seem to understand diplomatic language.”

Exactly. Trump is giving them what they’re spitting at us.

Kim is not likely to hurl a nuke at the US territory. That would mean the demise of countless numbers of people, but more importantly to Kim, his own demise. Kim wants something. He wants a deal.

Kim wants the kind of deal obama gave to Iran- all carrots and no stick; billions in cash delivered in the middle of the night, with front-loaded bargains and lifting of sanctions. And that deal sucked:

Coming just days after President Trump reluctantly recertified that Iran was mostly in compliance with the letter of the 2015 nuclear deal, the sanctions signal Trump’s growing dissatisfaction with both Iran’s behavior and the nuclear agreement, which he promised to withdraw from during last year’s campaign.

And he’d be right to do so. Barring a dramatic change in Iran’s behavior, Trump should pull out of the six-powers nuclear agreement with Iran, a bad deal that will soon result in a workable nuclear weapon in the hands of Iran’s murderous mullahs.

Iran is already testing launched-delivery missiles for a nuclear weapon, contrary to the 2015 agreement, in part financing it with money freed up by President Obama’s removal of financial sanctions.

“Since the nuclear agreement was adopted last year the latest rocket launch by Iran was the fourth of its kind, in defiance of the United Nations resolution,” wrote Hassan Mahmoudi, a human rights activist focusing on Iran and the Middle East, in the American Thinker. “Iran is using the cash it has received from the Obama administration’s ransom payment for just such military expansion, as well as its terrorist activities.”

The truth is, Iran is the world’s No. 1 state sponsor of terrorism. But it’s now looking to take its core competency, conventional terrorism, to another level: nuclear terrorism. The U.S. should oppose it resolutely, just as it’s opposing North Korea’s growing nuclear threat, which now threatens parts of the U.S. Giving nuclear weapons to terrorists and madmen is like giving matches to arsonists. Sooner or later you’ll get burnt.

And make no mistake. The mullahs aren’t suicidal, but once they get a real nuclear weapon they won’t hesitate to blackmail us — or, more likely, Europe. Even worse, they may be tempted to deliver a nuke to an Islamist terrorist group that will use it.

It was portrayed as a means of stopping a nuclear arms race. Instead, because obama gave in to terrorists, it begat one:

Reagan’s arms negotiations with Moscow were never totally detached from Russia’s behavior in other areas. Deeds mattered. The JCPOA’s biggest fundamental flaw is that it ignores the big picture. It tries to separate Iran’s violent policies and behavior from its nuclear weapons program, even though that program is central to the Iran’s revolutionary goals.

If Tehran’s ayatollah dictators want the JCPOA to continue, then their regime must demonstrably change its behavior. Here are four demands the Trump Administration should make in exchange for continuing the JCPOA and improving its verifiability. Tehran must immediately end its proxy war in Yemen. In a New York minute it must stop destabilizing Bahrain. It must terminate its program to develop intermediate and intercontinental ballistic missiles—and we get to inspect to missile development facilities. Finally, Iranian forces must stop interfering with U.S. Navy operations. Yes, ayatollahs, no more speedboat bluff. Halt your unsafe approach.

Will the robes and Revolutionary Guards agree to this new deal? I’ll respond with another rhetorical question: Would a competent American negotiator genuinely concerned with obtaining peace and improving security have agreed to Obama’s JCPOA?

The answer to both questions is “No.”

America, however, will once again be on record opposing the ayatollahs’ quest for nuclear weapons, and for Revolutionary Guards, speedboat bluff would become a riskier endeavor.

That is obama’s true legacy-another arms race. And all these tinpot dictators want a piece of the action.

Golly, we just learned that obama knew about these mini-nukes in 2013 and did what obama does best- NOTHING.