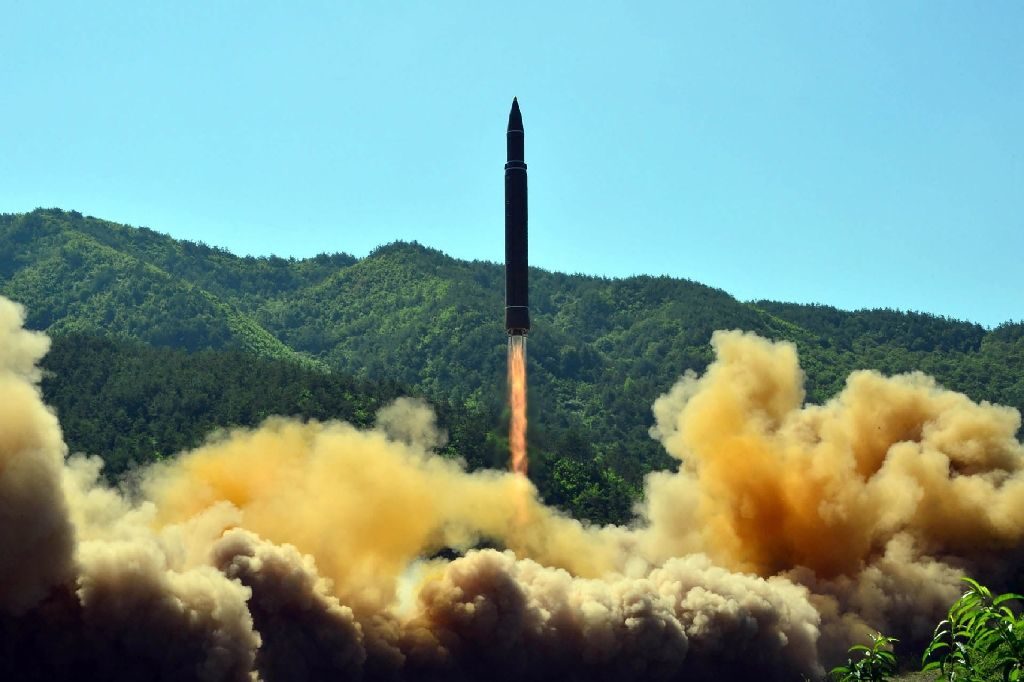 North Korea is run by a madman. That is not in question. He’s not stupid, he’s insane. Kim Jong Un’s brother was murdered, allegedly on Kim’s orders.  North Korea has been developing long range missiles at a breakneck speed. They likely got the guidance technology from China, who got it from Clinton donor Loral/Hughes who apparently got the nod to sell the technology to China from Clinton in return for campaign cash. Now, thanks to democrats, North Korea has a missile that is said to be able to reach not just Hawaii, but mainland USA:

Kim Jong-Un boasted of North Korea’s ability to strike any target in the US after a second ICBM test that weapons experts said Saturday could even bring New York into range -– in a potent challenge to President Donald Trump.

China condemned the test but US Secretary of State Rex Tillerson said Beijing and Moscow bore “unique responsibility” for the growing threat posed by the reclusive North.

Under Kim’s leadership North Korea has accelerated its drive towards a credible nuclear strike capability, in defiance of international condemnation and multiple sets of UN sanctions.

Kim said the test “is meant to send a grave warning to the US” and demonstrated the North’s ability to launch “at any place and time,” the official Korean Central News Agency (KCNA) said.

The “leader said proudly the test also confirmed all the US mainland is within our striking range,” it said.

North Korea has nuclear capability also thanks to Bill Clinton.

Iran, used to kicking Barack Obama’s ass around, continues to stick a thumb in the eye of Uncle Sam with it’s missile program:

Iran has vowed to press ahead with its missile programme, denouncing new US sanctions as “an effort to weaken the nuclear deal”.

“It’s ultimately an effort to weaken the nuclear deal,” he said, referring to the 2015 agreement between Iran and US-led world powers that lifted some sanctions on Tehran in return for curbs on its nuclear programme.

“We will continue with full power our missile programme,” he said. “The military and missile fields […] are our domestic policies and others have no right to intervene or comment on them.”

Iranian state TV reported on Saturday that the country’s parliamentary committee on national security and foreign policy held an urgent meeting to review its response to a package of sanctions approved by the US Senate.

“It is imperative that we show an appropriate reaction in light of such hostile and vicious actions taken by the United States,” Abbas Araghchi, Iran’s deputy minister and senior Iranian negotiator, told reporters.

Iran’s missile tests are in violation of United Nation dictates:

“We call on Iran not to conduct any further ballistic missile launches and related activities,” they said.

Resolution 2231 called on Iran not to test ballistic missiles capable of carrying a nuclear warhead, and an arms embargo has remained in place.

That cagey Obama did not link his deal with Iran to any UN Resolutions, so Iran’s nuclear-delivery system program does not violate the Obama agreement. The Obama-Iran deal always stunk, and it’s failing now.

These two boats are sailing into dangerous waters- seriously dangerous. So now is the time to ask Schumer and Pelosi-

“What would you do with North Korea and Iran?”

Russian collusion? There are so many Clinton scandals to throw in the faces of ignorant liberals whining about someone’s potty mouth or the imaginary collusion that Bill Clinton sharing missile and satellite technology with the Chinese (in exchange for the requisite cash payments) gets swept away. But, particularly in light of the N. Korean and Iranian threats we now face (and which liberals have long coddled), the Clinton Chinese Collusion is far more treacherous and dangerous than any of the alleged Russian collusion (by Republicans, anyway) has even been imagined.

Clinton greed and liberal incompetence puts the entire world at risk and all Democrats can do is imagine Russian collusion and try and disrupt the entire government… out of spite. Infantile spite.

@Bill… Deplorable Me: The Dumbocraps do not understand that the policy they are promoting will make most, or all of Europe Muslim within 10 years. They are on the verge of taking over completely in Sweden, France, Germany and likely the UK within that time.. I predict Sweden will be lost within 5 years. The Europeans don’t seem to care. The Dumbocraps don’t seem to care. Trump has seen the handwriting on the walls. Somebody better start listening.

Nasty Nancy and Chukie Sleeze they certianly would make a perfect pair of disney type villians dont you think?

Watching her on tv this morning. I think she’s had springs installed in her eye lids. Bet she has to sleep with eye patches to shut out the light. That might also be true with her upper and lower lips, they don’t seem to close together either. She’s sure keeping some plastic surgery guy busy.

Smear and Piglosi like all demoncraps in congress have NO answers or message other than hate!! Time for the Senate to destroy the fillibuster rule and move America forward!!

Hey little fat shit, I dare you to send a rocket to san fransisco.

Iran, used to kicking Barack Obama’s ass around, continues to stick a thumb in the eye of Uncle Sam with it’s missile program:

The deal Obama struck with Iran was chiefly concerned with Iran’s nuclear weapon program. When the deal was made, Iran was getting very close to the point where they could have assembled a nuclear weapon. It was estimated that this was less than a year away. That didn’t happen. Last year, in compliance with one of the provisions of the deal, Iran destroyed the core of the only nuclear reactor they had capable of producing weapons-grade plutonium. They also exported much of their stockpile of low-enriched uranium and decreased their production of heavy water. As a result, their nuclear weapon program has been effectively set back by years.

Would you prefer to have had a nuclear-armed Iran at this point? Obama’s nuclear deal has put that off at least 15 years into the future.

As Obama warned the incoming president, North Korea will be his single greatest problem.

@Greg: Using the same incorrect rhetoric that Clinton used when Korea first went nuclear. Would you prefer to have had a nuclear-armed Iran at this point? Obama’s nuclear deal has put that off at least 15 years into the future. Why do Democrats hate children little 3 year olds just old enough to serve in 15 years, if they aren’t nuked by a Clinton mistake first.

Regarding the past, it seems to be a standard belief among republicans that they always could have done better. Since they’re presently in power, maybe they should focus their attention on what can be accomplished in the present.

@Greg: Is that drool on your keyboard??? http://fortune.com/2016/09/07/us-iran-billion-hostages-arms-deal/ the state dept declared them the biggest sponsor of terrorism, how is bankrolling them making the world safe?

Regarding the past, it seems to be a standard belief among republicans that they always could have done better. Since they’re presently in power, maybe they should focus their attention on what can be accomplished in the present.

ANYONE could have done a better job, allowing the economy to comer roaring back from a deep recession, not ruin 1/6 of the economy, NOT destabilize the entire Middle East and certainly not feed money to a radical Islamic terrorist state. However, currently, many messes and disasters have to be cleaned all while trying to move the nation forward.

Here’s a new two-question pop quiz: What country is the source of and main financial sponsor of Wahhabism? How does Wahhabism relate to Islamic extremism?

You already failed an earlier test, when you backed the nomination and election of Donald Trump.

@Greg: Obama’s Iran deal was a VERY BAD DEAL. None of your other tangential diversions matter. Obama, inexplicably, made a very bad deal which favored ONLY the largest supporter of terror in the world. Not only did he give them billions of dollars, but he enabled their nuclear program, which they have VOWED to use to destroy Israel.

Maybe you should think about some alternate outcome scenarios in which Obama’s nuclear deal with Iran never happened, giving them a current stockpile of half-a-dozen or so nuclear warheads. Would you have liked that outcome better? Would it have been better for Israel? It would have been an entirely probable result.

Some people imagine a perfect military solution was possible. They imagine the same thing is possible in the case of North Korea. They always tend to be a short on specifics, however, and seldom give much thought to the most likely real-world consequences. As with their assertion that they had an alternative healthcare plan all worked out, and an secret alternative plan to quickly defeat ISIS, which could not be talked about without telegraphing their punches. It all sounds great to the rubes—so long as it remains in the imagination.

@Greg: Without the Obama Bend-Over, worst case is they would proceed, just as they are now, but still suffering under sanctions and WITHOUT the billions of dollars Obama gave them. What SHOULD have happened is that Israel should have been green-lighted to hit Iranian facilities before they were hardened and before Russia was allowed (due to more Obama incompetence) to become the leader in the region.

[…] Flopping Aces has the disturbing story of how Bill and his handler wife are directly responsible for the rapid pace of nuclear development the Norks are displaying. […]

We gave them back their own money—billions of dollars in Iranian assets held in U.S. banks that we locked when we severed diplomatic relations back in 1979. We also owed them $400 million Iran paid for military equipment which we never delivered.

In return for giving them back what was already legally theirs, we got a 15-year hold on their nuclear weapon program with international oversight. They exported the bulk of their stocks of low enriched uranium and permanently disabled the core of their single plutonium-producing reactor—both of which have been verified.

That seems like a reasonable deal to me. Let me know when Donald Trump accomplishes anything even remotely as useful.

we got a 15-year hold on their nuclear weapon program with international oversight.

You think that hold will work as well as Clinton’s deal with N. Korea back in 94 when NK ended up with a nuke before Slick even left office?

Donald Trump recently recertified Obama’s Iran nuclear deal. Maybe you should put the question to him.

Hopefully someone will also talk him out of sabotaging the Affordable Care Act, as he has threatened to do. With his campaign rhetoric, he has painted himself into more than one corner. He probably doesn’t want to stay in them until the paint dries.

@Greg: I haven’t made a study of whether he can or can not cut off the funds with an executive order. I do know that Obozo used executive orders for many things that appeared illegal but his admirer’s loved it, so I guess as a tool, executive orders can be effective.

@Greg: And how much did Iran pay in penalties for holding American hostages for 444 days? We didn’t owe them a damn nickel and damn sure should not have paid any MORE ransom.