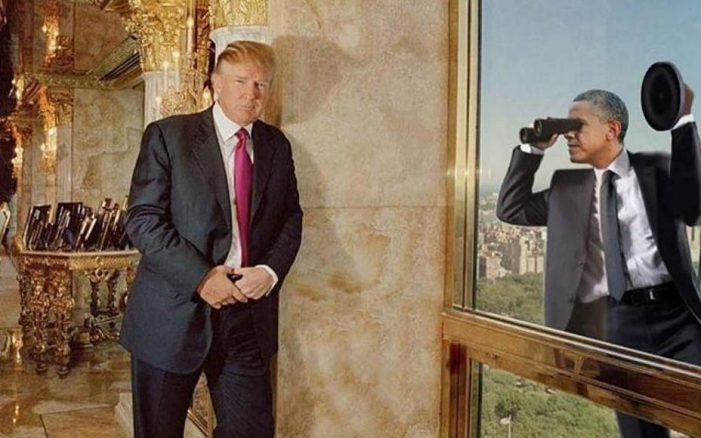 It would explain everything.

Despite all the left wing blather, not a shred of evidence has ever been produced to give credence to the accusation that Trump colluded with the Russians to defeat Hillary Clinton. (Clinton has written a new book- “I lost because of….” and you can fill in the blank) It was conceived to distract the country and the mentally vacant press from the real scandal.

I have long said that had there been anything to the Trump-Russia accusation it would have leaked by now, as the White House is a sieve. It’s so bad that the number of times Donald Trump has taken a leak in a day is leaked within an hour. But if there was something, obama would have dropped the hammer before the election. He knew there wasn’t.

He knew there wasn’t anything because he was spying on Trump, his staff and a whole lot of Americans, and probably Mitt Romney and his staff as well. It is well known by now that Susan Rice routinely unmasked Americans caught up in NSA intercepts. She denies abuse but given her proclivity for mendacity it is a virtual certainty she did it for political reasons.

And for her boss.

The extent of this abuse is only now becoming known:

The National Security Agency and FBI violated specific civil liberty protections during the Obama administration by improperly searching and disseminating raw intelligence on Americans or failing to promptly delete unauthorized intercepts, according to newly declassified memos that provide some of the richest detail to date on the spy agencies’ ability to obey their own rules.

There also were several instances in which Americans’ unmasked names were improperly shared inside the intelligence community without being redacted, a violation of the so-called minimization procedures that Obama loosened in 2011 that are supposed to protect Americans’ identity from disclosure when they are intercepted without a warrant. Numerous times improperly unmasked information about Americans had to be recalled and purged after the fact, the memos stated.

The newly declassified memos describe a number of obama-era violations:

-“Isolated instances in which NSA may not have complied with the documentation requests” justifying intercepts or searches of intercepted data.

– The misuse of “overly broad” queries or specific U.S. person terms to search through NSA data.

– Failures to timely purge NSA databases of improperly collected intelligence, such as a 2014 incident in which “NSA reported a gap in its purge discovery processes.”

Devin Nunes, chairman of the House Intelligence Committee, weighed in on this yesterday. In a letter to DNI Dan Coats, Nunes wrote:

“We have found evidence that current and former government officials had easy access to U.S. person information and that it is possible that they used this information to achieve partisan political purposes, including the selective, anonymous leaking of such information,” Nunes wrote in the letter to Coats. The letter was provided to The Hill from a source in the intelligence community.

Someone wanted it to be very easy for digging up information on opponents:

But beginning in 2011, Obama loosened the rules to make it easier for intelligence officials and his own political aides to request that the names be unmasked so they could better understand raw intelligence being gathered overseas.

And to better spy on the opposition. “Hundreds” of Americans were unmasked, often by those with absolutely no need to know:

“The committee has learned that one official, whose position had no apparent intelligence related function, made hundreds of unmasking requests during the final year of the Obama administration,” Nunes wrote. “Of those requests, only one offered a justification that was not boilerplate.”
Sources familiar with the Nunes letter identified the official as then-U.N. Ambassador Samantha Power.

The best reason to believe obama spied on everyone? This:

That means they are off-limits from the public for the next five years under the Presidential Records Act.

In April, reports emerged that Rice had requested to “unmask” — or unveil the hidden names of — Trump transition officials who were caught up in surveillance of foreign targets.

Judicial Watch President Tom Fitton explained on “Fox & Friends” that they received a letter informing them that their request for materials related to Rice’s unmasking of U.S. citizens, the hacking of DNC computers and suspected Russian communications with the Trump team will not be fulfilled.

These are devious actions and gross violations of the law. The Russia collusion story is a smokescreen to obscure the real crimes.

So, most likely all this collected data could prove, once and for all, the collusion with Russia by the Trump team. I wonder why Obama would just seal all that up and hide it away? Sounds like obstruction of justice.

Unless, of course, there is NOTHING whatsoever to the Russian collusion tale and they all know it. Naaaaahhhh……

Many of us see all the clear indications. Much of the evidence has been clearly revealed. We will find that the Obama administration was the most corrupt administration in history.

@Bill… Deplorable Me: Probably, but the MSM will never report it.

Obama isn’t the problem. He hasn’t been president for 6 months now. Nor are democrats the problem. They don’t control the House, or the Senate, nor do they control most state governorships or state legislatures.

Perhaps the problem could be discovered by way of a process of elimination. We could eliminate what logically can’t be the problem, and see what we have left.

@Greg: Obama left behind a corrupt system that uses the federal government to protect and promote the Democrat’s march towards socialism. Obama IS the problem. Obama and the rest of the leftists who don’t believe laws apply to anyone supporting liberalism.

If Hillary hadn’t been defeated, SHE would also be the problem, only she would be lining her pockets in the process.

Abusing the intelligence gathering community has nothing to do with the House or Senate. It has to do with your leftists trying to circumvent the Constitution and I hope and pray Trump drives people to root out every one of these criminal conspirators and prosecute them to the fullest extent of the law.

The truth is that just as the Ship of State was sailing into increasingly stormy seas, a minority of clueless voters decided it was a good idea to put a loose cannon in the White House. By some electoral fluke, they actually managed to do so. The guy they elected can’t even organize his own administration. He throws loyal people under the wheels whenever he’s taken with a notion to do so, choosing the moment like it’s a reality TV show, and replaces them with sycophants who will sooner or later get the same treatment. He has incapacitated the State Department, ridding himself of experienced people who know things, and put a total amateur in charge. Everyone with a brain is dreading the moment we’re confronted with a really dangerous international crisis, because the first tool he’ll reach for is a hammer.

Obama understood restraint, careful and thoughtful calculation, and the small moves that are required to successfully play the long game. He liked orderly progress, with thoughtful course corrections. Trump creates chaos. He maximizes uncertainty and confusion. He figures that gives him an advantage, since he’s at the controls of his own bumper car and is the only one who knows what he might do next. His nature is to gamble, and leave the scene of any accident that results as quickly as possible. Someone else can deal with things that don’t work out. He’s already on to the next project.

Obama abused organizations and processes put in place to protect the American people. He used it as his own little political weapon; just as he used the IRS, the Treasury and the DHS. This is not about anything but that.

And, of course, liberals such as yourself don’t CARE about abusing law abiding citizens as long as it is liberals abusing conservatives. Rights, laws and justice don’t override the political ends… dragging the greatest nation in the world into socialism.

@Greg: Obama is cupbible in all of the acts and should be indicted just like all his administration. Statute of limitations is at least 3 years and probably more.