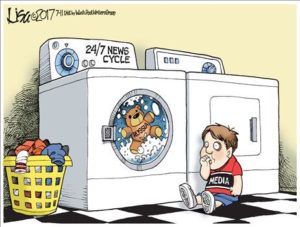 Greetings Mr. and Mrs. America, and all of our ships at sea! As we unofficially hit summer’s midpoint I hope that everyone is having a fun and safe one. But of course, stupid never goes on vacation, so let’s jump right in and start with two from the previous week that missed our deadline:

7/11 – What would happen to Tesla without subsidies, tax breaks for electric car buyers?

Apparently Elon Musk doesn’t like it when you point out his company would be bankrupt without subsidies. No wonder he was so angry over the Paris agreement!

Reminding us that Hillary and John Kerry aren’t the only nimrods we should be grateful lost their presidential elections!

Instapundit: “Wow, who knew the Civil War, Wilson cracking down on civil liberties during WWI, FDR’s Japanese internment camps, the Cold War, JFK’s assassination and Watergate were all pretty much small beans in comparison?”

7/16 – Tired of Being Wrong, Climate Alarmists Move Doomsday to Next Century

At least when our side’s doomsday cultists end up being wrong they generally go away. Their cult leaders demand more money.

“Celebrate the end of Osama Bin Laden with this T-shirt.” As much as I dislike Belichick and the Patriots it’s hard not to like him here…

7/17 – Tapson: The Left’s Next Step – Redefining ‘Hate Speech’ as Violence

This needs to be a post of it’s own. As others have written, “My violence is speech but your speech is violence”

Destroying an iconic character on the altar of PC? Marvel must be proud – imitation is the sincerest form of flattery!

7/18 – ‘Out’ Magazine to Readers: Drop Your Gay Conservative Friends

This weeks edition of “Your best bigotry comes from the Radical Left!”

The Radical Left – making America dumber one Memory Hole at a time!

Speaking of stupidity from Feminists…

I’m a bit disappointed. As I’ve said many times before, I support every gay couple’s right to marry in the mosque of their choice!

Bill, Bill, Bill. As I’ve said about the many changes that Climatistas want us to make to our lives, why don’t you lead by example?

And the public school system continues to advertise for the benefits of charter schools and homeschooling.

DNC: we will help you get better skills
Democrats: HOW DARE YOU IMPLY I AM ANYTHING BUT A SAINTLY VICTIM