A Story to be Buried: The Seth Rich Case (Guest Post) 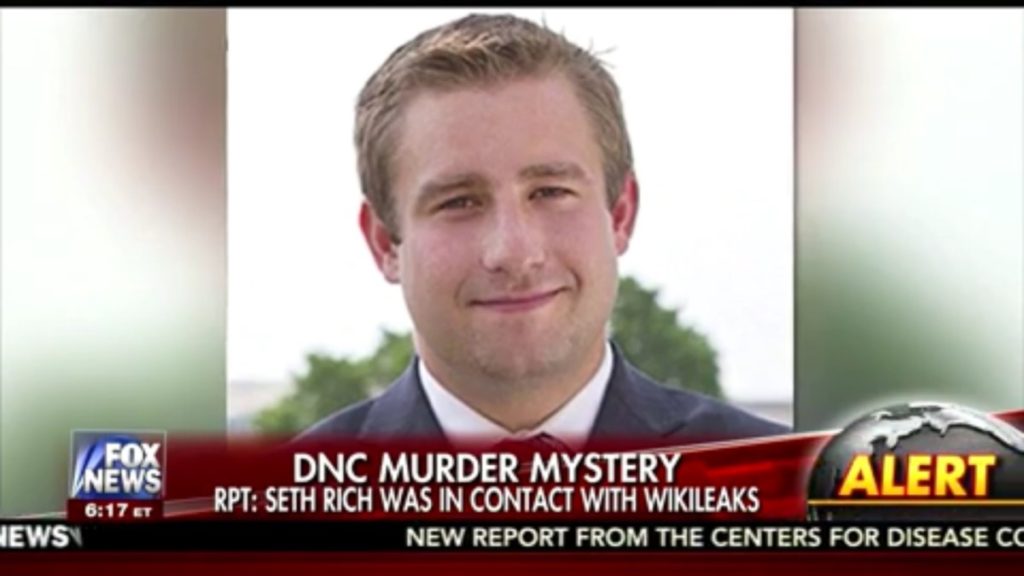 For almost a year now, we have heard the caterwauling from the Progressive/socialists and the sycophants that they have in the media about how President Trump has worked with the Russians to destroy our Republic. Started the day after the election loss of Queen Hillary, the Clinton team started first with blaming her loss on sexism. When that didn’t work the went to the theory of Russian collusion with the Trump administration. A few phone calls to the media and the friends that had hidden in the intelligence services, and with the help of the Obama administration, they have been bellowing ever since about how the Russians “hacked our elections. They claimed Trump himself were under investigation, that 17 intelligence agencies agreed with the opinion that the Russians had colluded with Trump to “steal” the election.

The question is, is this just a bad movie rerun, and do the people in this country believe the narrative? There will always be the die-hard socialist Hillary supporters who still believe is not the slimy criminal that her own actions have proven, but most people are now ignoring the MSM and talking heads breathlessly passing on fake news and outright lies to attempt to undermine Trump. Even CNN doesn’t believe this garbage as shown by James O’Keefe Project Veritas videos.

Let’s look at a few of the missteps made so far:

There weren’t 17 intelligence agencies that signed off on the opinion of collusion. It is now being told that there were four, a lie told by mainstream media for months. The report was actually made by only twelve intelligence agents who have not been named, and authorized by DNI Director James Clapper.

A former CIA analyst named Fred Fleitz told Fox News a handpicked group of 12 analysts were responsible for the US intelligence report which blamed Russia for “hacking the election” and believed it was “rigged” and “fabricated by pro- Obama intelligence officials”. What was produced was a report based on innuendo and not facts.

There have been numerous leaks about and information withheld from the Trump administration by the intelligence agencies following the idea that “I know what’s best for foreign policy and national security”. Words that were first spoken by Aldrich Ames, who was responsible for the death of over 100  agents in the 1990’s, and is applicable to many that are in our intelligence agencies today.

The FBI never saw the DNC Server supposedly hacked but allowed an organization with a dubious past to investigate the hack ( or leak) and report.  No second opinion was ever given, and no one in the government ever verified that information from Crowdstrike. This is the basis for the Russian narrative, second hand information from a company who had their chief counsel appointed by Obama to the post of commission on Enhancing National Cyber security. It was the DNC who refused to turn the server over to the government.

In essence there is no credible evidence of collusion, so now the Progressive/socialists have moved to obstruction. The question is now, who actually leaked these e mails? There are now many questions about who and when the information from the DNC and John Podestas e mails were made public. Everyone blames WIKILEAKS for making them available, but who gave them to Julian Assange? Both the Russians and Julian Assange have stated that they did not work together has not stopped the non stop wailing from those on the left and the media about Trumps supposed “crimes”.

There is another explanation which the media, the government, and the left refuse to discuss. They can’t discuss this, because it would show the criminal aspect of the left more than just the e mails.

The story that needs to be forced on those investigating is the story of Seth Rich. On July 10th, 2016 Seth Rich was mowed down in a Washington D.C. residential district, shot twice in the back of the head. Still alive when attended to in the hospital, he died soon after for unknown reasons. Noting was taken, his watch, wallet and phone still on the body. The Washington D.C. police unbelievably declared it a robbery turned homicide.

Just mentioning Seth Rich to the left causes panic and the intensified effort to delegitimize anyone who discusses it. The Washington Post slandered Newt Gingrich because he discussed it. Sean Hannity has been vilified, his advertisers threatened by the George Soros financed David Brock at Media Matters.  Even the original detective assigned to the Seth Rich murder investigation was contacted by Donna Brazile, former DNC chair and the one who gave CNN questions to Hillary during the debate and she demanded to know why he was working on the Seth Rich murder case. I don’t understand how this was in the purview of Brazile.  John Podesta is knee deep in this as well, as a leaked WIKILEAK e mail spoke of Podesta stating the any leaker should be “made an example of” whether or not we have any real basis for it.

One America Network placed a post on a online message board for information on the doctor on duty that night when Seth Rich died, within an hour the OAN website crashed.

They attempt to use their fascist tactics and economic terrorism to further the agenda of shutting down any investigation or even discussion of Seth Rich. This is all part of the plans that David Brock has promulgated to all that can help in destroying the Republic.

The fact that Seth Rich may have been the leaker is not proven, but it is instructive that the mere mention of his name brings the full force of the left down on anyone of any stature who mentions it. The left wants no investigation of the DNC and the socialist operatives who control it. A Seth Rich investigation would collapse the house of corruption that is the DNC and could very well uncover criminal acts committed by members of Congress and DNC operatives.

Julian Assange has offered a $20,000 reward for information leading to the arrest and conviction of the murderers. At this time there is no proof that Rich was the leaker, although there was communications  between WIKILEAKS founder Julian Assange and Seth Rich, reported to be 40,000 e mails in all.

The Seth Rich murder investigation originates in Washington, D.C. The Assistant US Attorney in the Attorneys office for Washington,D.C. is a man named Steven Wasserman who is the brother of Debbie Wasserman Shultz, the disgraced former DNC Chairman. The videos that could show what happened from surrounding establishments have never been seen, and supposedly no one knows where they are. The officers who responded to the Seth Rich shooting were wearing body cameras, where are the videos and have they been seen. The Metropolitan Police have said that all this footage was “lost”.

The Rich family, who originally asked for public assistance in finding their son’s murderer have since requested that the investigation be stopped. Could the reason for that be that they were “given” a new family spokesman, Brad Bauman, a professional Democrat Crisis PR spokesman?

The Mainstream media and Dem operatives, (I know, I repeated myself) call the Seth Rich murder a conspiracy pushed by the alt-right. I might be convinced to admit there is nothing there if the further questions could be answered.

There are files in FBI possession about Seth Rich coded: (SCRDC-408) that are heavily redacted. Why? And who has seen them?

Further investigation of the “Russia hacking” theory has shown that the metadata was likely done on a computer that had direct access to the data taken. The hacking also shows that the leaked material was copied in  the Eastern Time zone, conveniently the same time zone as Washington D.C. The speed of transfer of the data (22 mb/sec is unlikely to be used remotely over the internet. The left has made a great deal of denigrating Craig Murray, former British ambassador to Uzbekistan who received some of the leaks and stated that the leakers were not Russian and they were Leaks and not “hacks”.

Now , following the one year anniversary of the Seth Rich murder, the MSM is once again going full steam ahead to denigrate any and all who question the progressive/socialist narrative that they are promulgating to the public. Calling it a “far right conspiracy”, they still can’t answer the questions above or many others that are being asked. Being complicit may be the main reason why the MSM wants this story buried.