Trump Hunters: Episode 45: “This time we got him!” 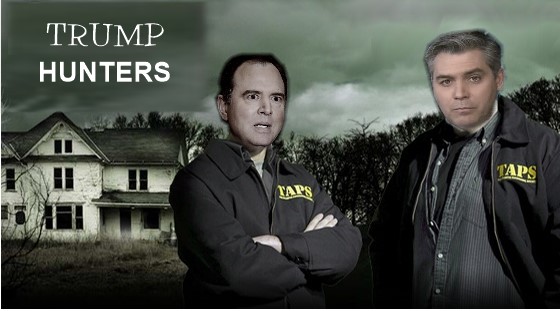 Watching liberals in the media stalk Donald Trump is like watching “Ghost Hunters”, “Expedition Unknown” or “The Hunt for Sasquatch.” With each episode they come oh so close to success, but it always remains just out of their fingers. Collusion escaped and Obstruction has disappeared. The newest bombshell was dropped in yesterday’s NY Times and was offered with a large dollop of gravitas:

The news was delivered by the New York Times in the breathless tones that might announce a cure for cancer or the discovery of life on Mars:

“President Trump’s eldest son, Donald Trump Jr., was promised damaging information about Hillary Clinton before agreeing to meet with a Kremlin-connected Russian lawyer during the 2016 campaign, according to three advisers to the White House briefed on the meeting and two others with knowledge of it.”

To which a rational response is … who wouldn’t? And also: So what? A third response is unprintable.

The Russian lawyer has absolutely no connection to the Russian government:

The Russian lawyer who has been thrust into the spotlight following reports of her meeting with President Donald Trump’s eldest son was a largely unknown figure until she began to represent the son of a Russian official in a major money-laundering trial.

Natalia Veselnitskaya’s name has not been linked to government officials, the pro-Kremlin political party or major pro-Kremlin NGOs. The law firm where she is listed as managing partner, Kamerton Consulting, is based in a Moscow suburb and does not even have a website. A staff member at Kamerton told The Associated Press Veselnitskaya was unavailable for comment on Monday.

See what they did there? The poor thing was “thrust” into the maelstrom she created.

She sought to meet with the Trump organization with the promise of information damaging to Hillary Clinton:

They first reported that Trump Jr., along with Paul Manafort (then the campaign manager) and Jared Kushner, the president’s son-in-law, met with Natalia Veselnitskaya, a Russian lawyer “linked to” the Kremlin, back in June, shortly after Trump had clinched the Republican nomination. The second claimed she’d promised dirt on Clinton and the Democrats in order to entice Trump Jr. and the others.

According to the younger Trump, the Clinton angle was just a ruse: “Her statements were vague, ambiguous and made no sense. No details or supporting information was provided or even offered,” he told the Times.

The real reason, it seems, was that Veselnitskaya wanted to lobby for the repeal of the Magnitsky Act, an Obama-era law that allows the US to deny visas to Russians thought guilty of human rights violations. In retaliation, the Russians promptly ended the adoption of Russian orphans by Americans.

Of course the liberal media has gone postal over this.  Problem is, there’s nothing there. It may even turn out to be another one of those left wing dirty tricks:

We have learned from both our own investigation and public reports that the participants in the meeting misrepresented who they were and who they worked for. Specifically, we have learned that the person who sought the meeting is associated with Fusion GPS, a firm which according to public reports, was retained by Democratic operatives to develop opposition research on the President and which commissioned the phony Steele dossier.

During the meeting Veselnitskaya raised the issue of restoring U.S. adoptions inside Russia if the United States would repeal the Magnitsky Act, a law passed in 2012 punishing Moscow for human rights violations in connection with the death of a lawyer who had discovered a massive money laundering scheme inside the country.

Vladimir Putin has long reviled the Magnitsky Act and fought to have it repealed. And according to letter from Senate Judiciary Committee chairman Charles Grassley, the Kremlin’s main fight against the law was led by Veselnitskaya’s client, Katsyv.

Another player in the Russian influence scandal, the U.S.-based political firm Fusion GPS, was also involved in helping Prevezon, Katsyv and Baker Hostetler, according to the Grassley letter. Fusion has been a major focal point of the FBI and Congress because it hired a former British intelligence agent named Christopher Steele to produce a salacious intelligence dossier that made wild and still unsubstantiated claims about Trump ties to Russia.

Yes it was Fusion GPS who commissioned the discredited and salacious dossier that you may have seen in Episode 24 of Trump Hunters. democrats rode that horse until it died for lack of substance. Now Fusion is stonewalling Congress.

A secretive Washington firm that commissioned the dubious intelligence dossier on Donald Trump is stonewalling congressional investigators trying to learn more about its connections to the Democratic Party.

The Senate Judiciary Committee earlier this month threatened to subpoena the firm, Fusion GPS, after it refused to answer questions and provide records to the panel identifying who financed the error-ridden dossier, which was circulated during the election and has sparked much of the Russia scandal now engulfing the White House.

They probably have good reason for doing so:

“These weren’t mercenaries or hired guns,” a congressional source familiar with the dossier probe said. “These guys had a vested personal and ideological interest in smearing Trump and boosting Hillary’s chances of winning the White House.”

Moreover, federal records show a key co-founder and partner in the firm was a Hillary Clinton donor and supporter of her presidential campaign.

In September 2016, while Fusion GPS was quietly shopping the dirty dossier on Trump around Washington, its co-founder and partner Peter R. Fritsch contributed at least $1,000 to the Hillary Victory Fund and the Hillary For America campaign, Federal Election Commission data show. His wife also donated money to Hillary’s campaign.

democrats ought to be proud of the kind of garbage they had created:

Donald Trump arranged for a group of prostitutes to urinate on the Moscow hotel bed where the Obamas had slept, according to sensational reports in the US.

The President-elect engaged in ‘perverted conduct’ because he ‘hates’ Barack and Michelle Obama, it is claimed.

James Comey and the FBI used the dossier to get FISA warrants to investigate Trump. That is in part what it was supposed to do. I look forward to seeing the principals of Fusion GPS testifying before Congress about their connection to the DNC and Hillary Clinton.

Any democrats harrumphing about the ethics of the Trump Jr. meeting should have socks shoved in their mouths. After that dossier, it’s clear democrats wouldn’t recognize ethics if they were bit in the ass by them.

Since the president took office, Trump Jr. and his brother Eric have assumed day-to-day control of their father’s real estate empire. Because he does not serve in the administration and does not have a security clearance, Trump Jr. was not required to disclose his foreign contacts. Federal and congressional investigators have not publicly asked for any records that would require his disclosure of Russian contacts.

Stay tuned for the next thrilling episode of “Trump Hunters.” They’re sure to get him then.

I can’t help but wonder if the Trump bros didn’t let this drop as just another way to make the lsm look even sillier. The Trump organization has been making fools out of the press since the campaign started. I feel they have been quite successful. Trust in the lsm is at its lowest level in years. With the limited intelligence “journalists” usually have (I remember j school majors being some of the biggest party animals on campus-along with the education majors) they just can’t figure out they are being played by a master.
This is getting to be a political comedy better than any of the formula series dominating the channels.

Obama’s incompetence proved to be his own worst enemy. Liberals appear not willing to wait and see if Trump ever does anything that can legitimately be used against him.

Wrong TV show.
It is The A-Team, with Mueller playing the part of Col. Decker and DJT as Hannibal Smith.
Each episode ends the same way!

Medical malpractice swings and misses again.
The love of Trump and his deplorable supporter for Russia over US is amusing.

@CantModerateMe: Explain the example of Trump loving Russia over the US please, Phlipping Moron.

@Deplorable Me: It’s very humorous to me. the press has nothing so they get suckered into every bog in the swamp. I’ve heard the word ‘collusion’ so many times and no one seems to know the meaning. It means ‘to talk’. It is not against the law for an American citizen to talk to a Russian, or an Englishman or a French man. Or a citizen of any country. It’s strange that as many conversations as the Clintons have had with non US citizens, they would understand that it is not illegal. The are desperately digging, no bottom in sight

They’re like the carp in Lake Rhoda (Lakeside Amusement Park) that jump all over themselves when someone drops once piece of popcorn into the water that I saw when I was a kid. A feeding frenzy on anything that even smells like collusion.

@Redteam: Those were conversations in which HUGE sums of money changed hands. Nothing to see here.

Those were conversations in which HUGE sums of money changed hands.

Yes, that’s how the Clinton’s got their huge sack full of money. I see where the Prime Minister of New Zealand contributed 10 million to HIllary. I’m not sure if it was for her election or just her pocketbook. Somehow, I suspect it was related to attempting to buy influence. Now if that had been Trump? Katie bar the door.

So you’re saying he has some inside information? Some source as to know what the inside track is on the Senate Russian Probe? How could he possibly know, for a fact, whether it is or is not a witch hunt? Seems as if you and he are saying there is really no need for an investigation, we already know the details of what happened. Why would he continue to pursue an investigation, if confirmed, if he already knows the details.

Collusion, I’ll go with that dictionary definition. So we can say that when the New Zealand prime minister and Hillary met and he gave her 10 million dollars, that there was likely some ‘collusioning’ going on?