An Introduction to Fifty Thousand Years 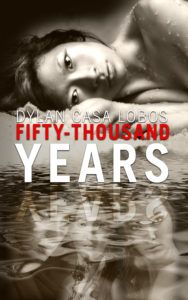 We modern humans are smug about our progress through time. No longer do we hunt, kill, and build a fire to enjoy our dinner. We don’t make love in desperation and hope we live to see the sunrise; however, we have retained certain behavioral patterns and personality traits from those early days, and they remain ingrained in our personalities and cultures. Yes, we advanced and changed everything around us, making it possible for the weak and silliest among us to thrive. Yet, despite our advances and pretenses of modernity, we are the same basic creatures who sought shelter in caves and worried about having a meal the next day. These were our ancestors and it is who we are.

During a glacial maximum of a more recent Ice Age, fifty thousand years ago, there was massive drought throughout the world. The ice fields covering most of North America, Europe, and Asia, were a mile high, and had a great thirst for the earth’s water. Thus a large percentage of the world’s water was locked in ice. Oceans were one hundred and forty meters more shallow and the coastlines of the continents extended a hundred to three hundred kilometers farther out. The lush, green valleys of North Africa, home to many of the earth’s ten thousand people, were becoming deserts. Faced with migration or starvation, the human race was on the move.

There were rumors of great rivers with rich bounties of fish, vast sources of edible plants, and many animals to hunt on the Mammoth Steppe. One of the world’s greatest biomes, this vast grassland was south of the ice, for several hundred kilometers, and stretched from Spain to the Yukon. Many tribes had already left Africa; some of them were capable of hunting the mammoths and mastodons and other large dangerous animals that thrived on the Mammoth Steppe. Over generations, these hardy Stone Age people enjoyed a protein-rich diet, and became virtual giants. As dangerous as the animals they hunted, they were territorial and known to kill intruders. There were also Near People or Neanderthals, who could effortlessly crush a man’s chest with beastly power. Water and life was near the ice; to survive the changing climate of a harsher, colder world, people had to adapt or die.

This story follows the migration of a family through the maternal line, by tracing a strain of mitochondrial DNA. This particular strain of DNA was unique because it gave a few women uncommon intellect and creative abilities, beginning with the skill to sculpt magnificent tools from flint. These well-made tools became valuable trade items and often kept tribal members from starving, by trading tools for meat with the unpredictable mammoth hunters. These gifted women also provided ideas and creative solutions during times of crisis. We, the readers, get a realistic view of life during the primitive eras and an appreciation of how fragile our veil of civilization is.

Our ancestors explored the earth, in a desperate search to find reliable sources of food. To eat, make love, have children, and watch them mature—these were measures of success, in a world of frequent tragedies and brief moments of joy. The story of survival begins 50,000 years ago and we can follow these women as they walk through time, and into the modern era, facing adversity and reality as providers and problem solvers.

Fifty Thousand Years is available as an ebook with Amazon. It is supposed to be out in paperback at any time. Of course it raises many controversial issues and will hopefully cause the PC crowd to regroup. If you aren’t involved in controversy, it’s a great story with many themes and twists of plot.

If you buy it, please write a commentary on Amazon

. It is like pruning a tree, cut a branch and grow seven.

I will be back to my old haunt, here FA, but with wild ideas and stories. I have too many stories and not enough time to write them down.

Dylan Casa del Lobos is a pen name and an old family name.