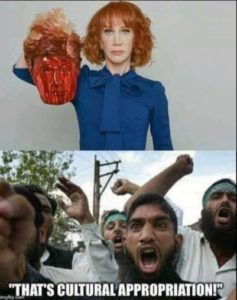 Happy start of summer, everybody! Another week, another day of the Radical Left reminding us how grateful we should be that the enabler of the world’s most famous sexual predator is not our president!  Let’s jump right in…

The week started off with the long Memorial Day weekend, where the nation comes together to appreciate our brave members of the military who gave their lives defending our freedom, right? Not at Vox!

Not to be outdone…

5/29 – On Memorial Day, Trump Does Something That Would’ve Put Obama on Every Front Page

Yep, you read that right! Students get caught on camera throwing a fit and harassing their professors, then get upset that they got caught! This reminds me of a trick that an old friend of Sister Babe’s showed us when Little Bob was a toddler and threw the (thankfully) occasional tantrum – film them on your phone and play it back to them while they’re still screaming. Maybe these kids could have used that treatment!

By now there are few people in America who haven’t heard about Kathy Griffin culturally appropriating ISIS culture for a snuff picture. This particular link that I’ve shared shows Mark Dice ridiculing the stupidity of the reactions by the CNN talking hairdos.

I’m old enough to remember when “Security Force to protect” was called “local law enforcement”. Where is the civil rights lawsuit?

This week’s edition of your best bigotry coming from the Radical Left!

As Kathy Griffin’s career drowns, she calls for her lawyer to throw her an anvil and declare that the real victim in this is… Kathy Griffin! And I’m not even going to address the vile glee that we saw from Radical Leftists over an 11 year old boy being distraught over seeing an image of his decapitated father on TV… #LoveWins!

Have a great weekend and be safe!

Democrats who disbelieve the Barron Trump story insist it's impossible that a preteen saw the most shared image in the world yesterday.

amusing that a media which stealth-corrects its errors and never admits them openly is indignant about Trump following their example.

— Ursus, Director of Weather and Banana Programming (@AceofSpadesHQ) May 31, 2017

Flash #DavePoll: what was your first reaction to the Kathy Griffin controversy?

#YouMightBeALiberal if crosshairs on a map were a violent threat to Gabrielle Giffords, but a pic of a decapitated president is no big deal.

Breaking: People who didn’t vote for and will never vote for Trump are very disappointed in Trump.

kathy griffin, the crying leftist slut, can face 3ed degree felony charges for threating the President. yes, the current AG will kill her alleged career in the future. the useless climate, bullshit, was executed as an executive order and not ratified by congress, surprise, executive orders can be cancelled like everything the radicalized muslin terrorist did for the last eight years.
if one looks at the financial gains to this country, the funding will help rebuild a great deal of the sagging material infrastructure of this country. were any of the snowflakes that China built a beautiful four lane highway crossing Jamaica-now it is a toll road.
Edward Gibbon’s seminal six volume on The History of the Decline and Fall of the Roman Empire notes that same lamenting by the liberal snowflakes in Rome. I would refer one to a recent article in American Thinker by Brian Joondept concerning the modern day analysis of one of Aesop’s fables “the boy who cried wolf.” you remember who Aesop was or even
Thucydides or Heraclitus were, probably not.

Liberals and eco-freaks are upset becuase trump pulls america out of that rediculous Paris Agreement such liberal idiot groups like the NRDCGREENPEACE,SIERRA CLUB,AUDUBON SOCIETY,EARTH JUSTICE and the usial celeberty idiots Leonardo DiCaprio,,Luarie David,Al Gore,Robert Kennedy Jr,John Travolta just to name a few as well as the New York Slimes

What a week indeed, I cant wait to see what self implosion happens this coming week. Wheres the post on Megan Kelly being handled by Putin, there has to be a pill for the liberal hysteria lol.

Can you imagine if Rush Limbaugh did the same with Obola?? It’s really sad to wee how disgusting Trump Derangement Syndrome has gone. Shame on the Demoncraps and Demoncrap Party for being so disgusting!! There will be an end to this and it won’t be a pretty sight. The beginning has been great with Donald Trump becoming President!! I have enjoyed watching hilldabeast trash the DNC though!!

@MOS #8541: Have you got a link to the American Thinker post? I did a quick search of Joondept’s archive but didn’t see it jumpong out at me

@kitt: I can’t post every bit of Libtarditude – there are only so many hours in a day! =8^)

@Spurwing Plover: Of course, the people screaming the loudest are the same ones who would never dream of giving up their energy guzzling jets or palaces. As the saying goes, I’ll believe it’s a crisis when the people who say it’s a crisis start to act like it’s a crisis

@Common Sense: I probably should have posted the link to where the DNC data guy fired back at Hillary. There just aren’t enough hours in teh day to capture all of the stupid…

Coming this week, another candlelight vigil this time London bridge, more flowers blocking traffic, Being told it wasn’t realmuslims, being told at least 1 of the attackers was known by intelligence sources or just came back from a terrorist stronghold. Also Love and tolerance will save us from these attacks in the future. Lights camera action the whitehouse, and eifle towerwill be lit in solidarity.

@kitt: I should have something up tomorrow or Tuesday night on the attacks – stay tuned!