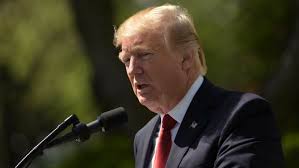 June 1, 2017 President Trump stood at a White House podium and announced that he was standing up for America, for Americans, and for American jobs.  He proved he was against the globalist, no-border crowd occupying much of California and New York, as well as Europe, as he withdrew from the Paris Climate Agreement.  President Trump’s stand even drew Goldman Sachs CEO Loyd Blankfein out of his globalist closet long enough for his first tweet ever, stating “today’s decision is a setback for the environment and the U.S.’s leadership position in the world.”

The simple fact that the control agent of the world’s banking system, Goldman Sachs, is so vocal against the President’s decision should convince you that it’s the right decision for all Americans, even those who don’t support it and don’t really know why.

We’re now in for more boring and too often catatonic flailing from the MSM which will assert that the world is ending, that Miami will drown as a direct result of the decision, and that our children will have no air to breathe.

Goldman Sachs would benefit hundreds of billions of dollars as it would deliver and “manage” the system that would be at the heart of the engines which would control the cash redistribution – cash moving from the U.S. taxpayers to African and Asian countries. There is much cash to be made in the carbon tax and climate change industry.

But, you say, the U.S. pollutes less today than it has in a century, and in fact has made greater strides than any major country to clean-up its air. Doesn’t matter to the globalists, propagandists and their convenient faithful. With emotion, anger, and self-righteous indignation, we will be told that America, the world’s industrial leader, must be punished for having polluted the air for a century, as well as for having been a colonialist. Apparently, African countries cannot join the developed world because America polluted the air, and changed the climate in Africa.   The unfounded arguments and assertions will be are absurd as all of the over-the-top lies we have been treated to since President Trump was elected —  more self-hatred coming from the left. Argue with them and you’ll automatically be accused of racism – guaranteed.  Try it.

There is little point in insisting that Obama has no right to enter America into such a Treaty without Congressional approval.  It serves little to indicate that America and American taxpayers cannot afford to enter into such a totally unbalanced and senseless agreement.

Globalists seek to move power away from America, and place in a remote location like Brussels, where foreigners can decide the fate of Americans.