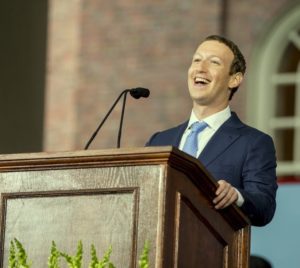 Uninhibited by evident, even glaring hypocrisy, Mark Zuckerberg told a fresh crop of Democrats graduating from the Harvard romper rooms this week, “We should explore ideas like universal basic income to give everyone a cushion to try new things.”

He treated them with other nonsense and simplistic oration that he couldn’t help but inflict on the naive audience in promotion of Facebook, such as championing globalism and claiming that nationalism is “the struggle of our time.”

Apparently he has too much time on his hands since he dropped his lawsuit against the Hawaiians who were peacefully complaining  and demonstrating against the “wall” he was building around his 700 acre estate on Kauai, and around parcels of land long-owned by local Hawaiians and passed down through generations of Hawaiians (see Kuleana Act of 1850)  –  “What? Your ancestors didn’t pass-down to you a DEED of ownership? They didn’t have typewriters or computers?  Get out of my wall’s way. I bought this land. I own it.  Now, let’s talk about my magnanimity, global warming and globalism and let’s ignore economic metrics like GDP.  If the government pays you for doing nothing, you’ll come up with genius ideas like mine.”

Zuckerberg seems as lost as Bill Gates proved to be when he decided to dabble in education – remember when Gates dabbled with billions of misguided dollars?  Billions purposely thrown by sadly uninsightful minds to derail young malleable minds. Gates might look into the nature of “discovery learning,” and so should Zuckerberg.

Wall Street has made Zuckerberg a billionaire and as a result, the media believes that whatever oozes out of his mouth must be worth a billion dollars.  All of the MSM has jumped aboard the Zuckerberg/Facebook advertorial train selling his Marxist ideas, while at the same time this same MSM is advertising the nauseating Obama sermons on globalism and redistribution, concurrently being delivered in Europe.

The left, all of it, is no longer capable of self reflection, analysis, and understanding.  Some of it cannot comprehend that human nature prefers to self-actualize. The rest of the left cannot allow itself to change the source of its wealth — the “woe is me” diatribe with which it has indoctrinated millions has created a dysfunctional co-dependent culture infecting half of the Nation.  In this ethos of victimization, personal responsibility has been abandoned and slothful intellects have woefully replaced it with blame.

Most of them don’t realize that socialism/communism belittle the individual and his, or her importance.  Creativity, initiative, entrepreneurship are undermined and suppressed.  Human decency inherent in the individual, and stirred by personal judgment loses itself in the morass of the great blob that is the communistic mindset.  Bullying, hate, betrayal of neighbors, and even homicide become acceptable, or sanctioned.

Across America too many are now convinced that big government will look after them from their births to their passings.  The indoctrination has moved toward action in the form of violence against those who espouse any form of freedom – freedom of the self, freedom of thought, freedom of speech, freedom of vote, or freedom of nation.  The fourth estate has applauded, even participated, to become part of the “story”.

We are all witnessing the rapid momentum of communism, as we slide toward that place where freedom and communism do not and cannot co-exist.

Calling Zuckerberg’s declarations “witless” might be accurate, but hardly enlightening.  So let’s diagnose them more precisely as being abhorrent and injurious to a great Nation where half of the inhabitants do not wish to consider themselves victims, still understand the meaning of freedom, and actually care to preserve that freedom.

Let’s pay greater attention to a more insightful mind of Dr. Ben Carson, who said this week, “I think poverty to a large extent is also a state of mind. You take somebody that has the right mindset, you can take everything from them and put them on the street, and I guarantee in a little while they’ll be right back up there. And you take somebody with the wrong mindset, you can give them everything in the world, they’ll work their way right back down to the bottom.”