As long as England keep welcoming terrorists in, it must get used to the bombings 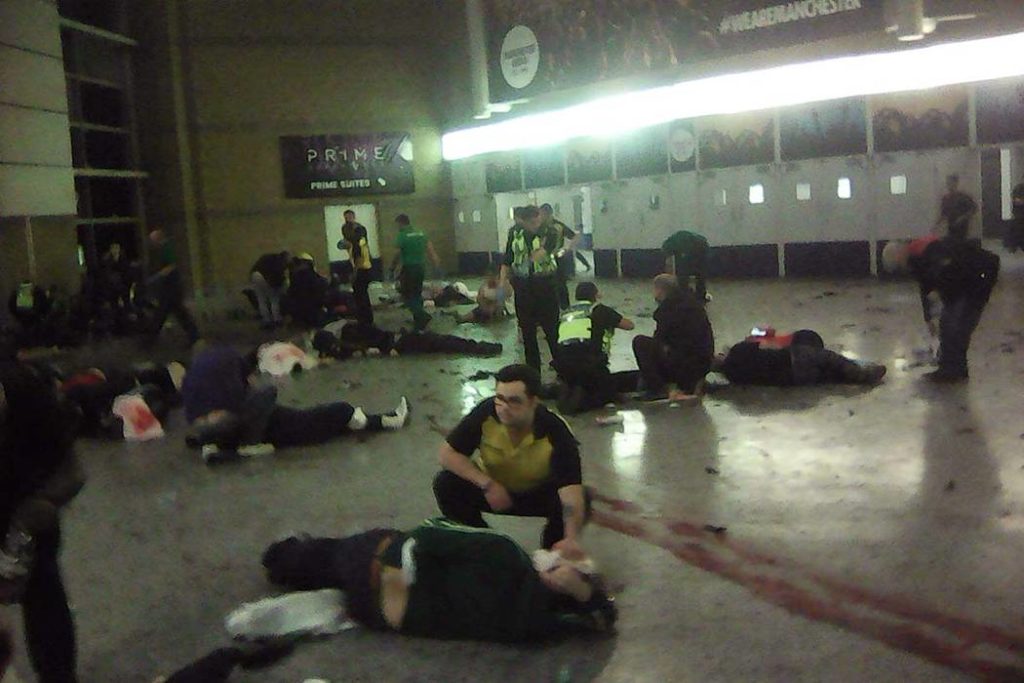 The horrific attack in Manchester England has thus far taken 22 lives– including children and young women. Prime Minister Theresa May has declared that courage will ultimately win the day:

‘The liberal pluralistic values of Britain will always prevail over the hateful ideology of the terrorists. They proved that cowardice will always be defeated by bravery.’

Mrs May closed her statement saying the spirit of Manchester and Britain as a whole showed the terrorists would not win, and branded atrocities such as last night’s ‘sick plots’.

She said: ‘That’s why the terrorists will never win, and we will prevail.’

When? And at what cost?

That’s not much comfort for the families of those who lost loved ones. As part of that bravery May has declared the treat level to “critical” and also is deploying 5,000 troops to the streets of England.

Many in England are wringing their hands in despair. Again. Katty Kay of the BBC says that Europeans will simply have to get used to the bombings.

“Europe is getting used to attacks like this, Mika. They have to, because we are never going to be able to totally wipe this out,” Kay said.

“As ISIS gets squeezed in Syria and Iraq, we’re going to see more of these kinds of attacks taking place in Europe and Europe is starting to get used to that.”

Get used to it.

It has been reported that  Abedi, born in Manchester to Muslim immigrant parents, was known to authorities:

The Evening Standard reported the bomber, who has not immediately been identified by authorities, “was known to security services but they did not believe he posed an immediate threat”. Islamic State has claimed responsibility for the attack online.

He reportedly made “family trips” to Syria, where he was presumably trained by ISIS.

This didn’t raise any red flags? This brings us to the stupidity part of our report.

England welcomes terrorists.  Even after they’ve fought for ISIS.

Latest figures show the 3,000 potential terrorists monitored since 2015 has grown after the return of UK-born people who left to fight with ISIS.

About 400 ISIS-trained fighters are believed to have returned from war zones in Syria and Iraq.

Despite being on red alert for more attacks on home soil like last night’s Manchester bombing, new statistics show the number of arrests, stop and searches, and examinations of suspected terrorists at ports and airports dropped in 2016 on the levels seen in 2015.

This comes at the same time the number of people arrested on suspicion of plotting terror strikes on British soil has grown by eight per cent.

400 ISIS trained fighters have returned to England from Syria and Iraq.

Who is the idiot who allows them to return? But this is England. England has a history of sacrificing its own for the sake of noblesse oblige.

It is becoming clear that the common thread in the terror threat is the offspring of Muslim refugees from the Middle East: the Tsarnaevs are a perfect example. Omar Mateen is another. So is San Bernardino shooter Syed Rizwan Farook. And so was Salman Abedi.

So yes, this is going to continue. Terrorism continues because it works.

But no matter how terrorism works, the reality that it does will make it difficult, if not impossible, to stem its malignant spread around the world. To make it not work, the entire world must unite in never rewarding terrorism and always punishing those who facilitate it.

Terrorism also works because England welcomes back its home grown terrorists and then refuses to follow them closely. We’re not much better.

So get used to it.