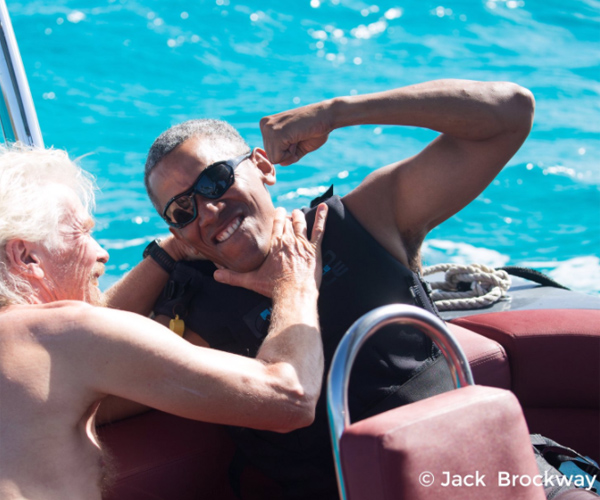 Out of office, barack obama has shed his phony “common man” skin. He now cavorts with his real peeps- the uber-rich, the uber-elite.

After spending nearly $100 million taxpayer dollars on vacations over the course of 8 years (see “Obama’s Vacation Costs Expected To Top $90 Million Over 8 Years“), Obama couldn’t wait to retire to go on even more vacations.  In fact, the Obamas wrapped up their last official $4 million, taxpayer-funded trip to Hawaii on January 2nd, then departed the White House on January 20th and headed straight for Palm Springs for some golf just before joining Billionaire Richard Branson on his private island in the British Virgin Islands.

Of course, the pictures that have emerged are sure to give Chris Matthews, as well as many of his other colleagues as MSNBC, that old fashioned “thrill up the leg” as they long for the good ole days under Obama rule.

He’s signed a highly lucrative book deal and he’s entitled to it. It does, however, make you wonder. He did say that ” I do think at a certain point you’ve made enough money.”

He’s reportedly getting $60 million for the book deal. Apparently that’s not “enough money.” obama will speak to “fat cat” Wall St bankers in September for $400,000.  It is likely just the start of the parade. obama raised more money from Wall St. than any other Presidential candidate in history. In return, obama protected them and now they’re going to pay him back for their successful investment.

In 2009 obama campaigned with the promise

“I did not run for office to be helping out a bunch of fat cat bankers on Wall Street.”

“I intend to hold these banks fully accountable for the assistance they receive, and this time, they will have to clearly demonstrate how taxpayer dollars result in more lending for the American taxpayer,” the president said. “This time, CEOs won’t be able to use taxpayer money to pad their paychecks, or buy fancy drapes, or disappear on a private jet. Those days are over.”

“Tonight, I’m asking my Attorney General to create a special unit of federal prosecutors and leading state attorneys general to expand our investigations into the abusive lending and packaging of risky mortgages that led to the housing crisis.  (Applause.)  This new unit will hold accountable those who broke the law, speed assistance to homeowners, and help turn the page on an era of recklessness that hurt so many Americans. Now, a return to the American values of fair play and shared responsibility will help protect our people and our economy.”

It was all bullsh*t. obama was dead set on protecting those responsible– the fat cat bankers:

The CEOs went into their traditional stance. “It’s almost impossible to set caps [to their bonuses]; it’s never worked, and you lose your best people,” said one. “We’re competing for talent on an international market,” said another. Obama cut them off.

“Be careful how you make those statements, gentlemen. The public isn’t buying that,” he said. “My administration is the only thing between you and the pitchforks.”

It was an attention grabber, no doubt, especially that carefully chosen last word.

But then Obama’s flat tone turned to one of support, even sympathy. “You guys have an acute public relations problem that’s turning into a political problem,” he said. “And I want to help. But you need to show that you get that this is a crisis and that everyone has to make some sacrifices.” According to one of the participants, he then said, “I’m not out there to go after you. I’m protecting you. But if I’m going to shield you from public and congressional anger, you have to give me something to work with on these issues of compensation.”

Now it’s time for obama to collect. The NY Times laments obama becoming one of the usual elitists:

Indeed, it’s the example he set that makes it jarring to see him conform to a lamentable post-presidential model created fairly recently, in historical terms. Since Gerald Ford enriched himself with speaking fees and board memberships after leaving office, every former president but Jimmy Carter has supped often at the corporate table. It’s not beyond imagining that Mr. Obama could break with a practice whose ills he observed so astutely, and which contributed to the downfall of the Democrat he hoped would cement his legacy. The tens of millions that Hillary Clinton raised from speaking to corporate interests most likely haunts her now — or should.

obama always considered himself to be one of them. He just played a commoner on TV.  None of this is surprising to some of us. After all, obama spent eight years depending on the stupidity of his supporters.

Not long ago obama was whining about wealth and income inequality. Today obama is the poster child for wealth inequality. It’d be nice if someone were to ask him when he’s made enough money.

Despite her faux disappointment over obama’s Wall St. bonanza, Massachusetts Senator Pocahontas still doesn’t want to cut him open as she does Republicans.

Aw, that’s sad. Some lemmings actually BELIEVED what Obama said. Perhaps his remarks on Fast and Furious, Deepwater Horizon, the IRS targeting scandal, Benghazi, Obamacare, Iran, Iraq, the economy and pretty much any other time he opened his mouth should have given them a clue.

These people deserve to have their money pissed away on this idiot.

Good for him if the dopes havent learned anything about paying Bill and Hillary they just have a sloooow learning curve. Yes he has a foundation just like Hillary, wont lower himself to vacation with regular folk. The total $$ for vacations does not include security costs. So the next time the libs whine about Trumps southern White House just snicker and ignore them.
Love the pic he has taken gun control personally.

He knows he will be caught. He didn’t go to the French Polynesian islands to write his ‘memoirs’ for nothing. The French do not have an extradition treaty with the US.

Yeah all those idiots who donated to obama their certianly not our neighborhood bankers their all thse whos wealth would make Lady Penelopy,Richie Rich and Scrooge McDuck look like Puapers