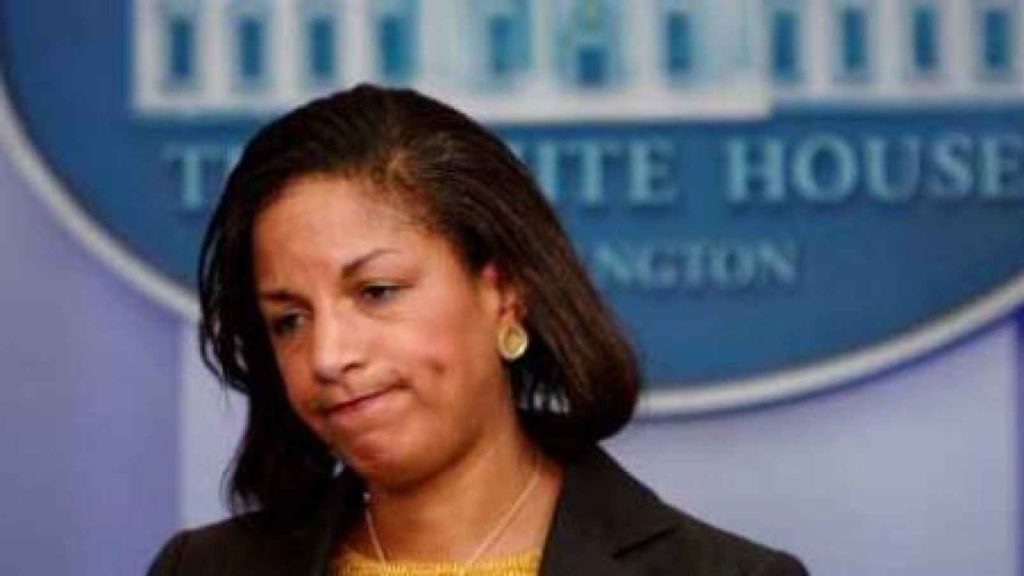 Susan Rice is a liar. We need to establish that as the baseline. She apparently unmasks the names of Americans caught up in surveillance matters, especially if their names rhyme with “bump.”

Next, Andrew McCarthy (who knows a few things about this)

In general, it is the FBI that conducts investigations that bear on American citizens suspected of committing crimes or of acting as agents of foreign powers. In the matter of alleged Russian meddling, the investigative camp also includes the CIA and the NSA. All three agencies conducted a probe and issued a joint report in January. That was after Obama, despite having previously acknowledged that the Russian activity was inconsequential, suddenly made a great show of ordering an inquiry and issuing sanctions.

So why would Rice need to unmask Americans identities if the other agencies did not? Let’s go to Rice:

Let me explain how this works. I was the National Security Advisor. My job is to protect the American people and the security of our country. That’s the same as the Secretary of State, the Secretary of Defense, the CIA director. And every morning, to enable us to do that, we received from the intelligence community a compilation of intelligence reports that the IC, the intelligence community, has selected for us on a daily basis to give us the best information as to what’s going on around the world.

She’s a political appointee. A dishonest one at that. Someone needs to explain how her judgment is more finely honed than the NSA or the CIA. Neither agency found it necessary to unmask Trump, his family and his aides.

But she did.  And it had nothing to do with Russia. So what was the justification? Apparently she thinks Trump is going to bomb America:

But let’s say there was a conversation between two foreigners about a conversation they were having with an American, who was proposing to sell to them high-tech bomb making equipment. Now, if that came to me as National Security Advisor, it would matter enormously. Is this some kook sitting in his living room communicating via the internet, offering to sell something he doesn’t have? Or is it a serious person or company or entity with the ability to provide that technology perhaps to an adversary? That would be an example of a case where knowing who the U.S. person was, was necessary to assess the information.

So when that occurred, what I would do, or what any official would do, is to ask their briefer whether the intelligence committee would go through its process — and there’s a long-standing, established process — to decide whether that information as to who the identity of the U.S. person was could be provided to me. So they’d take that question back, they’d put it through a process, and the intelligence community made the determination as to whether or not the identity of that American individual could be provided to me.

She is implying that Trump wanted to bomb the US or sell bomb technology to a foreign entity.

Heady stuff. Then she states:

We’d only do it to protect the American people, to do our jobs in the national security realm. That’s the only reason.

What was it about Trump that threatened national security? From what was she protecting the American people? What did she know that the CIA and NSA did not? Inquiring minds want to know.

And if all this was true, why did she lie about it?

What exactly was the threat?

Rice went straight to Andrea Bitchell of PMSNBC because she knew she’d get a warm reception and the opportunity to avoid the real questions.

One needs to put Rice in the proper context based on her past statements.

She blamed the video for the Benghazi attacks.

She said Bowe Bergdahl served with honor and distinction.

She said she knew nothing about the unmasking.

And the cherry on top- she had the audacity to  lecture Trump about making false statements.

Susan Rice is a lying, deceitful political hack. Put her under oath so we can watch eight hours of someone pleading the 5th.

Login
wpDiscuz
47
0
Would love your thoughts, please comment.x
()
x
| Reply
‹ Back to Categories