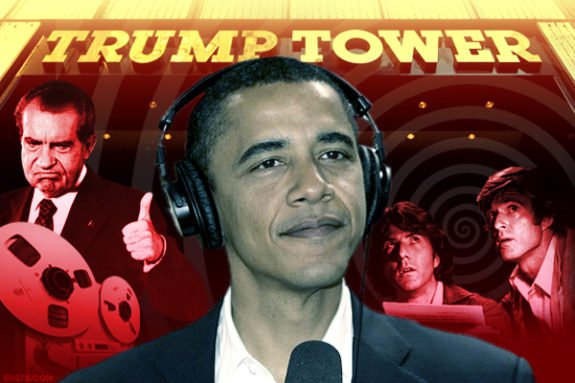 The pieces are falling into place.

It is quite a spectacle. AOL this morning offered a poll showing that people want a special prosecutor to look into the Trump-Russian connection. It’s no wonder, given the daily bombardment of innuendo the networks drop on viewers. Never mind the constant insults by the late night idiots and even reporters. Scott Pelley has completely abandoned pretending to be a journalist. CBS This Morning hammered Trump again today and Matt Lauer was nasty to Chris Christie.

Let’s back up a second.

Let’s remember that this is the same garbage media that didn’t question what Putin had on obama, despite obama’s repeated obsequiousness toward Putin. This is the same garbage media that let slide the Hillary-Bill-Russian nexus with Bill getting $500,000 for two minute speech and the coincidence of more than $145 million subsequently pouring into the Clinton Foundation while US uranium stockpiles were being sold to Russia.

Also today two democrat Senators (Burr and Warner) suggested that the investigation into the Trump-Russia connection was the most grave in the history of the country.

What is it that the Russians are supposed to have done with Trump? Have you heard anyone specify what that is?

So what do we know? We know that there was no alteration in vote tallies. I have yet hear anyone admit that their vote for hillary was changed to Trump because of the Russians- and I have asked.

We also know that a crime was committed. Gen. Michael Flynn was unmasked as a participant in a conversation with Russian Ambassador Sergey Kislyak. We do not know yet who did it or who leaked it but FBI Director Comey said it could have been the White House or the DOJ.

As I said, more pieces are falling in to place.

At the very end of his Presidency, obama altered the rules so that a very large number of agencies could get access to the identity of Americans who normally would remain anonymous:

And in his final days in office, Obama created the largest ever expansion of access to non-minimized NSA intercepts, creating a path for all U.S. intelligence to gain access to unmasked reports by changes encoded in a Reagan-era Executive Order 12333.

The government officials who could request or approve an exception to unmask a U.S. citizen’s identity has grown substantially. The NSA now has 20 executives who can approve the unmasking of American information inside intercepts, and the FBI has similar numbers.

And executives in 16 agencies — not just the FBI, CIA and NSA — have the right to request unmasked information.

“This raises serious concerns that agencies that have responsibilities such as prosecuting domestic crimes, regulating our financial policy, and enforcing our immigration laws will now have access to a wealth of personal information that could be misused. Congress needs to take action to regulate and provide oversight over these activities,” ACLU legislative counsel Neema Singh Guliani warned in January.

Which would explain how there were nine separate individuals from different agencies who could confirm Flynn’s conversations with Kislyak.

We also learn that the outgoing obama administration was scooping up as much information on the Trump team as possible before they left.

A former top Obama administration official has acknowledged efforts by her colleagues to gather intelligence on Trump team ties to Russia before Donald Trump took office and to conceal the sources of that intelligence from the incoming administration.

Evelyn Farkas, deputy assistant secretary of defense under Obama, made the disclosure March 2 while on the air with MSNBC’s Mika Brzezinski.

“I was urging my former colleagues and, frankly speaking, the people on the Hill, it was more actually aimed at telling the Hill people, get as much information as you can, get as much intelligence as you can, before President Obama leaves the administration,” Farkas, who is now a senior fellow at the Atlantic Council, said.

“Because I had a fear that somehow that information would disappear with the senior [Obama] people who left, so it would be hidden away in the bureaucracy … that the Trump folks – if they found out how we knew what we knew about their … the Trump staff dealing with Russians – that they would try to compromise those sources and methods, meaning we no longer have access to that intelligence.”

A couple more things. Trump did not say he was wiretapped. He said he had his “wires tapped.” Very different things. “Wiretapping” obviously means surveillance of any kind and it is clear that Trump and his team were surveilled. The order to either wiretap or surveil the Trump team does not come from the President. The President cannot order this. The order has to come from the DOJ- most likely the Attorney General.

To suggest that any of this could transpire without the knowledge of the President is not credible. Allowing the identity of Americans who normally remain masked to be widely circulated to virtually guarantee it being leaked is a baldly political action.

obama knew since 2015 that the Russians were making an effort to “hack” the election, as it were, but he did nothing and said nothing. The NY Times would have you believe it was because obama was “loathe” to interfere in the election- as if he was ever loathe to interfere in elections ( see Israel and Brexit). It’s bullsh*t. obama chose not to say anything as he fully believed hillary’s electoral triumph was a fait accompli.

It is difficult to accept that there is any real merit to the Trump-Russia allegations. Had there been anything, obama would already have engineered a leak of anything substantial. As it is, he has only created confusion by leaking Flynn’s communications with Kislyak- and muddying the waters may well have been the goal. Flynn’s transgression was being dishonest about his exchanges with the Russian Ambassador. Contacting Kislyak was no crime. obama himself undercut the current Bush by negotiating with Iran prior to his be becoming President. In return, Iran supported obama in the 2008 election.

Where was the outrage? Where were the demands for investigations?