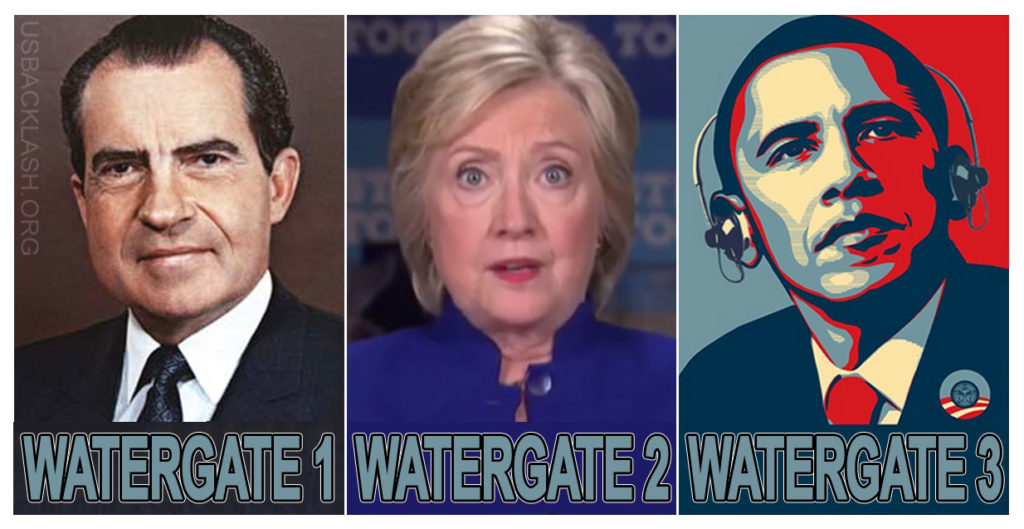 What is even more appalling than the illegal wiretapping that, if not done by Obama, was directed by him to the NSC and FBI is the fact top Republicans and Democrats knew about this surveillance and said nothing. Among those who knew and said nothing was House Speaker Paul Ryan, House minority leader Chuckie Shumer, and Senator John McCain and Senator Lindsay Graham.

In concert with the media it is being claimed that there is no proof that the wiretapping actually occurred. These are the same low lifes that are pushing a false narrative about Trumps Russian connections, even though the FBI has already stated there is no proof. Obama, in refuting this accusation claims that his administration ever ordered the wiretapping or interfered in any investigation being done by the DOJ. He is saying that he did not order it, but does not say that the administration did. This isn’t like the “Russian problem”, this accusation actually has documentation that shows what was done although the MSM will bury it and not let the American people know. It is a concerted effort by all those involved to hide the truth and ignoring the fundamental freedom of the American people to know what traitors to this country are doing.

There were multiple attempts by the FBI to obtain a warrant through the Foreign Intelligence Surveillance Court, (FISA) over the summer to monitor four member of the Trump campaign because of what they felt was inappropriate contact between these men and Russian officials. This original attempt to gain a warrant was turned down. Another FBI request was accept by the FISA court in October of last year. The accepted warrant was centered around the possible financial and banking offenses that were allegedly found on a server that was possibly related to the Trump campaign. In essence, the Obama administration was monitoring the Trump campaign using the power of the federal governments intelligence services paid for by taxpayers.

The second FISA request, once again done by the FBI on Obamas orders led to the wiretapping of Trump. In the request it clearly states,

“No evidence was found- but the wiretaps continue”

The media, both local and national have already tried to make this story disappear while continuing to push a false “The Russians did it” storyline to do all they can to delegitimize our President. The concluded investigation into the Russians subverting our election has already be made known to the media and everyone in both parties, but the Democrats and the sycophants in the media can’t let go because they don’t have anything else and they are still hoping that the low information voters who barely watch much less comprehend local news will continue to believe it. Stories such as the Russian meddling in our elections has already been refuted, but sycophants such as the New York Times, the Washington Post and the progressive/socialist on the Democrat party refuse to let it go. They have nothing else, no policy, not way forward to bring the American people  back to the Utopia that these Marxists and globalists have laid out for the country.

Couple Obamas changing of the rules to allow the NSA to share “evidence” with all other intelligence agencies just before leaving office, and it shows that Obama holdouts in intelligence can put out any false story they want, label it intelligence and not have to divulge where the “information” came from, putting even private citizens under the yoke of Obama infiltrated intelligence agencies.

They used this intel to take down Flynn by making it the lead story for weeks, and intended to do the same to Sessions until it came out that one of the meeting that everyone has been whining about was actually an event arranged by the the Obama administration. And Sessions did answer the question that Franken asked, he did not talk to any Russians about the campaign. The question now is, did the intelligence agencies set up the question to try and catch Sessions in a lie and force Trump to terminate him?

The FISA court has a very rigid set of rules that must be followed. The only valid reason for the court to approve surveillance is only foreign intelligence information is the information necessary to protect the United States against a potential or actual hostile attack, sabotage or international terror. It would be interesting to see which of these the MSM will pick to attempt to convince the American People that there was nothing criminal here.

Looking at the FISA court and why the warrant was ever issued in a challenge for the past administration, the courts, and is just another reason why the American people do not trust government. FISA should have had no part in this debacle as there was no relevant purpose to even issue the warrant, especially when based on the Obama administration withholding information that the court needed to make a determination. An affidavit was required by the FISA court to apply for the warrant. That affidavit was written and attested to by the Obama administration. If that affidavit concealed information from the court, which it apparently did, that affidavit must be made available to the Congress and the American people. It has been proven that although the main target was Donald Trump, his name in never mentioned in the warrant that FISA allowed. That is perjury and a serious violation, along with the dissemination of information on an American citizen from an investigation that in all instances should remain confidential.

It can’t be denied that the Obama administration used surveillance information and sent it to the mainstream media in leaks that are prosecutable. The investigation into this illegal process will continue. The American people will no longer turn a blind eye to the socialists, globalists and media that continue to feel we must follow what they feel is best for us. Obama and the members of his administration need to go to jail, Those Obama holdovers in this administration need to be gone, and those reporters who willingly spout lies and fake news need to find that the American people will no longer follow and will in the long term run them out of town on a rail as it should be.

Login
wpDiscuz
65
0
Would love your thoughts, please comment.x
()
x
| Reply
‹ Back to Categories