From where I sit, it looks as though the Russians own the democrat party 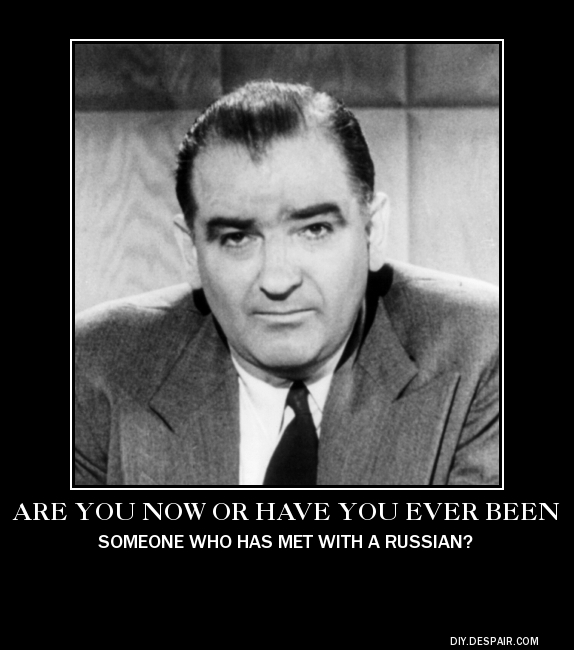 The invective being heaped on Jeff Sessions by democrats is astounding. Democrats are spitting out words like “perjury” and “treason” as part of their plan to cripple the Trump administration.  Recusal not being enough, Pelosi called for Sessions to resign.

For the record, Jeff Sessions did not commit perjury.

The criminal law only prohibits lying to Congress under two statutes — 18 USC 1621 ands 18 USC 1001. Section 1621 requires a person “willfully and contrary” to a sworn oath “subscribe a material matter” which is both false and the person knows to be false. Section 1001 is basically the same, without certain tribunal prerequisites: it also requires the government prove a person willfully made a materially false statement. This requires three elements: first, a false statement; second, the false statement be “material”; and third, the false statement be made “knowingly” and “willfully.” A statement is not false if it can be interpreted in an innocent manner. A statement is not material if it is not particularly relevant to the subject of the inquiry. Willfully is a very high standard of proof: it requires the person know they are committing the crime, and do so anyway. None of the three exist as to Sessions.

Sessions did not lie. Period. Al Franken did not ask the simple question- “Did you discuss the Trump campaign in your meetings with the Russians over the last year?”  Instead, he asked an intentionally ambiguous question which made an answer complicated so that the response could be used a weapon to later bludgeon Sessions.

It’s not the first time Franken has made an ass of himself. Far from it. 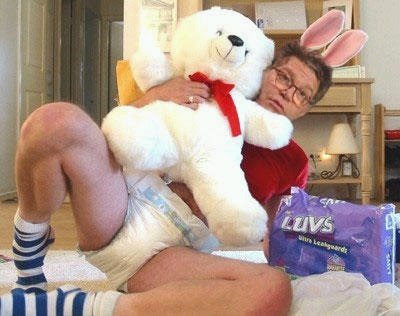 Now, note the title to this interview:

“Attorney General under fire over Russia meetings”  Hmm It’s time to examine Newton’s Third Law of Politics: for every action, there is at least an equal and opposite reaction. If one is come under fire for Russia meetings….then let’s bring the fire.

Dianne Feinstein is thick with the Russians 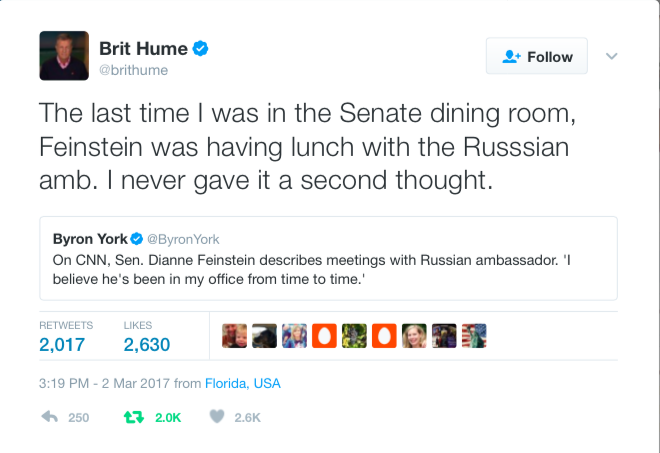 Barack Obama met with his Russian handlers at least 22 times in the White House.

Sen. Clarie McCaskill flat out lied about meeting with the Russians.

Hillary Clinton is up to her server with the Russians. Even HuffPoo asserts that the Russians hold a sword of Damocles over the Clinton’s.

From where I sit, it appears that the democrat party is a wholly owned subsidiary of the Russian state.

About that lying to Congress thing- Sessions did not lie. Then again, lying has been a cottage industry for democrats over the last eight years.

Eric Holder made a career of lying to Congress.

Both CIA Director Brennan and DNI Clapper lied to Congress.

IRS Chief Koskinen would lie about a sunny day.

And then we have that famous meeting between Bill Clinton and Loretta Lynch in which they agreed to quash the Hillary indictment.

You’d be hard pressed to find a fib-free democrat. So whose resignation did Pelosi demand? Which democrat perjury did she complain about? Which lie?

One is tempted to ask “Have you no decency, Ma’am?”, but the problem is she, as all democrats, have neither shame nor memory.

Without any doubt this character assassination is the brain child of barack obama. obama’s administration has been leaking information with a most convenient timeline. It is said that what goes around comes around. As obama plots open warfare on Trump, I think it’s time for some coming around. And then some.

LOL. They’ll get the same prosecutor that obama appointed.