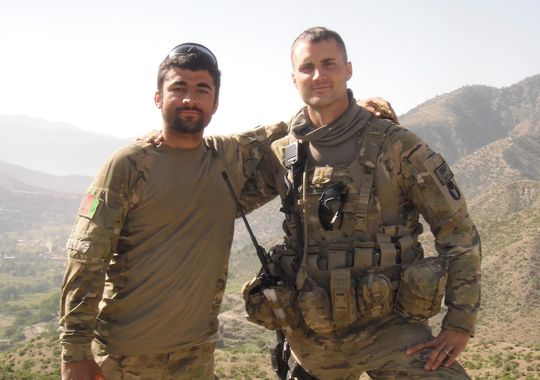 Iraqi interpreter Laith al-Haydar received multiple death threats for working with the American military at the height of the war in his country. In return for helping the U.S., he and tens of thousands of other Iraqis were promised U.S. immigration visas.

Nearly four years after he applied, the 41-year-old father of two is still waiting for a visa—and now faces a new setback: President Donald Trump signed an executive order suspending immigration from several countries with a Muslim majority, including Iraq, and a temporary ban on all refugees.

Mr. Haydar is among roughly 58,000 Iraqi applicants for U.S. immigrant visas and refugee resettlement under federal programs that promised to fast-track entry for Iraqis who worked with the U.S. government and other institutions deemed critical to the U.S.-led effort in Iraq, according to the State Department. A similar program for Afghans who’ve worked with the U.S. government may also be at risk.

At least one Iraqi and two Afghans who worked with the U.S. government and also qualify for expedited immigration visas were turned away from American ports of entry on Friday and Saturday, a State Department official said, adding that several more were prevented from boarding planes to the U.S.

Critics of the visa ban say it abandons of thousands of valuable allies abroad and risks deterring such people from working with the U.S. in the future, at a time when Mr. Trump is promising a more aggressive military posture abroad.

“These guys laid their lives on the line alongside American soldiers and got paid a fraction of what I made,” said Jake Thomas, a U.S. Army veteran who worked with Mr. Haydar in Iraq and now lives in Georgia. “If they want out, we need to honor our promises and get them out.”

Some American citizens are undeserving of their citizenship. There are non-Americans out there who have shown greater patriotism and have done more on behalf of our country than American citizens.

It is shameful that we have not shown more gratitude and loyalty to interpreters who have risked their lives in siding with us. And who we are basically abandoning. In future conflicts like Iraq and Afghanistan, where is the incentive to help American troops when you know the American government to be a paper tiger? That the American people do not have the stomach to take the losses and sacrifices necessary to win wars? And then America abandons its allies in the region to their fate, for siding with the Paper Tiger?

Saif Ali quit his job in Baghdad and sold his home and car after his family received their visas to resettle in the United States last month. They were due to fly on Monday.

The 35-year-old had applied for resettlement with his wife and three children in 2013 under the special immigrant visa program — for Iraqis who risked their lives working on behalf of the American troops or the U.S. government in Iraq.

But Ali was one of countless people around the world whose lives were thrown into uncertainty this weekend by President Trump’s executive order banning refugees, migrants and others from seven predominantly Muslim countries from entering the United States.

Just two days before their scheduled departure, Ali received a phone call to tell him that because of Trump’s new immigration rules, their application had been suspended.

“This is a tragedy,” he said. “It’s like someone’s stabbed me in the heart with a dagger.”

Ali had been employed as an IT administrator with a company working on projects for the U.S. Agency for International Development between 2010 and 2013. In the years following the U.S. invasion in 2003, Iraqis who worked with Americans faced death threats, kidnappings and assassinations.

“We were considered traitors,” he said. His recommendation letter from his employer said Ali had continued his “dedicated work” despite “sacrifice of his personal safety.”

It took three years of vetting before the family received their visas.

“I was so happy, we had our minds set on our new lives in America,” he said. “I imagined I could live a peaceful life, I could further my ambitions there, my kids would live in peace.”

His brother, who lives in Arizona, had rented a property for the family to live in. Ali paid $8,000 up front for rent and a deposit, money he cannot get back. His brother had also spent $3,500 on furniture so the house would be ready for Ali’s family when they arrived.

The Iraqi Heroes Left Behind By Trump’s Immigration Ban

“I know for a fact SIV [Special Immigrant Visa] applicants sold their houses and cars and lost their jobs in Iraq in order to travel to the U.S.” said Abdullah*, who began working as an interpreter for the U.S. Army in 2003. “Banning them from entering is a big mistake because they will have to start from zero and they don’t know how long they will live like this.”
All of these interpreters had been granted approval to enter the U.S. through the SIV process, a special visa designed for those who aided the American military. It involves perhaps the most rigorous vetting for entry to the United States: applicants must receive letters of recommendations from their American supervisors; every major U.S. intelligence agency is required to approve the visa; and most applicants are even subjected to a polygraph test.
“Talking about extreme vetting, it doesn’t get any [more] extreme,” noted Ali*, an Iraqi who worked as an engineer and translator for the U.S. government. He was personally threatened by terrorists for his work and had to go into hiding.
Ali received a recommendation from a three-star Army General, a retired Navy captain, a Navy commander and an Air Force major. He was vetted thoroughly by intelligence agencies. After nearly three years, he was issued his visa just three days ago.
But then the Trump presidential order was signed, which prohibits him from enter the United States for 90 days—and by the time this period is up, his visa may no longer be valid.
“Don’t get me wrong, I am all up for keeping America safe. But banning Iraqis who were employed by the U.S. in Iraq, those who risked their lives by helping the coalition forces, doesn’t seem the proper measure,” Ali told The Daily Beast. “I don’t recall a single terror incident inside the U.S. in which an Iraqi citizen was part of. On the other hand, many of those terror attacks on U.S. soil were carried out by nationals of other countries which are not on the ban list. This is absolutely unfair.”

Some individuals have worked with more U.S. military units than the average Iraq War veteran. Yasin* worked with the 1st Cavalry Division, the 101st Airborne Division, the 25th Infantry Division, the 1st Infantry Division and the Oregon National Guard. Over years of service, he has seen eight IEDs go off within range of his convoy. He is threatened constantly by militias.
It took nearly five years for Yasin to get an SIV visa. He had finally decided to go live in a small town in Texas, where he was scheduled to fly in just over a week. Now, there’s just uncertainty, after already so much waiting.
“I am afraid they [will] call me and say that my flight is canceled,” Yasin said.
The organization No One Left Behind is dedicated to helping foreign interpreters who supported the American military but are now in personal jeopardy, and are trying to immigrate to the United States through a Special Immigrant Visa.
The demand for help from No One Left Behind has gone through the roof since Friday afternoon.
In the first 24 hours since Trump signed the order, they have received some 250 messages from SIV applicants who have not yet made it to America.
Jason Gorey, the COO of the group, is a veteran of the wars in Iraq and Afghanistan who volunteered for the Trump Inaugural Committee and assisted the Trump transition team—certainly no knee-jerk opponent of the administration.
But the order Trump signed on Friday was too indiscriminate, he says, and need an exception for those who served alongside U.S. forces.
“They have earned and deserve our protection. They are being hunted by ISIS and the Taliban for their service to America, and even a short delay in the SIV program will undoubtedly result in deaths,” Gorey said. “America will be judged by how we treat and protect our interpreters and similar allies, and I am very concerned that my brothers and sisters who are involved in future conflicts will not be able to find interpreters willing to serve with and protect them if we do not fully support the SIV program.” 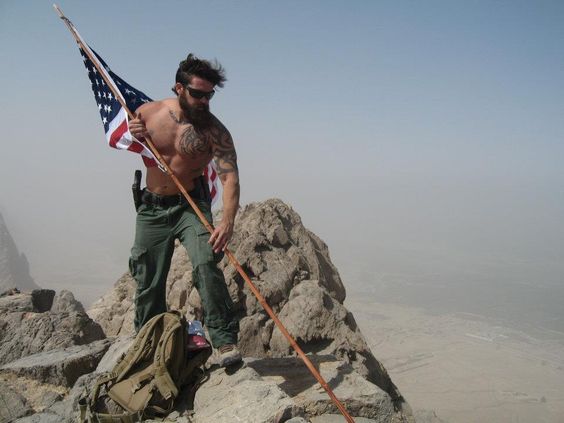 Iraqi Interpreter For U.S. Army Detained At JFK: ‘America Is The Land Of Freedom’

On Saturday, more than a dozen people were held at JFK under the order. One of them was Hameed Khalid Darweesh, a man who had worked as an interpreter for the U.S. Army’s 101st Airborne Division in Baghdad and Mosul starting shortly after the invasion of Iraq in 2003. He was separated from his wife and children for more than 19 hours while he was questioned.

Darweesh was eventually released, thanks in part to Rep. Jerry Nadler (D-N.Y.) and the International Refugee Assistance Project. Speaking to reporters outside the airport, Darweesh thanked the supporters and protesters who had shown up on his and other detainees’ behalf.

“I’m very, very thankful to all of the people who have come to support me,” he said. “Thank you very much. America is the land of freedom. I’m very thankful and very happy.”

A reporter shouted from the back: “What do you think of America?”

“America is the greatest nation,” he said. “The greatest people in the world.” 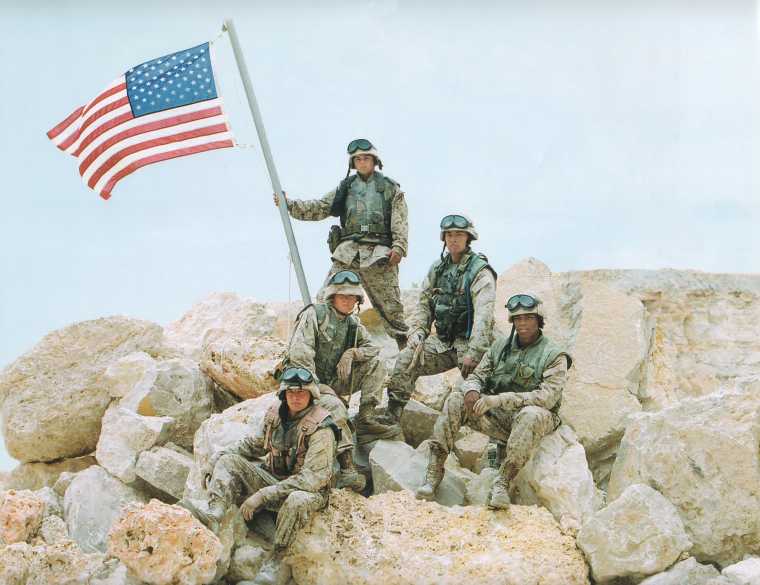