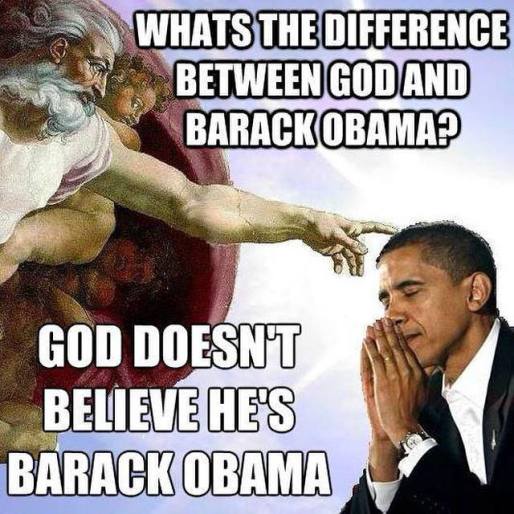 barack obama, the narcissist without limits, declared the other day that he could have won a third term as President.

“You know, I’m confident in this vision because I’m confident that if I – if I had run again and articulated it, I think I could’ve mobilized a majority of the American people to rally behind it,” Obama said in an interview with David Axelrod, his former senior adviser.

Never mind that he has largely destroyed the democrat party.

While Obama’s tireless campaigning, broad demographic appeal and message of “hope” and “change” helped propel him to two terms in the White House, his skills on the stump haven’t translated down the ballot.

The grand total: a net loss of 1,042 state and federal Democratic posts, including congressional and state legislative seats, governorships and the presidency.

obama confuses the American people agreeing with his “progressive vision of change” with his popularity for simply handing out goodies willy nilly, rewarding sloth and punishing individual achievement- the whole social justice warrior thing. Now normally upon leaving office Presidents do the respectful thing and leave town, allowing the new President to act.

obama is not leaving town. He’s rented a home in the Kalorama neighborhood in Washington DC. The cover story is that he rented the home so his daughter Sasha can finish high school (at the very tony Sidwell- shunning public schools that liberals tout so highly). Sasha must be very particular about where she does her homework- the house obama is renting boasts of 8,200 square feet of living space and sold for over $5 million 2 1/2 years ago.

obama made clear his intention to “weigh in” on issues:

He went on to say, “Now that doesn’t mean that if a year from now or year and a half from now or two years from now there is an issue of such a moment–such import that isn’t just a debate about a particular tax bill or a particular policy but it goes to some foundational issues about our democracy I might just weigh in. I’m still a citizen. And that carries with it duties and obligations.”

Because he’s such a great guy and is never wrong:

“I know that in conversations that I’ve had with people around the country, even some people who disagreed with me, they would say the vision, the direction that you point towards is the right one,” Obama said in the interview, which aired Monday.

This is the thing with barack obama. He says what he wants you to believe is true, no matter how detached from reality it is. The RCP average indicates that 32.1% say the country is on the right track under obama while 56.4% say we’re going in the wrong direction.

Back when he was sure hillary clinton would win the election, obama said

“I’m not on the ballot this fall. Michelle’s pretty happy about that, but make no mistake: These policies are on the ballot, every single one of them.”

And the people spoke.

Those “duties” obama spoke of apparently include grooming disruptors who would continue to steer the country toward a Leninist ideal:

He said part of his post-presidential strategy would be developing young Democratic leaders — including organizers, journalists and politicians — who could galvanize voters behind a progressive agenda. He won’t hesitate to weigh in on important political debates after he leaves office, he told Axelrod.

obama’s intimated that he would wait a year or two before publicly opining but he is is a liar of galactic proportions- whether on health care, Iran or red lines. You can bet that he will be injecting himself into the political conversation on a non-stop basis and there will be a purpose to it. It will be to disrupt the Trump administration. It will be to force his progessive utopia on America.

Ed Klein suggested that obama is setting up a shadow government. He might just be right.

Thought you were going to be rid of barack obama? Think again.

@RedTeam: Here.s some real news. I’m going out for dinner,dancing and champagne with my lovely wife and friends.

Happy New Year to ALL

@Bill- Deplorable Me: Sorry, Billy.
I love this country and not a bit pissed off by most of the things President Barak Obama has done.
Nor am I so insecure and consumed with hate that I call those who disagree with me “ignorant.”
That name calling is “deplorable” and the work of the antiChrist.

I love this country and not a bit pissed off by most of the things President Barak Obama has done.

Those two conditions are incompatible with each other.

@Bill… Deplorable Me: No they are not. Your inability to comprehend that speaks to your narrow, rather biased view.

No they are not. Your inability to comprehend that speaks to your narrow, rather biased view.

Actually Philip, it speaks to your inability to face reality.

Why should you worry? You’ve always claimed Obama has been totally ineffective at everything he has attempted. Perhaps you’re already anticipating the loss of your party’s unifying boogieman?

When the wheels fly off Trump’s tricycle, it won’t be because Obama loosened the axle nuts. You should have checked them before the Big Race. They weren’t screwed on tightly enough to begin with.

Why should you worry? You’ve always claimed Obama has been totally ineffective at everything he has attempted.

Yes, greggie, obama has been ineffective at being President of the United States, that much is true.

However, he has been quite effective a the intended destruction of said United States.

We’ll soon see. It’s only fair to note that the polls were all wrong about the outcome of the election. None projected Trump would win, yet he somehow did.

yet he somehow did.

The Russians did it greggie, remember?

It could not be possibly because the democrats nominated a flawed candidate. No, she would be the best pick ever for POTUS. Remeber, your savior, Obama, told us she was the most qualified candidate ever in the History of Presidential campaigns to seek the office.

I suppose you believed that too……

No they are not. Your inability to comprehend that speaks to your narrow, rather biased view.

Yes, they are. How can you love this county and not be embarrassed that Obama, almost single-handed, released ISIS on the world, stood aside while he falsely called them the “JV”. If you actually love this country, you would be upset that this President had excused racial violence and promoted it, defended riots and destruction of public property. You would, in fact, be nauseated over his choice of the Black Lives Matter hate group over the lives of innocent police protecting the public. If you loved this country, you would be upset that the economy has been dormant and lethargic while the most people in American history have been unable to find suitable jobs.

Yes, your remark makes absolutely no sense and is as compatible as oil and water.

Why should you worry? You’ve always claimed Obama has been totally ineffective at everything he has attempted.

True, but that was based upon the assumption that Obama has been trying to improve the US economy, society, national security and foreign policy. If one assumes Obama is intent on causing harm to the power and prestige of the United States, he is doing a wonderful job. Thus, if he is trying to create even greater problems for Trump than he already faces, he is being quite successful.

Many in U.S. Skeptical Trump Can Handle Presidential Duties

I am skeptical. I am skeptical there is ANY human being that can clean up all the messes and disasters Obama leaves behind. However, the choices in personnel Trump has made give me hope that this administration will be able to take on the task. Tillison, for instance, is highly respected around the world, as opposed to merely having an aura due to his name. He has tremendous potential to restore our prestige and credibility with other governments, particularly those Obama has screwed over.

It’s only fair to note that the polls were all wrong about the outcome of the election. None projected Trump would win, yet he somehow did.

Yes, somehow he did. Somehow, people finally became aware that the corrupt media was lying on a regular basis, the Democrats were playing their wards for fools and, contrary to the media description, the economy and national security was in a shambles. Somehow, enough people saw this to make a difference.

@Greg: #108 Reeeally cummon! No magic pen? We know he has a magic phone it bypasses the MSM.

Does anyone know why Obama had a new wall built around the house he’s moving into? Walls don’t work. Isn’t that the Libtards trademark? Incidentally, Clinton’s have one around their estate also.

@RedTeam: Could it be that it just LOOKS like a wall but, really, is a bridge?

Gee all these accusations sound just like Trump, the ultimate narcissist. You Republicans are never happy.