Instead of Chasing Fake Nazis in the GOP, Maybe the Democrats Should Root Out Their Own? 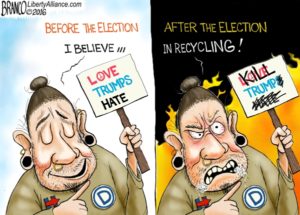 We now see what the Democratic Party’s play book is going to be with the Trump administration. There has been a meltdown over Trump’s appointment of Steve Bannon as his Chief Strategist and Legal Counsel. Apparently having an affiliation with a news source that the Radical Left doesn’t like is proof that you’re an Anti-Semite White Supremacist. But is he? First off, PJ Media’s David P. Goldman weigh in:

All the existential rage of the defeated and humiliated elites is now focused against Steve Bannon — the architect of Trump’s victory, the media genius who won the battle with less than a fifth of the financial resources at Hillary Clinton’s disposal.

I know Steve Bannon, and have had several long discussions with him about politics. Steve is fervently pro-Israel, and it is utterly ridiculous to suggest that he is anti-Semitic.

Other observant Jews who know Bannon — for example, Joel Pollak — attest to his support for Israel and his friendship for the Jewish people.

I have to admit that Breitbart’s web site is nowhere near what it was when Andrew was still alive. But anti-Semitic? More from Goldman:

Anyone can search the Breitbart Media archive for posts on Israel, Jews, and related topics, as I have, and determine that Steve Bannon’s hugely successful media platform is 100% pro-Israel.

Not only that: Breitbart consistently reports on the dangers of anti-Semitism around the world.

Not a single article appeared in Breitbart.com during the past two years that could not have appeared in Israel Hayom, the leading Israeli daily.

The key problem with Steve Bannon, Donald Trump’s newly named strategist, isn’t that he’s an anti-Semite. He may be, though the only piece of personal information suggesting anti-Semitic views come from a contentious divorce proceeding two decades ago—and such charges need to be viewed skeptically. Anti-Semites usually out themselves on a regular basis because they can’t help it. And the late Andrew Breitbart, who was his close friend as well as mine and a loyal if entirely nonpracticing Jew, would not have had a minute’s time for someone who spewed anti-Semitism in private.

And if you want an entertaining disembowelment of the anti-Bannon crowd, here is seventeen minutes of Joel Pollack destroying the flimsy arguments of a CNN panel. Of course, pointing out that Bannon isn’t a demon doesn’t mean he’s a saint, either. The answer is probably somewhere in the middle, and if you want a critical look at Bannon and the Alt-right, check this video from Ben Shapiro. For anyone unfamiliar, he’s probably one of the most prominent #NeverTrumpers from the conservative side. Start watching around the 8:30 mark, and while Shapiro isn’t praising Bannon, even this heavy Trump critic isn’t condemning him, either.

But if we’re worried about Nazis influencing the government, how about who’s paying for all of these out of town buses full of violent agitators to start rioting? Because healing and accepting election outcomes.

Of course, these groups are getting money from every Democrats’ favorite Nazi, George Soros. Nazi, you say? Yes. As nobody on the Left seems to realize, the billionaire who sends money to so many of their noble causes started his business career as a Nazi collaborator.

And of course, Soros is now meeting with top Democrats to plan the resistance against a legally elected president. I’m not going to throw down the naive horror and dismay that we saw from the Radical Left eight years ago over the notion that an opposition party might actually… oppose the president. But for all of the fake indignation from eight years ago over opposing a new president, maybe Democrats should look at who’s sending their marching orders.

Quit busing bus loads of hooligans,anarcists and brownshirts to disrupt the ingauration in January 20 2017

I’m booked on my bus, fuckers.

The left had so much success this election with offering nothing but accusations of racism they have decided to make it their one and only trick.

@Reem: Who bought your ticket?

No World Community,No North American(Soviet)Union,No NWO,No More United Nations,No One World Goverment bring our military home and let those UN War Mongers solves their own problems we just off them aid if their have a Natural Disaster

@Reem: Since your party lost all controlling interest in the Government (Clean sweep, GOP), what else can you do but pout?

I read the site organizing the Jan 20th protest.
They express hatred, not only for all Republicans (Tea Party, Trump supporters AND GOPe) but they ALSO hate Democrats!
So, who will be their protesters?
Anarchists (what? fewer than 0.01% of America’s population.)
Commies (what? also very few, but count Obama in)
Greenies (way fewer than the commies.)
A few of those bored, out-of-work, basement dwelling apolitical thugs.
A few guys hoping to meet loose women.
Dems too dumb to realize the organizers hate all things Dem.

Reem, which category are you in?

@Reem:
What happened to love trumps hate? Looks like you’ll be in a bus full of intolerant haters. Will you be right at home there?

[…] blog of the day is Flopping Aces, with a post on Dems needing to root out their own […]

One of the biggest Donors to the DNC has been George Soros a Nazi and proud of it, now wanted in Russia for trying to collapse their economy like he messed with the British pound.
It was the minorities that elected Trump like it or not, there just aint enough angry old white dudes to have pulled this off, as if all old white guys are Nazis.
I think its wonderful REEM is going to the Jan 20 celebration to honor our new president, who would have thought. Say hi to all the Bikers4Trump for me.
http://www.thedailybeast.com/articles/2016/04/02/bully-of-week-trump-s-bikers.html

@Nathan Blue: They need to bury their dead, the Democrat party was sold out by its leaders, they chose the least likely candidate on the planet, Bernie got a nice lake home valued at about 600k, for his cooperation. No matter how they cheated and broke the law they still lost, now they want to amend the constitution and eliminate the electoral college, to eliminate it is allowing FL CA and NY choose our President. but getting 2/3rds required for a constitutional amendment is a liberal dream it wont happen.
Rather than scream their pointless frustration at whom ever they wish to blame for utter failure maybe they should clean out the DNC elites and get a real candidate for 2020.