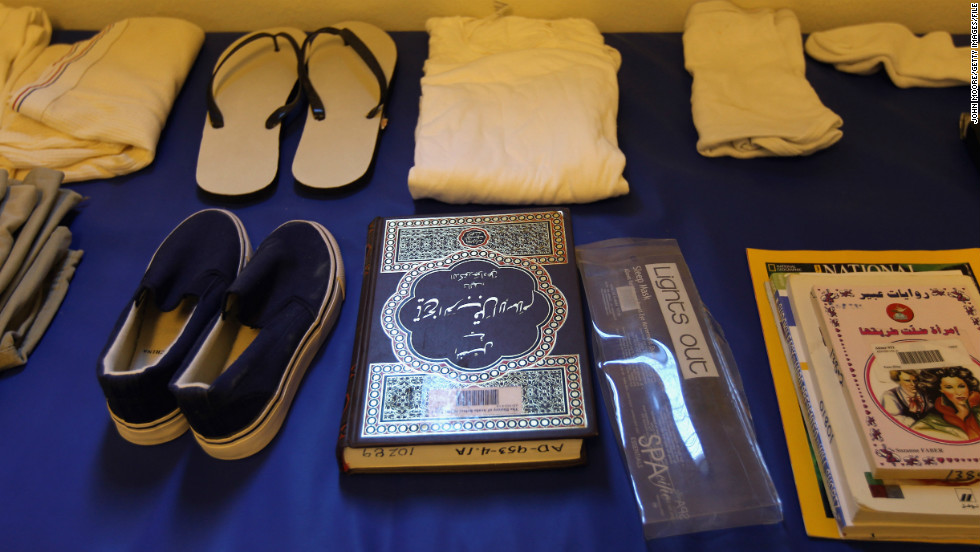 Zubaydah, characterized as “the poster child” and “guinea pig” for the CIA Interrogation Program, made his first public appearance on Tuesday before a GITMO parole board:

The hearing is part of the Periodic Review Board, which the Department of Defense describes as “an interagency process designed to review whether continued detention of Guantanamo detainees is necessary to protect against a continuing significant threat to the security of the United States.”
“He has come to believe that he might have a chance to leave Guantanamo through this process,” a representative for Zubaydah said at the hearing.

Zubaydah did not speak during the public portion of the review board, but his representative said, “He has no desire or intent to harm the United States or any other country, and he has repeatedly said that the Islamic State is out of control and has gone too far.”

ABC News is typical of most media accounts:

Mistakenly believed to have been one of the top officials in al-Qaeda, Zubaydah, 45, whose real name is Zayn al-Ibidin Muhammed Husay, was waterboarded 83 times and endured several other enhanced interrogation techniques used by the CIA in its secret detention program. It was later determined that U.S. intelligence overstated Zubaydah’s role in al-Qaeda.

Zubaydah, who thanked his interrogators for it, was not waterboarded 83 times. Yet this distorted claim to this day, is parroted throughout media.

And so it goes. One media report after another, perpetuating the idea that Zubaydah was waterboarded 83 times; that he was either anywhere from a low-level operative to not a terrorist at all; but another GITMO innocent whose supposed Constitutional rights we’ve been violating by not charging him and giving him a trial. Or dismissing him altogether because he was “mistakenly” characterized at one point as a “number 3 man” in al Qaeda; or that since he was not “officially” al Qaeda, we wrongfully captured, rendered, and interrogated him. (Note: KSM was also not “officially” al Qaeda at the time of the 9/11 attacks, which he masterminded. He did not swear bayat until after he felt assured that the plots would be carried out. And according to Seth Jones’ Hunting in the Shadows, Zubaydah made an initial request to join al Qaeda in 1993; and was rejected).

Excerpt back in 2009 from Ron Kessler’s book, The Terrorist Watch (The citation from his book is a bit extensive and so I sought and received permission from the author):

Zubaydah is believed to have been born to Palestinian parents in Saudi Arabia. He had strong connections with Jordanian and Palestinian groups and was sentenced to death in absentia by a Jordanian court for his role in a thwarted plot to bomb hotels there during millennium celebrations. Officials believe he was also connected to a plan to blow up the U.S. embassy in Sarajevo and a plot to attack the American embassy in Paris.

Zubaydah had run a terrorist camp in Afghanistan where some of the 9/11 hijackers trained. He was, says an FBI official, like a U.S. Army recruiting station for al Qaeda. He was based in Pakistan near the border, and people who were looking to join the jihad would come through Zubaydah and he would assess them: Are they reliable? Do they come from trustworthy people? Does somebody vouch for them? Are they infiltrators?

Once he was done with his vetting process, he would decide where they should go- to a camp for making bombs, to a camp for combat training.

“We talk about him in terms of being a high-ranking al Qaeda operative,” says an FBI official. “It’s not so much that he was high-ranking as that he had access to all of the most high-ranking people, because he was a funnel through which people came.”

There are competing narratives regarding information obtained from Zubaydah- whether before or after EITs were applied. Marc Thiessen and Jose Rodriguez in their respective books challenge the version pushed forth by the media, in large measure due to efforts of Ali Soufan (whose book, Black Banners, is also worth reading).

Marc Thiessen, author of Courting Disaster, the first “insider” defense of the CIA interrogation program in 2009, thoroughly covers the media mythcharacterizations and distortions regarding Zubaydah:

Inevitably, the news reports of his hearing dredged up all of the old falsehoods often peddled in the media about Zubaydah. So for the slow learners in the press, here is a rundown of the top three myths regarding his capture and detainment.

It’s a good read; with Thiessen linking also to Tom Joscelyn over at the Long War Journal.