We haven’t had a good series on the Chickenhawks of the Radical Left in a while. You might remember some of the previous ones – paternity leave, minimum wage,and of course, my first chickenhawk post from three years ago, also about green chickenhawks! But now let’s return to the chickenhawks of the Church of Climate Change. Where a few years ago I asked why they don’t invest more of their own money in green technology, let’s look at it from a simpler angle of how they live their everyday lives. A few months ago a few of this strange cults’ higher elected clergy published an opinion piece in The Nation, offering what is basically a grand plan on how to destroy the US economy. You can click through through to read the entire bill, but in the article they summed up their “plan”:

Last Monday, the Congressional Progressive Caucus (CPC) introduced an ambitious climate-change resolution calling for goals of near-zero emissions by 2050, 50 percent renewable electricity by 2030, and 100 percent clean and renewable energy by 2050. The resolution covers everything from emission goals to job programs for American workers. It also seeks to unify activists, organizations, the scientific community, and elected officials around our common survival.

As you might imagine, the bill itself is a pretty entertaining read, touching on nearly every per cause of The Radical Left. Naturally, they give us generalities of how we’re going to completely change the way we live and by what year, but nothing about how one implements these changes, the cost, or which specific steps need to be taken and how success or failure are measured. As Mike Lee recently lamented in an interview,

“Instead of passing a law explaining how we’re going to clean up the air, they pass a law saying ‘we will have clean air,'” Lee said.

Patrick Richardson at PJ Media gives a bit of insight as to why such mandates are unrealistic and little more than political posturing and power grabs:

Nearly everything we wear, eat, or use has fossil fuels in the supply chain somewhere. Even the carpets most of us walk on are made of synthetic fibers. To most of the environmental left, food magically appears in the grocery store,; iPhones and other modern conveniences are conjured by Technology Gnomes in the middle of the night, rather than having been manufactured using toxic processes.

And in practice these mandates aren’t working out too well, like with South Australia’s $14,000 Mwh cost for renewable energy:

The South Australian Government been forced to beg fossil fuel operators to bring mothballed plants back online, to contain wild swings in electricity spot price caused by unstable renewable production, prices which last month peaked at $14,000 / MWh – up from more normal prices of $100 / MWh which prevailed before political favouritism towards renewables messed up the market.

If I were the owner of one of those mothballed power plants my response would be simple, “EMBARGO ON!” 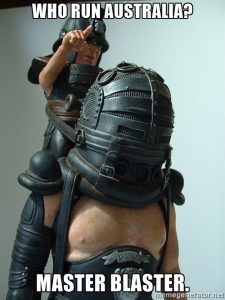 And one of the hazards of blogging that I’ve lamented before is that you can get a great idea and somebody smarter than you writes about it before you get a chance to write your post. That’s exactly what Glenn Reynolds did this week in an op-ed in USA Today, and he lays his own challenge to these Fossil Fuel Chickenhawks:

Likewise, it’s hard to expect Americans to accept changes to their own lifestyles when the very people who are telling them that it’s a crisis aren’t acting like it’s a crisis. So I have a few suggestions to help bring home the importance of reduced carbon footprints at home and abroad:

Extend Smith’s bill to cover the entire federal government. We have Skype now, and Facetime. There’s no reason to fly to meetings. I’d let the President keep Air Force One for official travel, but subject to a requirement that absolutely no campaign activity or fundraisers take place on any trips in which the president travels officially.

Obama makes a great point about setting the thermostat at 72 degrees. We should ban air conditioning in federal buildings. We won two world wars without air conditioning our federal employees. Nothing in their performance over the last 50 or 60 years suggests that A/C has improved things. Besides, The Washington Post informs us that A/C is sexist, and that Europeans think it’s stupid.

What is interesting is that Climate Religion is starting to fray the coalition. A few of them actually believe what they’re saying, which means assaulting a sacred cow of The Radical Left and going nuclear. Literally:

According to Oreskes, suggesting that nuclear power play some role in limiting carbon emissions and solving global warming is not just wrong but “a strange form of denial that has appeared on the landscape of late, one that says renewable sources can’t meet our energy needs.”

It is one thing to wonder about the value of nuclear energy—I was mostly opposed, too, until I saw Robert Stone’s compelling documentary, “Pandora’s Promise.’’ But to label Hansen . . . or Caldeira as denialists is absurd. . .

Oreskes is certain that we won’t need nuclear power to reduce greenhouse-gas emissions. This is a legitimate and essential debate. But it should be possible to have it without denigrating positions held by people who have spent their careers, quite courageously, trying to solve the world’s biggest problem. . . 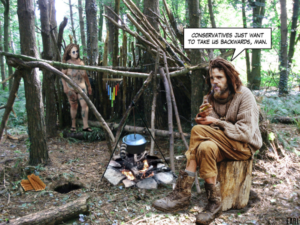 Image appears via The Earl of Taint

Heh – it’s always fun to see Lefties whine when they get treated how Conservatives are always treated by the Radical Leftist brood. Luckily, here in America we’re smart enough to learn from the mistakes of Australia, right?

The U.S. and Canada are responsible to a great degree for causing the Earth’s temperature to rise and spurring climate change, President Obama said Thursday.

“In some ways, as wealthier countries, we can probably adapt and manage better,” Obama said in a joint press conference with Canadian Prime Minister Justin Trudeau. “On the other hand, we’re also those responsible for a lot of the carbon pollution that is causing climate change.”

“The Ontario government will spend more than $7-billion over four years on a sweeping climate change plan that will affect every aspect of life – from what people drive to how they heat their homes and workplaces – in a bid to slash the province’s carbon footprint.

Ontario will begin phasing out natural gas for heating, provide incentives to retrofit buildings and give rebates to drivers who buy electric vehicles. It will also require that gasoline sold in the province contain less carbon, bring in building code rules requiring all new homes by 2030 to be heated with electricity or geothermal systems, and set a target for 12 per cent of all new vehicle sales to be electric by 2025.”