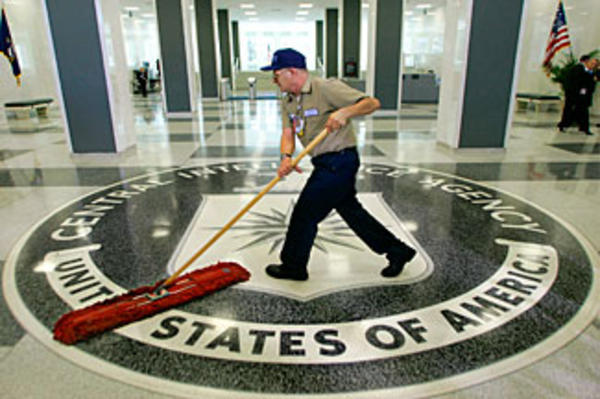 How does Brennan defend CIA interrogation program while not advocating for a return to those glorious 2002-3 yesteryears of CIA swim lessons? There is no contradiction here:

Brennan on Wednesday defended the use of the Bush-era techniques, which had thrust his agency into one of its greatest periods of tumult in recent memory.

“The agencies’ detention and interrogation program, I believe, was instrumental in keeping this country safe in the aftermath of 9/11,” he said. “There were individuals that were subjected to these [enhanced interrogation techniques] that subsequent to that provided information that was in fact credible and worthwhile for pursuit.”

In the past, Brennan’s support for the past use of enhanced interrogations has become a source of criticism from ardent opponents of the practice. Brennan had expressed his personal opposition to some of the practices while they were occurring, he said during his Senate confirmation hearings, but he was in another part of the agency and did not attempt to stop them.

But the reputational damage to the CIA and the U.S. was too great to allow it to return, Brennan maintained.

“I know that there has been calls for waterboarding or worse or whatever else,” Brennan said, in an apparent direct response to Trump. “As long as I’m the director of CIA, we are not going to go down that road again.”

How does Brennan defend EITs and claim there were successes within the program, in the past? And yet reject waterboarding making a “comeback”? Easy. It’s for similar reasons to how former director Michael Hayden has defended the CIA RDI program while criticizing Trump’s trumpet call to bring it back in vogue “and far worse”. Trump doesn’t get how the CIA interrogation program worked (and neither do the critics for that matter, with the highly partisan Feinstein Report only muddying the narrative even more).

This is for new FA readers since regular readers are tired of my droning on the topic:

Only 3 HVD were ever waterboarded. KSM was the last one in 2003. No one has been waterboarded since. It basically ended on Bush’s watch, not Obama’s. When WaPo broke the news about black sites and waterboarding rumors, it essentially killed the technique as an interrogation tool because part of its effectiveness was in the “not knowing”. Some of the 119 HVD under CIA custody (33 or 39 of them received EITs- the others did not) had interrogation resistance training and knew how to defeat conventional interrogation techniques. In 2001-3, we knew very little about al Qaeda. By 2006, over half of what we came to understand about al Qaeda- its financing, courier system, operatives, training, etc.- was thanks to the CIA program.

When Michael Hayden came aboard in 2006, he revamped the suspended program and took waterboarding off the menu. Since then, we’ve also had the 2005 DTA, 2006 MCA, and the 2015-2016 NDAA with an amendment that restricts all government agencies to abide by the Army FM. All of these things make it extremely unlikely for waterboarding to make a return. Its use was never even widespread (again only 3 HVD- al-Nishiri, Zubaydah, and KSM).

People also misunderstand the whole purpose of EITs and how they figured into the CIA interrogation program. They weren’t used to commit “torture”; nor for the sake of extracting confessions or information. So the parroted empty-headed line about “torture doesn’t work because they’ll tell you whatever you want to hear” is a strawman and a misunderstanding of how EITs worked.

The presumptive Republican presidential nominee has described the tactics as torture, but insisted that they are necessary to defeat ISIS.

A number of Americans aren’t opposed to a certain amount of “torture”, if it saves American lives. They may even be willing to take it pretty far; for is it immoral if engaging in “real” torture (pulling out finger nails, drilling holes, etc.) of someone like the mastermind of 9/11 and 3,000 deaths of innocent civilians, helps prevent another 9/11 and the deaths of 3,000 innocent lives? What is the lives of not only your fellow citizens but your flesh and blood worth to you? How far would you go?

But this isn’t what the Bush administration and the CIA it directed, advocated for. Bush didn’t want to torture. Tenet denies that the CIA tortures. They sought the red line in the sand to insure that they did not cross that boundary because they didn’t believe in torture. They believed in maintaining a higher ground while seeking tougher interrogation techniques for hardened jihadis who had no respect for human life, including their own, at a time when our agencies knew very little about al Qaeda. As time wore on from those early days following 9/11, EITs were employed even less frequently than the infrequency with which they were originally used. But most of the 13 techniques weren’t announced to be “off the menu” until President Obama came into office.

Yep. And Vladimir Putin is a former Eagle Scout who sent you...