Memorial Day- Solemn, Happy, or Both? 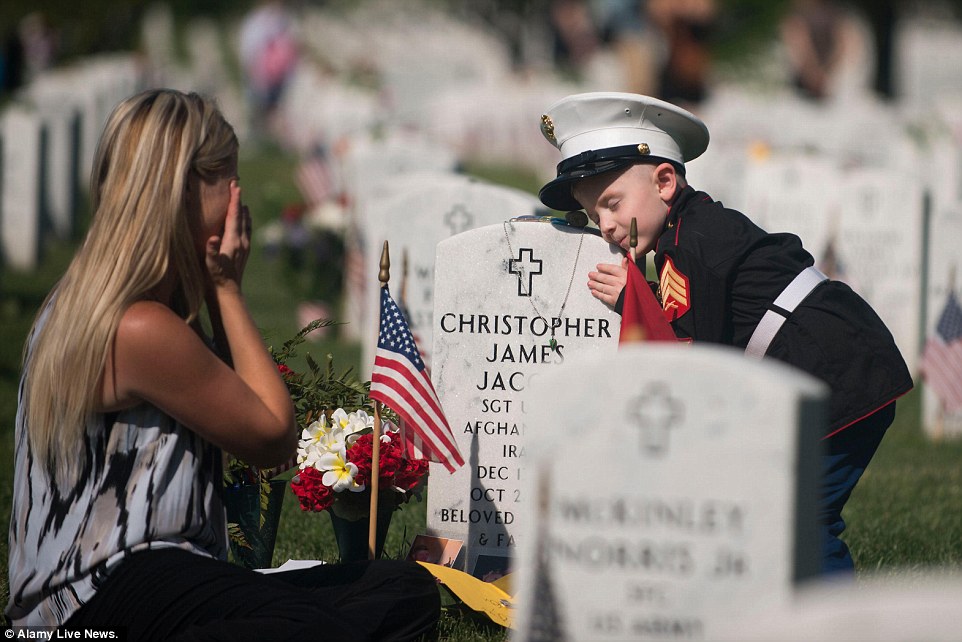 A friend recently posted this iconic 2007 photo of Christian Golczynski: 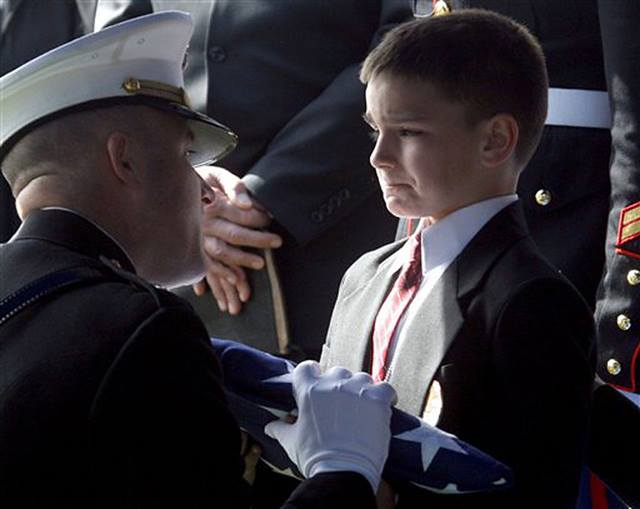 His father, Marine Staff Sgt. Marc Golczynski, was shot and killed while on patrol during his second tour in Iraq. This photo is all over the internet and is heartbreaking because of the 8 year old’s strength in holding back tears during a formal ceremony honoring his father who is no longer with him.

This is Christian a year ago: 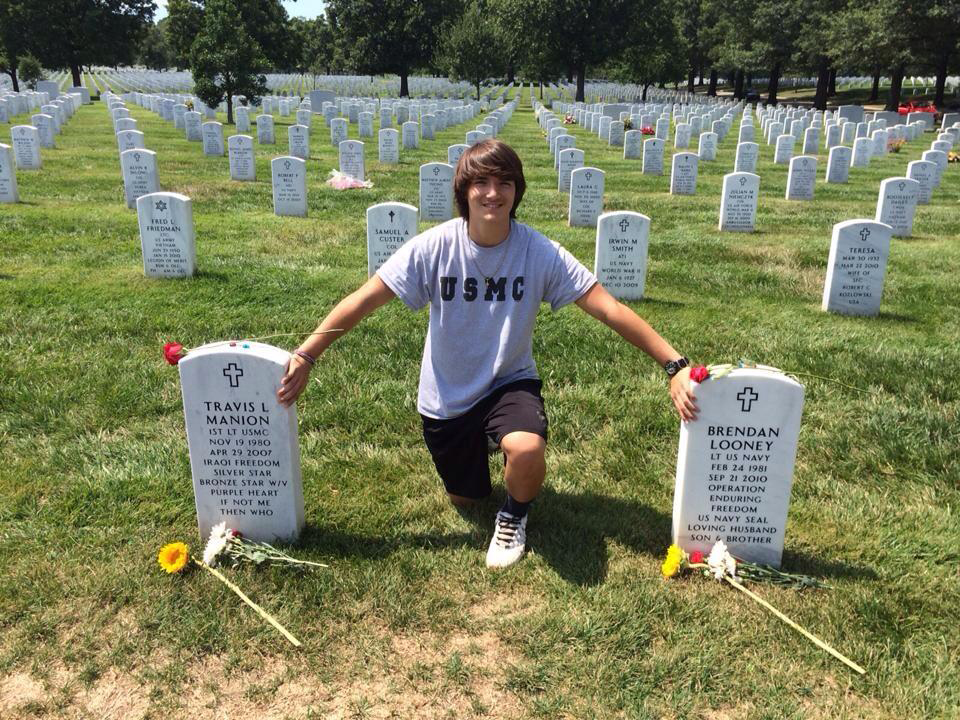 When my teenage son realized that Monday isn’t just a school holiday but is, in fact, a national holiday honoring the men and women who have died serving our country, he made an interesting comment about those who died. “It’s hard to appreciate that they’re real people because you never know who they are.”

Think about that: Despite the fact that our country has been actively at war for three-quarters of his life, my son has never known someone who died while fighting on America’s behalf, nor has he ever met someone who lost a loved one to war.

It looks as though only around 7.3% of all living Americans have served in the military at some point in their lives.

As of 2014, the VA estimates there were 22 million military veterans in the U.S. population. If you add their figures on veterans to the active personnel numbers mentioned above, 7.3 percent of all living Americans have served in the military at some point in their lives.

Unlike in World War II, when the draft meant that nearly everyone had family members and friends risking their lives, the battles in Iraq and Afghanistan have been waged by 2.5 million volunteers — less than 1 percent of the U.S. population. 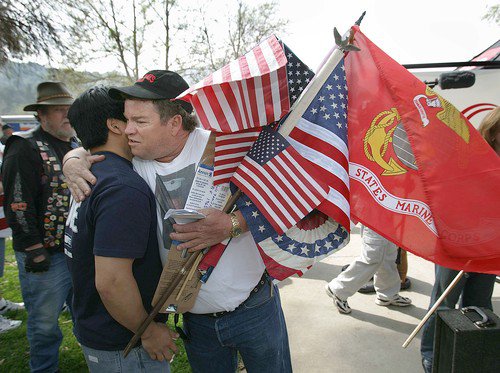 March 9, 2007 – Gold Star Dad Mark Crowley, center, hugs wordsmith after a rally to support U.S. troops. Wearing a t-shirt with an image of his son, killed while serving in Iraq, Crowley accepts dozens of flags to bring with him to Washington D.C. (Spencer Weiner / LAT)

I tried to enlist in 2007/8, but failed. Although I grew up a military brat, have met or corresponded with service members and Gold Star parents, I myself have not had a close personal friend who enlisted and who was subsequently killed while in theater. Most Americans seem to lack that personal connection; and live detached from the recent conflicts our military is still engaged in. 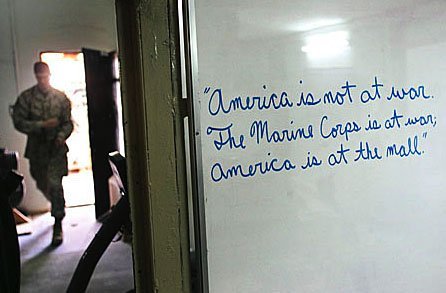 This was an op-ed published in WaPo last year, written by Jennie Haskamp, a Marine veteran:

Wednesday night, sitting in a pizza joint in the Bronx, watching the world go by, I was upset and couldn’t put my finger on why.

A friend said “Hey! Do you want to go to Fleet Week? It’s this weekend here in the city.”

What? No? Absolutely not. I don’t want to be in the midst of tens of thousands of people clamoring for a chance to look at a static display of Marine Corps and Navy equipment. I don’t want to see Marines and sailors dressed up, paraded around for community relations and recruiting purposes. I don’t want to watch any parades.

As I said it (barked it, really), my friend’s eyes widened and I recognized the frustration in my tone. I didn’t know why I was upset, at first. I paused, and while I was sitting there contemplating my outburst, I heard a commercial on the radio screaming through the tinny speakers.

“Beaches, beats and BBQs!” it said. “We’re your Memorial Day station with everything you need to kick off the summer in style!”

That’s when it hit me. I’m angry. I’ve come to realize people think Memorial Day is the official start of summer. It’s grilled meat, super-duper discounts, a day (or two) off work, beer, potato salad and porches draped in bunting.

~~~
A friend reminded me that plenty of people use the weekend the way it was designed: to pause and remember the men and women who paid the price of our freedom, and then go on about enjoying those freedoms.

I’m frustrated by people all over the country who view the day as anything but a day to remember our WAR DEAD. I hate hearing “Happy Memorial Day.”

So yeah. I’m frustrated by Memorial Day. And I’m angry about apathy.

I want to see people besides the small percentage of us who are veterans, know veterans, love veterans or lost veterans, understand what the day is about. It’s the one day on the American calendar meant to exemplify what it costs to be American and to be free… and we’ve turned it into a day off work, a tent sale and a keg of beer.

I’ve never perceived Memorial Day as “happy” or “celebratory”, although one might look at the occasion as a time to honor those who sacrificed by celebrating the life their sacrifices have afforded us. We are able to enjoy barbecues with friends and families and go to the mall for those Memorial Day sales…because of them. We can have the luxury of a 3-day weekend at the beach because of the beach they stormed 72 years ago.

Is it too much to ask all Americans to take a brief moment (let alone once a year) to really think about the service and sacrifices of so many, if nothing else? And the families who they left behind? 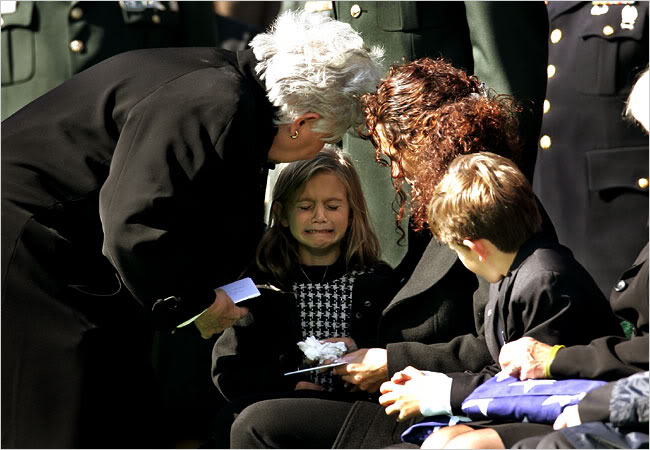 To truly feel the personal gratitude owed to each and every soldier who gave the ultimate? 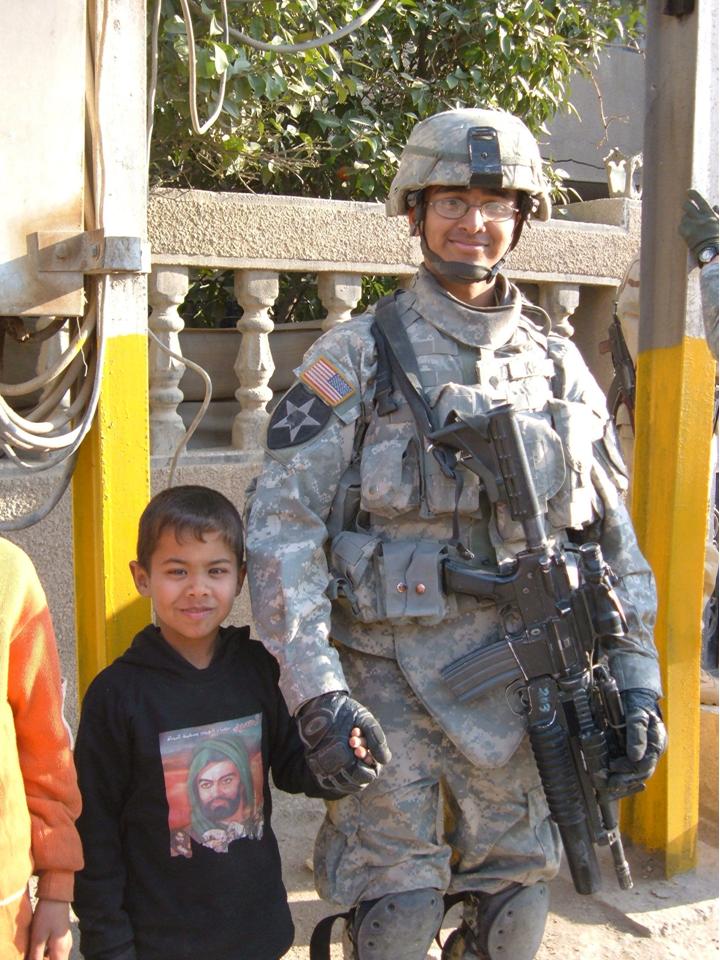 I contacted Cpl. Khan’s mother, via FB, back when Colin Powell gave mention to his name. We’ve been FB “friends” since. Absolutely a wonderful, patriotic, Muslim family.

When I look at this particular photo, I find it amusing that the Iraqi boy Kareem is holding hands with is sporting a shirt with the image of Mohammad. There was a time when such issues weren’t an issue.

These soldiers have names. They have families. They had dreams. They are real people.

Please take the time to honor them…. 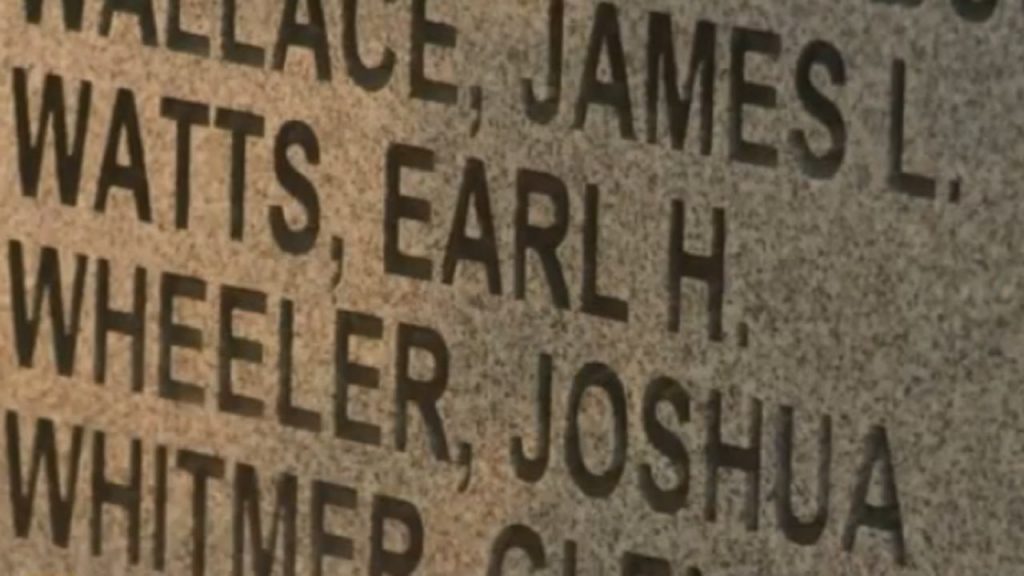 …As you have a solemn or happy Memorial Day. 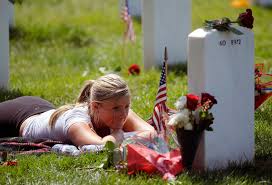 Taking a minute: Stephanie Montgomery traveled from Atlanta, Georgia to spend some time at the grave of her brother Sargent Thaddeus Montgomery at Arlington National Cemetery

Here is a short collection of photos I find moving: