“A Republic, if you can keep it.” Donald Trump and the Tyranny of the Mob… 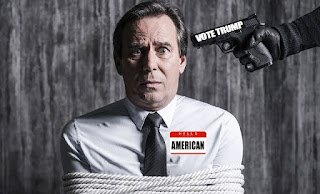 For the last eight years I’ve been shaking my head, simply bewildered that so many Americans could be so insane as to vote for Barack Obama for president. Not surprisingly, once Obama was ensconced in the White House things played out pretty much as predicted with virtually every month bringing new news of a faltering economy, a shrinking workforce and more government waste, intervention and tyranny. In 2012, after Fast and Furious, the IRS Tea Party scandal, Obamacare and, most of all, Benghazi, I was sure that Americans would rise up and throw out the anti American Obama and vote for the less than conservative, but exponentially superior Mittens Romney. Alas, the population spoke, and they doubled down on the fascist living at 1600 Pennsylvania Ave.

I was certain that year that if only a real conservative who could eloquently articulate the basic tenets of small government and fiscal responsibility had run he would have won by a landslide. After all, wasn’t it obvious that Barack Obama was the worst president in American history and the Democrats were rapidly devolving into open Socialism? But as we know, there was no such conservative running and Milquetoast Mitt was shellacked.

Now, in 2016 we find ourselves in an utterly different situation. We have a rock solid conservative running for the White House. Who can and does eloquently articulate the ideas behind our founding principles of limited government, individual liberty as well as the fundamental idea of American Exceptionalism. Yet, somehow he’s losing the GOP nomination fight… to a guy who’s a big government crony capitalist who has spent most of his life supporting Democrats and their liberal policies. Essentially he’s losing to a vapid populist whose idea of debating is throwing insults and lies around like confetti rather than providing substantive positions on practically any issue.

The next couple of weeks will tell the story, but the fact that we are at this point says a lot about the United States and the American people. That half the population are voting for an avowed socialist or a socialist in liberal clothing is sad. That one third of the remainder are actively supporting a populist candidate with little understanding of the issues at stake never mind the concepts of limited government, free markets and individual freedom upon which this country was founded, is disheartening.

The United States is not a democracy and never has been. We are a republic with a separation of powers and limited government that are unique in the history of government. It was that limited government and the companion individual liberties upon which the government is not to tread that created more prosperity for more people around the world than any government, state or entity in all of human history. Today all of that is in peril as almost 2/3 of the population are seemingly prepared to travel down a path of dismantling the limitations on government our Founding Fathers put in place.

After eight years under a president who decried the Constitution as a “Charter of negative liberties” the next president will have a choice. Either bring the progressive attack on the Constitution and freedom to a halt or pick up where Obama leaves off and continue down that path. Unfortunately, three of the four remaining candidates – John Kasich doesn’t count as a real candidate – are more than happy to jettison the Constitution and pander to the masses. Whether it’s Germany or Argentina or Venezuela, such populist movements rarely turn out well.

Populist movements share one underlying characteristic… they seek to harness the anger of the mob. Once the shackles of constitutional limits are thrown off, there is little to restrain government or the people other than the character of the leaders, and often that’s simply not enough. As Maximilien Robespierre learned, the consequences of doing so can be, shall we say, unforeseen… and unfortunate.

Today we see just such a mob mentality in the GOP race, and it starts at the top. Donald Trump claims the will of the people is being thwarted whenever he loses. He suggests the rules are tilted against him and therefore should be ignored. He’s even suggested that if he doesn’t walk away with the nomination despite not reaching 1,237, there will be riots. His followers have taken to preemptively threatening delegates to the convention if they don’t support him. Even his cheerleader Rush Limbaugh has suggested that if the Donald isn’t given the nomination his supporters will go nuclear. None of that bodes well for the future. If the threat of mob violence and anarchy are enough to do away with the rules when Trump has nothing but a vocal minority of GOP voters on his side, what chance do Constitutional restraints on government have when he is in charge of the entire government infrastructure?

The American people have twice put in office a man with a demonstrated antagonism towards the Constitution and he has spent the last eight years trampling on it. Once that bell has been rung, it’s hard to unring, and history has shown that the siren call of power is hard to resist, even for those without Donald Trump’s HUUUUGE ego. There are four candidates for president remaining. Three of them will pick up where Barack Obama leaves off and continue the progressive march towards the fall of the Republic because they see government as nothing more than an instrument for imposing their ideas on the population. And then there is Ted Cruz, who would turn back virtually everything Barack Obama has done because he understands the value of a strong Constitution, a limited government and a free people.

Emerging from Independence Hall after the Constitutional Convention, Ben Franklin was asked by a woman what kind of government we had. Franklin replied “A Republic, if you can keep it.” One can’t help but wonder if Americans are willing to vote to keep their republic and the rule of law or are instead going to finally pass the torch to the tyranny of the mob, also known as democracy.