Yes, something is very wrong with Hillary 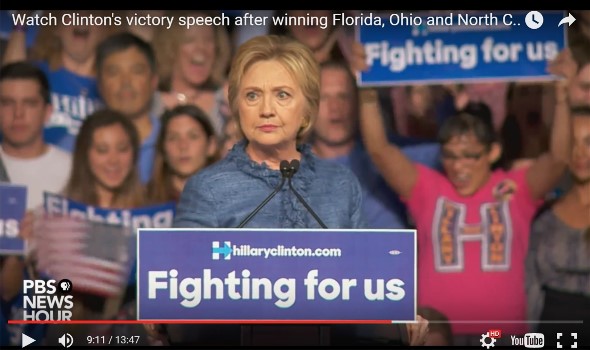 Is this the face of a person who just won several primaries?

So what exactly is going on here? Why won’t Bernie Sanders go away? And why does Hillary Clinton’s Bernie problem pose a danger not only to her but to the Democratic Party—even if she does (as it seems highly likely) secure her party’s nomination?

They then proceed to provide some explanation:

A look at Clinton’s political career provides a tougher explanation. Those younger voters who doubt her trustworthiness likely have no memory, or even casual acquaintance with, a 25-year history that includes cattle-futures trading, law firm billing records, muddled sniper fire recollections and the countless other charges of widely varying credibility aimed at her. They may even have suspended judgment about whether her e-mail use was a matter of bad judgment or worse.

But when you look at the positions she has taken on some of the most significant public policy questions of her time, you cannot escape noticing one key pattern: She has always embraced the politically popular stand—indeed, she has gone out of her way to reinforce that stand—and she has shifted her ground in a way that perfectly correlates with the shifts in public opinion.

Yes, she’s a hypocrite, but there’s more wrong with Hillary. She’s an inherently nasty and dishonest person. And perhaps brain damaged as I suggested previously.

Clinton asserted that no US lives were lost in Libya:

“Libya was a different kind of calculation,” she said of military involvement there in 2011 compared with current efforts in Syria during a MSNBC town hall in Springfield, Ill.

“We didn’t lose a single person,” the former secretary of State added. “We didn’t have a problem in supporting our European and Arab allies in working with NATO.
“We’ve got to continue to support the Libya people, to give them a chance, because otherwise you see what happened in Syria, with the consequences of millions of people flooding out of Syria, with more than 250,000 people killed, with terrorist groups like [the Islamic State in Iraq and Syria] taking up almost – huge blocks of territory, as big as some of the states in that area.”

Clinton also charged that the U.S. owed its foreign allies after their cooperation in the invasion of Afghanistan.

Perhaps she doesn’t consider Woods, Doherty, Stevens or Smith to be “persons.”

In 2008 Clinton was “unabashedly pro-coal” but today she promises to put coal out of business and coal miners out of their jobs:

“We’re going to put a lot of coal miners and coal companies out of business,” Clinton said Sunday night while boasting about her clean energy program — and with a big smile on her face.

In fact, this is standard Democratic policy: President Obama’s been throwing coal miners out of work for seven years now, aiming to deliver on his 2008 pledge to “bankrupt” the coal industry.

She thanked Nancy Reagan for her work on behalf of AIDS:

“It may be hard for your viewers to remember how difficult it was for people to talk about HIV/AIDS in the 1980s,” Clinton said. “And because of both President and Mrs. Reagan — in particular Mrs. Reagan –we started a national conversation.”

And then has been apologizing since for it.

Clinton suggested that the families of the Benghazi victims are liars.

At a townhall, an attendee complained to Clinton that the rising cost of obamacare was becoming a severe financial burden:

Teresa O’Donnell, an office manager in Ohio, told Clinton about how her monthly costs for health care insurance for her family of four went from $490 to $1,081 a month.

“I know Obama told us that we’d be paying a little more. But doubling, over doubling, my health insurance cost has not been ‘a little more.’ It has been difficult to come up with that kind of payment every month. I would like to vote Democratic, but it’s cost me a lot of money, and I’m just wondering if Democrats really realize how difficult it’s been on working-class Americans to finance Obamacare?” O’Donnell asked.

And in another galactic moment of irony Clinton stipulated that “Our commander-in-chief has to be able to defend our country, not embarrass it.”

Clinton: "Our commander-in-chief has to be able to defend our country, not embarrass it." https://t.co/isvAB3TeKb https://t.co/LGqhKux1ce 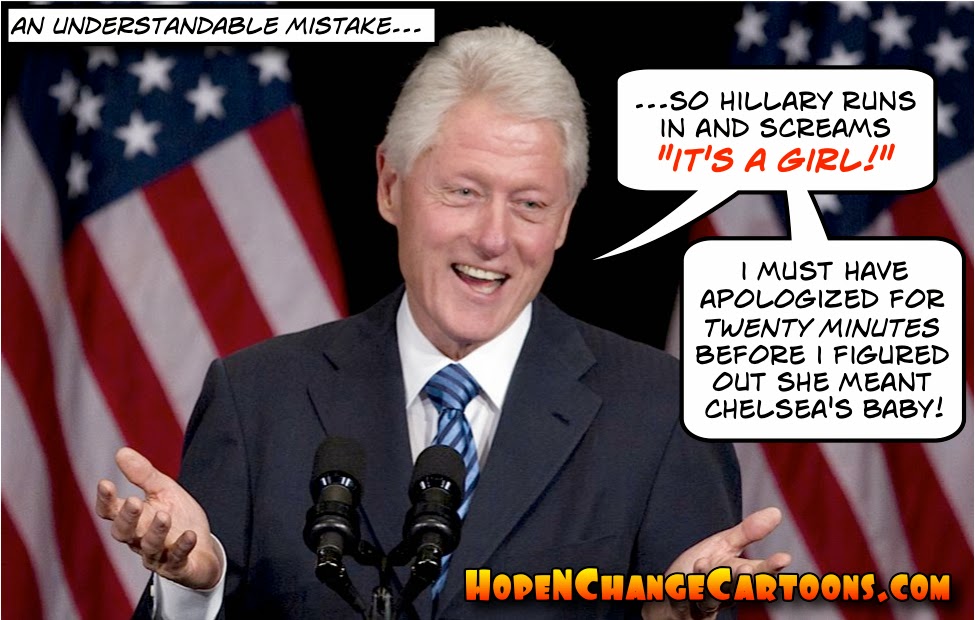 What about electing someone whose spouse could be a real embarrassment? It’s really no wonder that Hillary staffers have trouble ginning up enthusiasm for Clinton.

Then there’s that irritating voice:

And the ever-changing accent:

Well Obama’s hope and change didn’t turn out the way his supporters thought it would. But if sure fooled at lot of people.
So I’m not sure what Hilliarys theme is other than “Vote for me because I squat to pee”

My theory about why Hillary is so desperate to be President: she knows it’s the only chance she has of staying out of jail.

@Mully: #1
That would make a great bumper sticker!
But glass to fit my car is hard to find. And paint is expensive.

Want to commit suicide? Put a Trump sticker on your motorcycle.

I understand why she wanted to lie about classified information on her server or about her own incompetence causing the Benghazi disaster (though they could have found a better story). But I have to wonder why she would bother lying about dodging sniper bullets in Kosovo when she KNOWS there is video and numerous eye witnesses, many of those military personnel that HATE her and her military-loathing husband.

She IS demented… and she LIKES to lie.

I detest Hillary, just like I do Trump, but I applaud them at their ages to take on the daunting task of all this campaigning. I know I could never do it. Bernie is 74 for God’s sake, and Hillary and Donald are like 69, I think. They have a lot of energy, but it’s taking a toll on them. You will never see Trump stepping up on a platform, because his legs are so bad. They pan away at that moment. All of their voices are going at this stage of the game, and maybe that’s a good thing. No Trump or Hillary in my future.

@Robert What?: I actually believe that many democrats see no reason why clinton can’t be president and serve a jail sentence at the same time if need be ,call it a type of white house arrest !

That might be a selling point…If she’s under white house arrest ,She can’t be out playing golf or attending fund raisers..