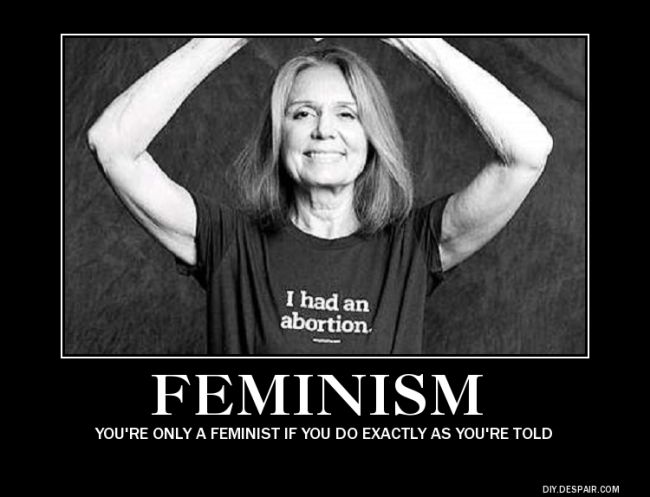 The feminist movement is dead. It died at the hands of Gloria Steinem. Cause of death was political strangulation.

Gloria Steinem had made a name for herself for purporting to be a voice for women’s rights beginning in the 60’s and 70’s. She was an icon for women for a long time but has repeatedly compromised her alleged principles for politics and her biases finally overtook her.

I began to loathe Steinem for her painful hypocrisy in the 90’s when she (and HIllary) went Tammy Wynette during the Bill Clinton Presidency. She stood by her man Bill despite his chronic abuse of women. She went mum while the press pounded Paula Jones. Clinton ally James Carville said “If you drag a hundred dollar bill through a trailer park, you never know what you’ll find.” Steinem said nothing. She let Evan Thomas call her a “just some sleazy woman with big hair coming out of the trailer parks” without any challenge or defense.

Then, when Kathleen Willy accused Clinton of groping her on the day her husband died Steinem asserted that Clinton was entitled to a freebie.

“The truth is that even if the allegations are true, the President is not guilty of sexual harassment. He is accused of having made a gross, dumb and reckless pass at [Kathleen Willey] during a low point in her life. She pushed him away, she said, and it never happened again. In other words, President Clinton took “no” for an answer…”

Steinem’s moral compass has rusted considerably since then to the point of being inoperable now. She defends Barack Obama despite his sucking up to Muslim nations which stone women to death for mere accusations of adultery:

Bill Maher spoke with iconic feminist Gloria Steinem tonight about a cause he thinks more feminists should care about: radical Islamic law.

He brought up how horribly women are treated in the Muslim world and asked why it isn’t a bigger feminist issue. Steinem argued that it actually is, pointing to feminists in Muslim nations attempting to push reforms.

She said that “all monotheism is a problem,” but Maher jumped in to say that Islamic nations are particularly horrible to women and bad on women’s rights.

He said, “It would seem that Sharia law in 40 countries should be the cause.”

Then Steinem jumped the shark. She suggested that young women who aren’t lock-step in support of Hillary Clinton 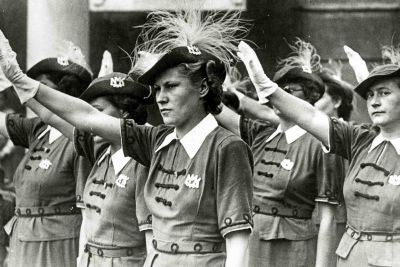 and are lean more toward Bernie Sanders are supporting Sanders to “chase boys.”

Feminist icon Gloria Steinem has drawn the wrath of the Twitterverse for suggesting that young women supporting Bernie Sanders’ presidential campaign are doing so to gain the attention of men.

“When you’re young, you’re thinking, ‘Where are the boys? The boys are with Bernie,’” Steinem told Bill Maher Friday night on the comic’s HBO show “Real Time.”

Maher leapt right on her comment. “Now if I said that, ‘Yeah, they’re for Bernie because that’s where the boys are,’ you’d slap me,” he said. 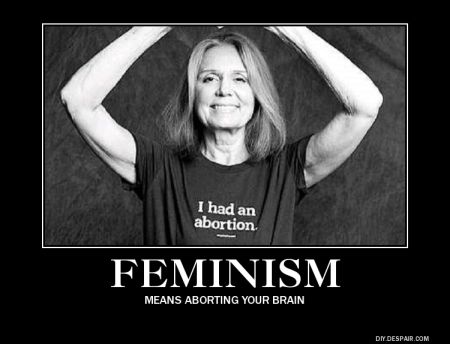 Madeline Halfbright also came down on women who dared to challenge the Politburo line. In fact, there would be a special place in hell for women who didn’t vote for Hillary:

Attempting to sway young women to support Hillary, Albright said, “We can tell our story about how we climbed the ladder and a lot of you younger women don’t think you have to — it’s been done — it’s not done and you have to help. Hillary Clinton will always be there for you.

“And just remember: there’s a special place in hell for women who don’t help each other,” she said

Young women in New Hampshire were offended by the way Hillary Clinton uses her gender to garner support, an MSNBC survey revealed Friday.

When MSNBC anchor Tamron Hall asked young female voters about Hillary Clinton’s claim on Wednesday that she is not an establishment candidate because she is a woman, they responded negatively.

One of the respondents said that she did not like how Clinton assumed that her feminism was identical to the feminism of all women.

“I also am a woman. I also face discrimination as being a woman. Her feminism does not represent my feminism, and I think it’s really important to differentiate that,” one young woman said. Her complaint is a common one among young women and reveals a generational divide within the Democratic Party.

One would have thought that feminism was about empowerment to think for one’s self and make one’s own choices and not have to toe the dictated line. One would think that real feminist icons would respect those choices.

Apparently not. Feminism is dead, but then I never really believed it was anything other than a branch of liberal politics. Now we see that if you don’t march in the proper line, you’re just silly little girl who can’t think for herself.