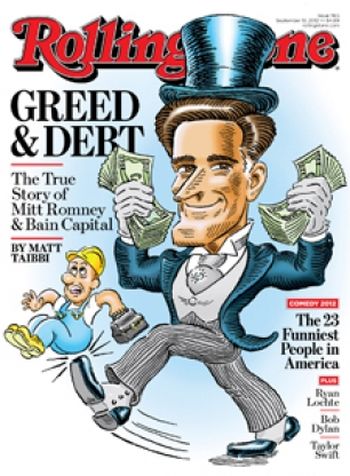 Stink Progress: Romney’s Bain Capital Made Billions While Bankrupting Nearly One-Quarter Of The Companies It Invested In

What an awful company, right? So what kind of pathetic low life would dare soil herself begging a Bain Capital-affiliated company for twelve pieces of silver?

Clinton abandoned Iowa to suck up Franklin Square Capital money and was then to suck up to Back Rock, a Bain affiliate but she postponed the Bain affair under heavy criticism from Bernie Sanders. Then she postponed it again as Anderson Cooper called her on the carpet for her Wall St ties in the last townhall meeting, but not to wrry- she’s still going- just a bit later.

NEW YORK — Hillary Clinton has postponed another fundraiser with financial services executives amid heavy criticism from rival Bernie Sanders that she is too close to Wall Street.

Clinton will no longer attend an event in Boston scheduled for Friday that was to be hosted by Jonathan Lavine, managing director of Bain Capital affiliate Sankaty Advisors, sources close to the matter said.

The event has not been canceled but will now be held sometime after the New Hampshire primary, which takes place Feb. 9. It is the second such postponement in the last two weeks. The Clinton campaign last week said a New York City event that was set for Thursday with executives from investment management firm BlackRock would now be held Feb. 16th.

No joke? Obama took millions from Wall St? Maybe that’s why obama never indicted, tried or imprisoned a single one of those big bankers he promised he would indict, try and imprison.

Now Hillary promises us the same while her fingers do the walking in their pants pockets. Because everyone knows that Goldman Sachs is not the sort of company that looks for returns on its investments.

A commenter from a 2012 post I wrote said this:

Bain’s business activity is the modern equivalent of shipwrecking. They only thrive when other people’s ships are running up on the rocks.

Do you really want a man who has always profited more from failures than from successes put in charge of the whole U.S. economy?

It seems that Hillary’s not above it but we don’t hear a single word from the Hillary supporters now.

The truth about Bain? You can read about it here and here. If that’s not enough for the idiot Hillary supporters I offer this:

The fourth thing, the one WaPo omits, is that Zients is a Bain guy.

Donald Trump say that politicians are “full of shit.”

They are, but not nearly as full of shit as Hillary supporters. As I said, Hillary is everything liberals claimed they hated in Mitt Romney.

So up yours, Rolling Stone. Up yours, WaPo, Stink Progress, New Yorker. Up yours, obama.

And up yours, Hillary supporters.

PS: I wouldn’t be surprised if Clinton pulls another squeeker in New Hampshire with some sort of special counting thing. Or a coin toss. See if she once again declares victory before all the votes are counted as she did in Iowa.

If those on the Left had brains they would be suffering from severe cognitive dissonance headaches.
But, lucky Hillary.
Not only are liberals brainless they also have the memory of gnats.

A G A I N…. liberals have no principles. No foundation. They have nothing they believe in but “the ends justifies the means”. So, while they attack, largely with lies, Romney for being a part of the success, through management and decision making, of Bain, they happily look the other way while Obama and Hillary take millions from the same people they pretend to hate (they only hate the fact that someone else has more money than they do… yet another inconsistency as they can happily overlook how wealthy Bill and Hillary have become by selling their influence).

So, when someone like Romney takes failures and turns them into profits and jobs for others, this is bad. But when Hillary takes millions of dollars from people for “speaking” they would otherwise be regarding as loathsome, no problem because the ends, electing someone that promises to ladle on more free goodies, justifies the means, lying and crawling in bed with the very people they preach are destroying the government.

Hillary…. what a perfect example of hypocrisy. No wonder liberals love her.

Hypocritical is one of the most common characteristic of liberals. You can see that on FA. I think that this characteristic results from the inability of liberals to think rationally. This supports Brother Bob’s 2 of 5 post!

@Rich Wheeler: Says one who voted for Obama… twice. How’s that working out… for the world?

Bain knows how to make money, they are not going to waste money on the GOP in 16

@john: Those who have been paying attention with their eyes and ears already know. They have been giving Hillary millions.

But, no doubt, if she becomes President, she will take them to task. Right?

@Bill: Bill the only one who will not is Sanders
I guess that means that you are advocating for him, right?
Which candidate do YOU believe will be harshest on the donor class?
Are you no longer in favor of the “trickle down” theory of economics?

@John: Who says we HAVE to beat down the donor class? Not me. All that has to be done is to NOT be in their pocket. Only Trump can fit that description. You backing Trump?

Sanders is a certifiable idiot if he truly believes the crap he is dishing out to our stupid college students and others of the “gimme freebies” class.

What makes you think I do not believe in trickle down? The only thing that gets in the way of prosperity is liberal policies and social engineering.

What is significant in Hillary’s behavior is that she lies out of both sides of her mouth; she wants to pretend she is for the little guy and tough on Wall Street (which are not necessarily synonymous) while she enriches herself grotesquely taking millions of dollars from the very people she pledges to hold to account.

@Bill:
Trump??? No I am not backing him
Of course living here in NY my vote doesn’t really matter
I am backing the Democratic Party as I believe they better represent my values
Do you live in battleground state? Do you think any GOP candidate can win?
Did you think Obama was going to win easily? Twice?
As if Feb 2 bookies (Paddy power)are offering 7-1 odds on Trump winning
How much are you risking?
Ahh yes the Clinton wealth, that sooo
Infuriates the uber right

If Hillary was preoccupied with “wealth” (which she doesn’t seem to actually enjoy spending) she could bank a lot more by not becoming POTUS that will apparently reduce her income
Wealthy liberals the right looks at them as class traitors
Well if you think Trump IS going to win
Sell the farm, go all in, and make 700% profit

@John: Nope, I live in Texas where they threw off the yoke of Democrats. As much as the left tries, liberalism will not take hold here. Freedom is too important. If only the federal government would do its job and secure our border, life would be better.

Their wealth or even how they got it doesn’t bother me. It is the hypocritical Clinton condemnation of others that have wealth, people that actually risked their own assets to try and succeed. The Clinton’s have gained their wealth and power through corruption and influence peddling yet they condemn others with wealth. She doesn’t like to spend money? I guess that is why she travels exclusively on private jets and owns several multi-million dollar homes… because money repulses her.

Have you seen how much money collected as Secretary of State? Imagine the accumulation of wealth by virtue of the Office of the President. And, of course, there is the power of life or death over people, something else she seems addicted to.

Do naive people just naturally gravitate to people like Hillary?

@John: Hillary got her wealth by promising to support her donors when she became president. Of course as a liberal you would not be concerned where she got her wealth. You make Brother Bob’s points!