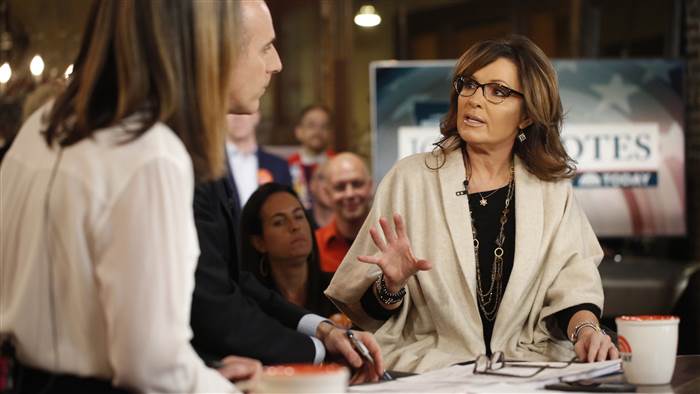 Once again Matt Lauer and Savannah Guthrie proved themselves to be the left wing slime buckets I regard them to be. This morning they hosted Sarah Palin on the Today Show ostensibly to talk about her endorsement of Donald Trump. Now see how this is portrayed by the author Stump:

Sarah Palin joined TODAY on Monday to talk about the Republican hopefuls in the Iowa caucuses, and she also addressed controversial comments she made on the campaign trail involving PTSD and President Obama.

The former Alaska governor and 2008 Republican vice presidential candidate, who endorsed Donald Trump in a speech in Iowa two weeks ago, told Matt Lauer and Savannah Guthrie that she likes the billionaire real estate mogul’s chances when Iowans head to the polls Monday night.

She addressed them alright, when Guthrie and Lauer ambushed her with the topic of her son’s arrest. (video is at the link) Palin was asked to appear on the Today Show to talk about Donald Trump and it was pretty damned obvious that Palin was not informed that the Today Show vipers would box Palin in and attempt to dun her.

Let’s look at what Palin did say about her son.

Addressing what she called “the elephant in the room” during a rally in support of Donald Trump, Palin said her son Track came back “different” from his year-long deployment in Iraq.

“My son, like so many others, they come back a bit different, they come back hardened, they come back wondering if there is that respect for what it is that their fellow soldiers and airmen every other member of the military so sacrificially have given to this country,” she said after alluding to the arrest.

“It starts from the top. The question though it comes from our own president, when they have to look at him and wonder, do you know what we go through, do you know what we’re trying to do to secure America and to secure the freedoms that have been bequeathed us?” she added. “So when my own son is going through what he goes through, coming back, I can certainly relate with other families who feel these ramifications of some PTSD and some of the woundedness that our soldiers do return with.”

Track Palin, 26, was arrested Monday night and charged with interfering with the report of domestic violence, possession of a firearm while intoxicated and assault on his girlfriend.

Do I think she has a point? Hell yes. Obama burns through Secretaries of Defense and burns through Generals like no one I’ve ever seen. All are critical of his style of micro-management. Here- pick one.

What has Obama done for vets? Pretty much nothing.
Obama’s Vapid Response to the VA Scandal

It wasn’t until Wednesday that President Barack Obama spoke in public about the scandal.

He’d learned of it from news reports, said White House Press Secretary Jay Carney. That’s also how the president learned the Obamacare website was a mess, the IRS was targeting conservative groups and security at the Benghazi consulate was lax, aides said.

Evidently no one who works for Mr. Obama ever tells him anything.

Of the VA scandal, Mr. Obama said, “I will not stand for it. There must be consequences.”

But he took no steps either to alleviate the suffering of veterans or to punish those who’ve neglected them. The man in charge of the VA while all this was going on is “a fine public servant,” the president said.

“Under his watch at my own hospital in Atlanta, four of our soldiers committed suicide, and the inspector general of the VA laid the blame directly at the foot of the VA administration,” Rep. Scott stormed in a fiery speech on the House floor.

She did not blame Obama for her son’s PTSD. She blamed him him for not giving a damn. Can PTSD lead to violence with domestic partners? Absolutely. More here and here.

As Palin said “You brought me here to talk about the Iowa politics… and not to talk about my kids.” (about 3:15)
Then that cretin Lauer, with his best obama sucking manner, drops the hammer: “Do you regret the comment, Gov. Palin,  on that day of the endorsement?” (about 4:09)

It was patently clear that Palin was invited to the set so the liberals could knee-cap her. She held her own well and refused to seek forgiveness from Pope Lauer and Pope Guthrie. Good for her. With the liberal media it’s always one cheap shot after another in the war on Sarah Palin.

Login
wpDiscuz
42
0
Would love your thoughts, please comment.x
()
x
| Reply
‹ Back to Categories