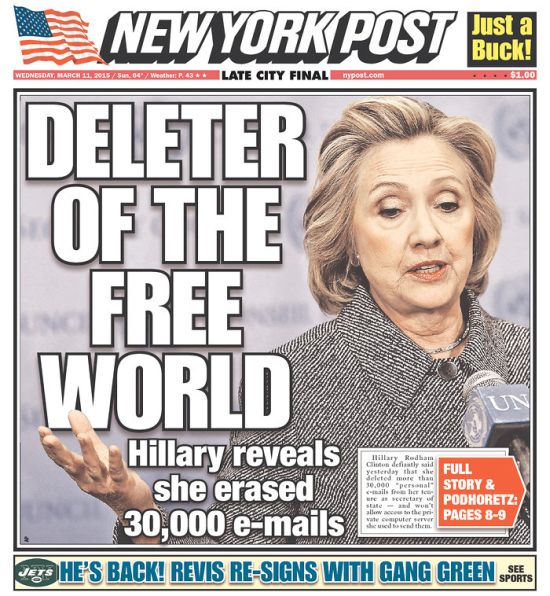 “I’m certainly well aware of the classification requirements and did not send classified material.”

“I am confident that I never sent nor received any information that was classified at the time it was sent and received.”

Now we know why they weren’t marked classified. The lies just keep piling up. Fox News:

The latest batch of emails released from Hillary Clinton’s personal account from her tenure as secretary of state includes 66 messages deemed classified at some level, the State Department said early Friday.

In one email, Clinton even seemed to coach a top adviser on how to send secure information outside secure channels.

But this time it was different. Among the Clinton emails was found this bomb:

Clinton, the front-runner for the Democratic presidential nomination, has repeatedly maintained that she did not send or receive classified material on her personal account. The State Department claims none of the emails now marked classified were labled as such at the time they were sent.

However, one email thread from June 2011 appears to include Clinton telling her top adviser Jake Sullivan to send secure information through insecure means.

In response to Clinton’s request for a set of since-redacted talking points, Sullivan writes, “They say they’ve had issues sending secure fax. They’re working on it.” Clinton responds “If they can’t, turn into nonpaper [with] no identifying heading and send nonsecure.”

Ironically, an email thread from four months earlier shows Clinton saying she was “surprised” that a diplomatic oficer named John Godfrey used a personal email account to send a memo on Libya policy after the fall of Muammar Qaddafi.

These two paragraphs are very damning.  They show both that she knew she was telling people to send secret information in a way that wasn’t secure, that her previous statements that the secret material wasn’t labeled may have been because she thought she could hide that it was secret and protect her from liability (she is wrong legally even if she thought this excuse could confuse the issue), and finally that she called out others for doing what she was doing.

Of course she knew. This also explains why all of her emails weren’t marked classified.

She stripped them of their markings.

This is what’s being released. Imagine what’s not.

Clinton turned over the emails she did not destroy, but she and her cronies did not turn over the meta data, which would provide much more information than Clinton wants to divulge.

One IT expert who has looked into Clinton’s unique email arrangement has explored the importance of the information contained in the email headers.

“If anyone ever got and [sic] email from Hillary and still has the email then they can look in the received lines in the message headers to see where the message has been,” Marc Perkel, a former systems administrator at the Electronic Frontier Foundation, wrote on his blog in March.

“This is worth looking into because every received line is another server where Hillary’s outbound email could have been tapped.”

Former US Attorney Joseph DiGenova thinks it likely that Hillary will be indicted:

“They (the FBI) are going to make a recommendation that there is going to be charges against a series of people, ” DiGenova said on the program..

“What I know is that the FBI has been building a compelling — an unassailable case against Hillary and her surrounding group inside the State department,” he said.

Mr. DiGenova must have some inside knowledge about the investigation because so far FBI director has refused to answer questions about the ongoing investigation into whether the private emails were mishandled.

Interestingly, this comes at the heels of the U.S. State Department’s Inspector General Office findings that the department gave “inaccurate and incomplete” answers to those who were trying to seek then Secretary of State Hillary Clinton’s records. For example, the report says the State Department mistakenly told a group they had no information regarding Hillary Clinton’s personal email account.

I’ve got a bottle of Cristal ready.