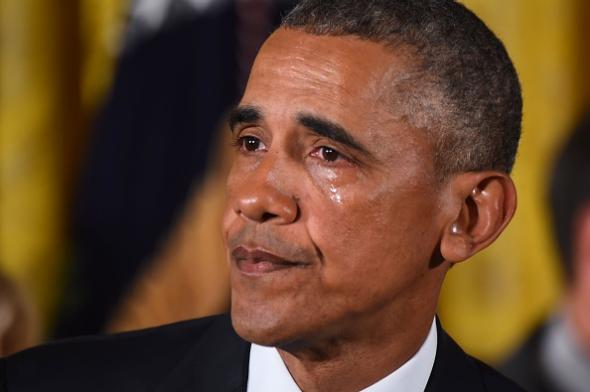 Today Barack Obama stood before a gaggle of idiots and channeled John Boehner. Good God, I couldn’t wait for Boehner to leave lest we have to endure his crying one more time. So what does Obama do? He channels Boehner and sets loose a torrent of crocodile tears carefully summoned to convince you that he really cares about something other than himself.

He doesn’t, of course. But that’s not why I am writing this. I was listening to the news on TV when Obama said something that absolutely set me off. Forget for the moment that nothing he proposed would have prevented San Bernardino or Chattanooga or Sandy Hook or Fort Hood. That’s why he discouraged any retrospective analysis with regard to his new restrictions. Never mind that.

Obama always presents himself as the man who fell to Earth and became President just today.  To wit:

How did this become such a partisan issue? Republican President George W. Bush once said, “I believe in background checks at gun shows or anywhere to make sure that guns don’t get into the hands of people that shouldn’t have them.” Senator John McCain introduced a bipartisan measure to address the gun show loophole, saying, “We need this amendment because criminals and terrorists have exploited and are exploiting this very obvious loophole in our gun safety laws.” Even the NRA used to support expanded background checks. And by the way, most of its members still do. Most Republican voters still do.

” I think we can disagree without impugning other people’s motives or without being disagreeable.”

“Those aren’t the kinds of folks who represent our core American values.”

Remember when you said we were “treacherous enemies”?

You are full off shit, Barack. You never stop impugning the motives of others. You never stop ridiculing and mocking. I didn’t forget when your campaign called Mott Romney a “murderer.”

Then he dares ask:

How did we get here? How did we get to the place where people think requiring a comprehensive background check means taking away people’s guns?

“Contrary to claims of some presidential candidates, apparently, before this meeting, this is not a plot to take away everybody’s guns.”

But all I hear is

But all I hear is

“If you like your guns, you can keep your guns.”

Obama constantly pees in the hot tub and he professes to wonder why no one other than democrats will jump in with him.

How did we get here? We got here, Barack, thanks to you.

We got here, Barack, because you’re a goddam liar and only idiots believe anything you say. Even fewer of us treacherous, hostage taking enemies who don’t share your “American values” would be so galactically stupid as to trust you.  As ye sow, so shall ye reap, sunshine. Now your true legacy will be causing gun ownership to skyrocket. The greatest gun salesman in history. That toxic atmosphere you created burns the alveoli, doesn’t it? It makes your eyes water.