The incredible, amazing, astonishing coincidences of Secretary of State Clinton 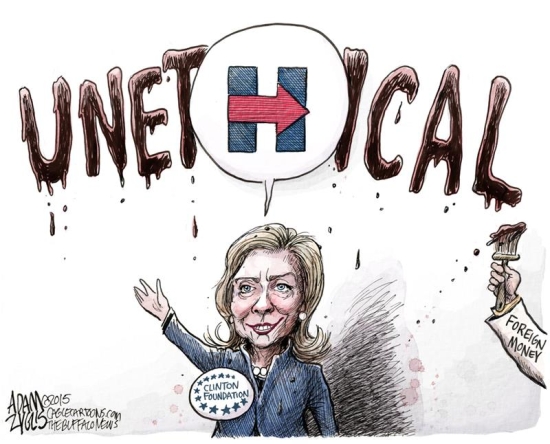 Both the Clinton’s and the Clinton Foundation profited handsomely from Hillary Clinton’s tenure as Secretary of State. They even felt free to violate the law:

The Clinton Foundation accepted millions of dollars from seven foreign governments during Hillary Rodham Clinton’s tenure as secretary of state, including one donation that violated its ethics agreement with the Obama administration, foundation officials disclosed Wednesday.

Most of the contributions were possible because of exceptions written into the foundation’s 2008 agreement, which included limits on foreign-government donations.

The agreement, reached before Clinton’s nomination amid concerns that countries could use foundation donations to gain favor with a Clinton-led State Department, allowed governments that had previously donated money to continue making contributions at similar levels.

The new disclosures, provided in response to questions from The Washington Post, make clear that the 2008 agreement did not prohibit foreign countries with interests before the U.S. government from giving money to the charity closely linked to the secretary of state.

In one instance, foundation officials acknowledged they should have sought approval in 2010 from the State Department ethics office, as required by the agreement for new government donors, before accepting a $500,000 donation from the Algerian government.

The money was given to assist with earthquake relief in Haiti, the foundation said. At the time, Algeria, which has sought a closer relationship with Washington, was spending heavily to lobby the State Department on human rights issues.

While the foundation has disclosed foreign-government donors for years, it has not previously detailed the donations that were accepted during Clinton’s four-year stint at the State Department.

WaPo issued a warning about this highly incestuous arrangement:

Rarely, if ever, has a potential commander in chief been so closely associated with an organization that has solicited financial support from foreign governments. Clinton formally joined the foundation in 2013 after leaving the State Department, and the organization was renamed the Bill, Hillary & Chelsea Clinton Foundation.

The Clinton’s are not known for letting things like ethics get between them and power and money. An article in the Wall St. Journal documents some of the incredible, amazing, astonishing coincidences that happened while Hillary Clinton was Secretary of State. One of them involved allowing customs pre-clearance in Abu Dhabi, UAE. It was opposed by the Chamber of Commerce, the AFL-CIO Pilots Union, and more than 150 lawmakers of both parties. Then:

While Mrs. Clinton’s State Department and the Department of Homeland Security were working out a “letter of intent” with Abu Dhabi for the facility, Mr. Clinton sought permission to give a paid speech in Abu Dhabi. The invitation came from the Abu Dhabi Global Environmental Data Initiative, a group created by Sheikh Khalifa bin Zayed Al Nahyan, president of the United Arab Emirates and emir of Abu Dhabi, according to Mr. Clinton’s request to the State Department.

In December 2012, Mr. Clinton sought approval for another speech in Abu Dhabi before the World Travel and Tourism Council, State Department emails show. The request said the speech was sponsored by three Abu Dhabi tourism agencies, all owned by the government. A conference sponsor was Etihad Airways, the chief beneficiary of the inspection facility, the group’s promotional materials said. An Etihad spokeswoman referred questions about the facility to the government of Abu Dhabi.

Mr. Clinton gave a keynote address on the value of tourism. He was paid $500,000, his wife’s disclosure filings say.

One week later, the U.S. and Abu Dhabi signed the final agreement for the facility. Etihad Airways operated its first flight from it last year.

A million dollars later the deal was secured. Coincidence, says Hillary’s campaign. They said any such thoughts are “farcical.” The coincidences did not end there:

Mr. Clinton also had a large payday from Oracle Corp. ORCL -1.06 % : a total of $500,000 for two talks given or approved while Mrs. Clinton was secretary of state. He gave one in October 2012 as the company was urging the State Department to increase the number of skilled-worker visas being issued, lobbying reports show.

There are many more such coincidences at the link. The Journal includes this:

In several instances, State Department actions benefited those that paid Mr. Clinton. The Journal found no evidence that speaking fees were paid to the former president in exchange for any action by Mrs. Clinton, now the front-runner for the Democratic presidential nomination.

There is, however, one huge flaw in this adventure. The money Bill Clinton received wasn’t just Bill Clinton’s money. It is also Hillary Clinton’s money, as they file tax returns jointly and are (kind of) married. Every time Bill got paid, Hillary got paid. Every time State Department actions benefited Bill, they also benefited Hillary. Her actions as Secretary of State put money directly into her pocket.

The Clinton Foundation has filed fraudulent tax returns and has had to refile.  In another amazing coincidence, there seems to be no penalty for under-reporting millions in income. The Foundation truly reflects the nature of the Clintons.

That is there no written quid pro quo is the Clinton defense of this scheme. It is the only defense. What they did is clearly wrong. They used her position as a high level government official to enrich themselves and their Foundation. God knows what they would do with her as President. Given their lack of ethics one wonders what they wouldn’t sell out.

The Clinton campaign maintains that these are simply coincidences. As Leroy Jethro Gibbs would say:

Rule 39: There is no such thing as coincidence.

Rule #36: If it feels like you’re being played, you probably are

America is being played.