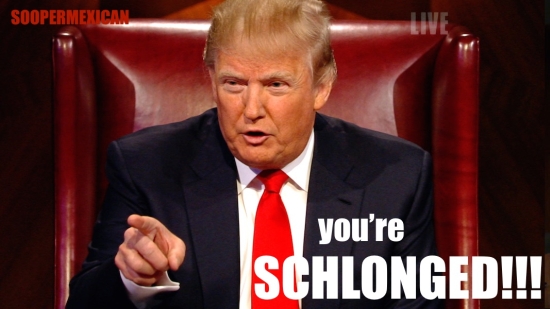 When Donald Trump made the statement that Hillary Clinton got “schlonged” in the 2008 election, he was immediately set upon by the liberal media for the use of a vulgarity.

Donald Trump is being criticized for the below video, where the presidential candidate says Hillary Clinton got “schlonged” when she lost to President Obama in 2008. By Trump turning the word “schlong” into the verb “schlonged” to describe a woman losing to a man, “The Donald” is being taken to the mat for using the vulgar slang, which describes a man’s penis, in such a manner.

Trump used the word schlonged while trying to explain how Clinton was ahead in the polls but got “schlonged” when she lost to Mr. Obama in 2008. Now that Trump has said “schlonged,” the world is reacting to his usage of the word, with some calling getting it a sexist way to describe Clinton losing to President Obama.

In what can only be described as galactic irony, CNN offered this:

Grand Rapids, Michigan (CNN)—Donald Trump attacked Hillary Clinton in vulgar terms Monday night, saying that her bathroom break during the last Democratic debate was just too “disgusting” to talk about and then stating she “got schlonged” by Barack Obama in the 2008 presidential race.

“Even a race to Obama, she was gonna beat Obama. I don’t know who would be worse, I don’t know, how could it be worse? But she was going to beat — she was favored to win — and she got schlonged, she lost, I mean she lost,” Trump said, using a vulgar Yiddish word for a man’s penis.

To the surprise of none of us, the left wing media enjoyed throwing around vulgarities when the target was conservatives. Anderson Cooper, who likely well knows what the term “teabagger” means, gleefully tossed it off in an exchange with David Gergen:

CNN anchor Anderson Cooper followed his colleague David Shuster into the gutter on his Anderson Cooper 360 program on Tuesday in making a vulgar “tea-bagging” joke about Republicans/conservatives. After CNN’s senior political analyst David Gergen remarked that Republicans were “searching for their voice” after two electoral losses, Cooper quipped, “It’s hard to talk when you’re tea-bagging.”

Cooper had Gergen and chief business correspondent Ali Velshi on to comment on President Obama’s economic speech earlier that day at Georgetown University. Cooper had asked Gergen about the Republicans’ “positioning” in response to the speech. The analyst touted how the GOP was “in disarray” and that they “have not yet come up with a compelling alternative, one that has gained popular recognition.” Cooper replied, “Tea-bagging. They’ve got tea-bagging.”

Rachel Maddow grabbed hold of it:

April 9
Rachel Maddow is the first to mock the Tea Party’s use of the phrase on her left-leaning MSNBC show. “Even Governor Mark Sanford of South Carolina is getting in on the hot tea-bagging action,” she says, stifling laughter. (Watch Rachel Maddow joke about the “tea baggers”)

April 13
David Shuster, filling in for liberal commentator Keith Olbermann on MSNBC, also makes fun of the phrase. “While the parties are officially toothless, the tea-baggers are full-throated about their goals,” he says. Jeff Poor at the Business and Media Insitute says that the MSNBC comments are “lost in juvenile criticism and ignoring the reason there is discontent from the conservative base”

Obama couldn’t resist the use of the vulgarity:

In Jonathan Alter’s “The Promise: President Obama, Year One,” President Obama is quoted in an interview saying that the unanimous vote of House Republicans vote against the stimulus bills “set the tenor for the whole year … That helped to create the tea-baggers and empowered that whole wing of the Republican Party to where it now controls the agenda for the Republicans.”

The term “schlonged” is an old Yiddish term and it is part of the common New York vernacular.
The term “tea bagging” is a vulgarity, plain and simple. The same left which is outraged by the use of the term “schlonged” happily yanks out the term teabagger. But as we’ve shown over and over, one cannot be a liberal without being a hypocritical moron.