Hillary says the families of the Benghazi dead are liars 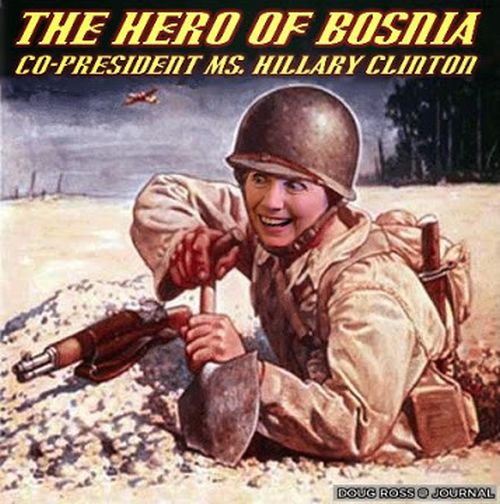 It was nearly twenty years ago. William Safire had her pegged. He said Hillary Clinton was a “congenital liar.”

Americans of all political persuasions are coming to the sad realization that our First Lady — a woman of undoubted talents who was a role model for many in her generation — is a congenital liar.

Drip by drip, like Whitewater torture, the case is being made that she is compelled to mislead, and to ensnare her subordinates and friends in a web of deceit.

1. Remember the story she told about studying The Wall Street Journal to explain her 10,000 percent profit in 1979 commodity trading? We now know that was a lie told to turn aside accusations that as the Governor’s wife she profited corruptly, her account being run by a lawyer for state poultry interests through a disreputable broker.

She lied for good reason: To admit otherwise would be to confess taking, and paying taxes on, what some think amounted to a $100,000 bribe.

2. The abuse of Presidential power known as Travelgate elicited another series of lies. She induced a White House lawyer to assert flatly to investigators that Mrs. Clinton did not order the firing of White House travel aides, who were then harassed by the F.B.I. and Justice Department to justify patronage replacement by Mrs. Clinton’s cronies.

Now we know, from a memo long concealed from investigators, that there would be “hell to pay” if the furious First Lady’s desires were scorned. The career of the lawyer who transmitted Hillary’s lie to authorities is now in jeopardy. Again, she lied with good reason: to avoid being identified as a vindictive political power player who used the F.B.I. to ruin the lives of people standing in the way of juicy patronage.

3. In the aftermath of the apparent suicide of her former partner and closest confidant, White House Deputy Counsel Vincent Foster, she ordered the overturn of an agreement to allow the Justice Department to examine the files in the dead man’s office. Her closest friends and aides, under oath, have been blatantly disremembering this likely obstruction of justice, and may have to pay for supporting Hillary’s lie with jail terms.

In a recent Quinnipiac poll voters were asked to describe Hillary Clinton in a single word and the word they chose was “liar.” There were others, of course:

Of 1,563 voters surveyed by Quinnipiac University, 178 said “liar” was the first thing that popped into their heads in association with Clinton — followed by 123 who chose “dishonest” and 93 who said “untrustworthy.”

Even the loathsome Linda Stasi of the New York Daily News nailed Hillary:

Question: Is it worse for a news anchor to lie about being forced down by enemy fire in Iraq than it is for a perennial presidential candidate to lie about ducking sniper fire — with her young daughter, yet — in Bosnia?

Both are horrible, but it’s worse for Hillary Clinton, who expects to run the country, to lie about something like this than it is for a blow-dried TV anchor to lie.

The fact that Brian Williams and Clinton (inset with daughter) thought they’d get away with their outrageous war stories despite there being living, breathing witnesses, video and now social media, is bizarrely disturbing. The hubris of the famous in believing that they can get away with lying forever because they are above it all never fails to astound. And never fails to happen.

Via Legal Insurrection a useful video:

Lists of Hillary Clinton lies can be found here and here.

She wanted to join the Marines.

She wanted to be an Astronaut.

Clinton has claimed that she got a letter from NASA Public Affairs that stated that the space agency was not taking women astronauts, a slap in the face of her girlhood ambitions to be an astronaut. Oberg, having researched the matter thoroughly, cannot find a copy of the letter or even an example of such a letter, which is to say that females need not apply.

But now she has sunk to a new low. She is accusing the families of the Benghazi dead of being liars.

Liar, liar, pantsuit on fire: Hillary Clinton still insists she didn’t tell the grieving families of the Benghazi victims that an anti-Islam video was to blame.

Yet family members say she said just that, three days after the attack, at the Sept. 14, 2012, ceremony at Andrews Air Force Base.

George Stephanopoulos asked her Sunday if she’d told the victims it was about the film. Clinton gave a flat “no.”

She added: “I said very clearly there had been a terrorist group, uh, that had taken responsibility on Facebook, um . . .”

Sean Smith’s mother said Hillary is “absolutely lying . . . She said it was because of the video.” Smith’s uncle backs her up.

Glen Doherty’s sister agreed: “When I think back now to that day and what she knew, it shows me a lot about her character that she would choose in that moment to basically perpetuate what she knew was untrue.”

It’s one thing to claim that at the age of six you were named after Sir Edmund Hillary. It’s quite another to call the grieving families of the dead liars.

Perhaps it’s no surprise coming from someone who sleeps through meetings, is often confused, can’t remember how many devices is more than one, and has suffered brain damage. She’s absolutely a liar. The question is, does she even understand that?

I told you it would be a problem.

Login
wpDiscuz
70
0
Would love your thoughts, please comment.x
()
x
| Reply
‹ Back to Categories