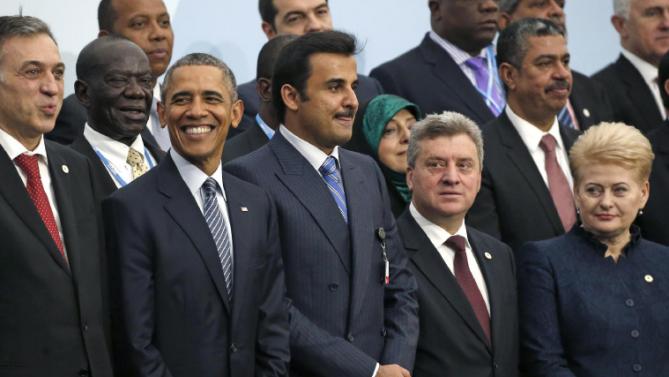 Prince Charles has kicked off the global warming summit in Paris. As is always the case with liberals, Charles is preaching of combatting climate change via the use of other people’s money. He has not committed the wealth of the crown to the effort.

One look at the above image makes clear that Obama is in Paris to, as much as anything else, preen. Not surprisingly, they couldn’t get him to shut up.

The warming thing is a tool being used to bludgeon the masses into submission. The goal is redistribution of wealth, worldwide. But it’s your wealth that’s going to be redistributed, not Obama’s, not Pelosi’s, not Reid’s, not Hollande’s and not Cameron’s. And a lot of it going to go from you to the wealthiest liberals on the planet.

Have a look at who is “investing” in Obama’s new “clean energy”:

Billionaires both. Soros, who broke the Bank of England leaving millions of Brits with their homes and savings severely devalued, curiously has invested millions in coal. Among the list of organizations supported by Soros: ACORN, Apollo Alliance, National Council of La Raza, Tides Foundation, Huffington Post, Southern Poverty Law Center, Soujourners, People for the American Way, Planned Parenthood, and the National Organization for Women. The famously anti-American Soros once said “The main obstacle to a stable and just world order is the United States.”

Steyer made millions in coal and oil but now he doesn’t want you to be able to do the same.

The rest of the Breakthrough gang can be found here. These people aren’t fools. They know where the money is going, they know the plan is redistribution and their buckets are waiting for your cash.

And you wonder why the richest continue to get richer? Thank Obama. Thank democrats. Al Gore knows. He’s worth over $200 million thanks to globaloney.

The problem is the climate isn’t cooperating. The “pause” in global warming is now nearly nineteen years long. What does one do when the data doesn’t fit the narrative?

Which is what has been going on now for some time.

Two weeks ago, under the headline “How we are being tricked by flawed data on global warming”, I wrote about Paul Homewood, who, on his Notalotofpeopleknowthat blog, had checked the published temperature graphs for three weather stations in Paraguay against the temperatures that had originally been recorded. In each instance, the actual trend of 60 years of data had been dramatically reversed, so that a cooling trend was changed to one that showed a marked warming.

Homewood has now turned his attention to the weather stations across much of the Arctic, between Canada (51 degrees W) and the heart of Siberia (87 degrees E). Again, in nearly every case, the same one-way adjustments have been made, to show warming up to 1 degree C or more higher than was indicated by the data that was actually recorded. This has surprised no one more than Traust Jonsson, who was long in charge of climate research for the Iceland met office (and with whom Homewood has been in touch). Jonsson was amazed to see how the new version completely “disappears” Iceland’s “sea ice years” around 1970, when a period of extreme cooling almost devastated his country’s economy.

This is a scam. Heap on the guilt. It’s is an Alinsky tactic- the same one that was used to convince America that banks were racist and which consequently saw lending standards largely eliminated, which in turn saw loan default after loan default and in part contributed to the financial crisis. The financial crisis was a failed effort at redistribution of wealth. Global warming is the new horse to ride. Just as in the financial crisis, which saw Valerie Jarrett and Tony Rezko rake in the big bucks, the global warming scam will only further enrich Soros and Steyer all in the name of saving humanity.

It’s always about the money.

Media outlets have been pounded into submission by the left and are now as compliant for this nonsense as they were for the financial mess. You’re evil if you even question the dogma. John Effin Kerry now asserts that Climate Change is a threat to national security– even more than is ISIS. An even bigger threat than Jenjus Khan.

Fear mongering. If that doesn’t convince you this is one big pile of horsesh*t, nothing will. I suspect that responses to climate change doubters will grow even more strident over time as the evidence for doubt mounts.