Exactly what the hell has Obama been bombing for the last couple of years? 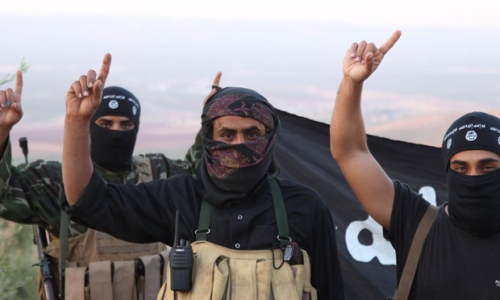 One of the very few honest things Barack Obama ever said came when he admitted he had no plan for ISIS.

President Obama is facing intense criticism for admitting Thursday “we don’t have a strategy yet” for dealing with Islamic State militants in Syria, despite warnings from top military advisers and others that the group must be confronted on that side of the border.

The president made the comment during a briefing with reporters in which he overtly played down the prospect of any imminent military action in Syria. He tried to temper speculation that he was about to roll out a “full scale” strategy, one that might expand the current, limited airstrike campaign in northern Iraq.

Initially he pledged to destroy ISIS, but then did what he does so very well- he backed down:

For a U.S. president to threaten to “destroy” a group that has ruthlessly executed two American journalists and murdered scores of people inside Iraq andSyria is not surprising. After the first journalist was murdered two weeks ago, the president likened them to a “cancer” that needed to be extracted so it does not spread. But when he was pressed over whether he really intended to destroy the group, or merely contain them, he backed off of the term.

“Our objective is to make sure that [ISIS] is not an ongoing threat to the region,” the president said. The group needs to be “degraded to the point where it is no longer the kind of factor that we’ve seen it being over the last several months,” Mr. Obama elaborated, in one particularly circuitous explanation.

Obama has overseen the decline of the American Presidency. He’s fallen to #3 in the world leadership rankings- behind Putin and now Hollande.

Which begs the question- if there are this many ISIS targets available, what the hell has Obama been doing for the last year? Exactly what is he bombing? What is the strategy?

The other day Obama ordered the bombing of truck convoys carrying crude oil in Syria, but prior to the attack dropped leaflets warning of the impending bombing so ISIS members could seek safety in advance. He didn’t want to hurt any ISIS personnel.

The French and the Russians have located no shortage of ISIS targets in 48 hours. What the hell has Obama been doing for the last two years? Why wasn’t he bombing their training camps and their munitions dumps?

Whose side is he on?

We are being lied to, and on a huge scale.