The Benghazi hearings are political? So was the lie! 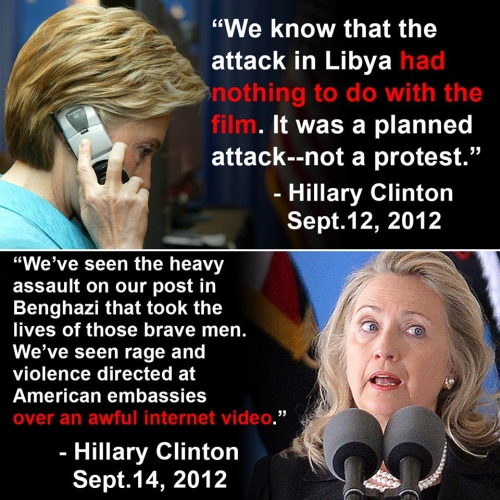 Much was made of Kevin McCarthy’s apparent admission that the Benghazi hearings were entirely political.  To be honest, it was really stupid. Mike Huckabee:

“For many of us, it’s been incredibly frustrating to watch this investigation be turned into a political football,” Huckabee said, knocking liberals for their assertion that the committee was designed to take down Clinton, and slamming McCarthy for his “unforced error that handed that talking point to the Democrats on a silver platter.”

Trey Gowdy has gone far out of his way to avoid allowing the hearings to become political but there was no way democrats were going to permit that.

So let’s have at it.

If we are to understand what happened at Benghazi, nothing has been accomplished. More security was requested and was denied. There was essentially no security that night at Benghazi. We still don’t know why. We still don’t know Stevens was in Benghazi (At least, not officially. Realistically, Stevens was there trying to procure the arms Obama set free in Libya when Obama toppled Gaddafi and send them to Syria. Why else would there be a CIA annex in Benghazi?).

The attacks in Benghazi came on September 11, 2012, only weeks before the 2012 election. Cue Ben Rhodes:

Rhodes outlined a number of talking points for Rice, with the advice “to underscore that these protests are rooted in an Internet video, and not a broader failure of policy.”

Let’s lie to the American people! Let’s bamboozle them with a video and distract them from the gross “failure of policy.”

What was it Obama wanted deflected?

The attack on Benghazi came at the hands of Ansar Al-Sharia, an Al Qaeda affiliate. As of November 1, 2012, Obama had decared Al Qaeda “decimated” 32 times.

Obama said Oct. 23 at Lynn University in Boca Raton, Fla., “al Qaeda’s core leadership has been decimated.” He repeated the same line at a campaign event in Delray Beach, Fla. that day.

That day in Dayton, Ohio, Obama said, “That’s why, working with Joe Biden and our national security team, we’ve been able to decimate al Qaeda.”

The problem for Obama was that they weren’t decimated. Likely armed with the weapons set loose by Clinton’s and Obama’s take-out of Gaddafi, the Al Qaeda affiliate was able to kill four Americans that night.

Obama and Clinton stood on the caskets of the dead as they blamed the video. Obama went to the UN and pinned the blame for the attacks on the video six times. The video narrative began with Clinton.

More and more, it looks like Libya was all about the money. Obama toppled the government of a sovereign nation. Hillary wanted Libya toppled because Qatar wanted Gaddafi toppled. Why?

Although it is often reported that the William J. Clinton Foundation was founded in 2001, contributions from foreign governments to the have been given since its inception in 1996. Prior to the nomination of Hillary Clinton to Secretary of State, the Foundation had raised at least $46 million from Saudi Arabia and other foreign governments. Saudi Arabia gave $10-25 million to finance ClintonÕs library in Little Rock, Ark., and charitable efforts to reduce poverty and treat AIDS. Qatar was included among other major foreign governments that donated to the effort. And as widely reported now, the Bill, Hillary & Chelsea Clinton Foundation broke its December 2008 agreement with Obama to stop accepting contributions from foreign countries. Turns out the Foundation continued to receive millions of dollars from several governments, including Qatar. Reportedly, in 2014 a Qatari government committee gave the Foundation between $250,000 and $500,000. Previously, QatarÕs government had donated between $1 million and $5 million to the Foundation. Was that all?

It was all political. Even if the Benghazi hearings were political in nature, so what? They are a proper avenue for scrutiny of one of the most politically and financially motivated deceptions of all time. We’re not going to see the truth emerge until the so-called “fourth estate” asks why Obama, Clinton and Rice lied and continued to lie. The dismissal of this deception is not acceptable.