Subpoena Barack Obama to testify in the Benghazi hearings 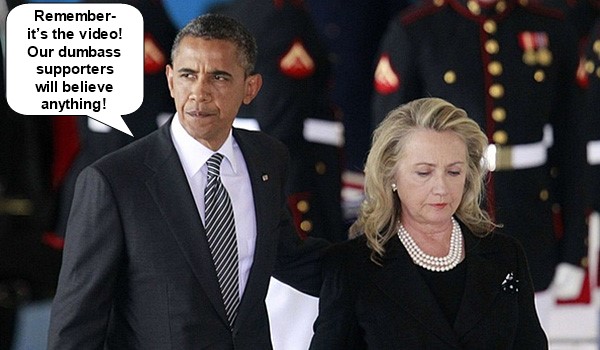 There is a great deal of focus on the Benghazi hearings and rightfully so, but there’s something missing. There’s actually a larger issue that’s flying under the radar and really demands an answer.

Obama lied. Over and over and over. Two weeks after the attacks, Obama went to the UN and blamed the video six times. Six times.

Susan Rice, on of obama’s useful idiots, went out to the Sunday morning talk shows to spread the lie. Ben Rhodes gave her the order.

Rhodes outlined a number of talking points for Rice, with the advice “to underscore that these protests are rooted in an Internet video, and not a broader failure of policy.”

Hillary Clinton lied. She and Obama took turns lying to America and the families of dead.

Families of the dead call her a “serial liar.” Patricia Smith, mother of Sean Smith, said “My son told me the night before that he has been asking for security and he hasn’t heard anything.”

The question is- why?

They all knew it wasn’t the video. Is it clear they all lied?

Why did they lie?

It’s rhetorical, of course. We know why.

Obama had trumpeted that Al Qaeda was all but defeated and the war on terror was over. An election was coming and the truth could upend it. The media has shown no inclination to get to the bottom of this, to find out why this wretched regime lied through its teeth.

That Barack Obama is a liar is nothing new. Why anyone believes anything he has to say is one of life’s enduring mysteries. But we deserve to know why he and his minions lied. We deserve to hear out loud the motivation for this outrageous mendacity.

In response to an ABC reporter in October 2012 Obama said:

“…the minute I found out what was happening, I gave three very clear directives. Number one, make sure that we are securing our personnel and doing whatever we need to. Number two, we’re going to investigate exactly what happened so that it doesn’t happen again. Number three, find out who did this so we can bring them to justice.”

So, Mr. Obama, which minute exactly was it? What exactly was done to “secure our personnel”? And whatever in the hell did you mean by “doing whatever we need to”? To whom did you give those “very clear directives” to? Did they carry out your orders? If not, why not?

Obama, to my knowledge, has never made any more statements about what he did or didn’t do that night. His gutsiest move was probably to go to bed early to rest up for his Vegas fundraiser the next day.

It’s rhetorical, of course. We know why.

Obama had trumpeted that Al Qaeda was all but defeated and the war on terror was over. An election was coming and the truth could upend it.

All thorough his re-election campaign Obama conflated ”al Qaeda” with the entirety of the ”war on terror.”
But, rather than defeat al Qaeda, Obama sought to include al Qaeda as an ally.
It was the Februrary 27 Brigade that Obama/Hillary hired to guard the Benghazi compound.
BUT the February 27th Brigade was and is an al Qaeda organization.
It’s leaders pledged fealty to al Qaeda’s leader.
Its actions mirror al Qaeda’s only in Libya instead of Afghanistan/Iraq.
So, why did Hillary think for one second that our Ambassador would be safe if she surrounded him with enemy combatants?
Sean Smith had been a gamer.
He commented on his favorite gaming site that very evening that he didn’t think they would survive the night, that the compound’s paid security was casing the place and photographing it then texting those photos to others.
Sean had a keen eye.
He died a hero.

Republicans had better quit while they’re ahead—-which is to say, somewhere short of having any remaining credibility totally obliterated.

@Greg:
So why did they lie? Do you think it’s ill-advised to inquire into why a government lies so blatantly?

The problem, as I see it, is there are so many uninformed folks out there ready to buy the leftist lie that this just “politics”, combined with an unwillingness by the republicans to go for the jugular. People have been convicted of much less serious violatios of.national.security than Hillary has committed, yet she is still the marxist frontrunner for.her party’s nomination.

Without something the general public can understand analagous to semen on Lewinski’s dress, leftist drones like Greg will keep up their false sanctimony, and a subpoena of Obama to be questioned on his blatant politically expedient lies will come to naught.

@Greg: when are you going to get your head out of the sand?

Why bother? He wouldn’t tell the truth.