A Tale of Two Embassies – Japan Vs. Venezuela 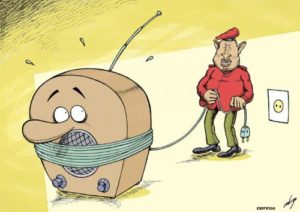 Hola amigos – been a while since I’ve blogged at ya, but things have been pretty crazy here in Bobville lately.1 So I wanted to get back in the swing of things with a quick hit for everyone this morning.

Back in my days of volunteering as a tour guide for the local youth hostel I would sometimes run a program other than my usual monument/memorials walking tour. Every year there’s an event called Passport DC, where various international events are held, the most interesting being when the embassies have an annual open house. One Saturday is dedicated to European Union member countries, while another is dedicated to non-EU nations. I always enjoyed these, and it was interesting to see how they varied. Some just had an open door, a few brochures in an uncomfortable lobby with a bored looking diplomat, while others would put on a massive show – generally the bigger the country the more impressive (Australia, UK, Germany & France were consistently impressive), although there were some hidden gems, too. Everyone would always be surprised when I’d tell them that the one to absolutely not miss is Botswana.2

Since passing the torch and my tour guide days being behind me as my Saturdays are spent being a father to Little Bob, I generally get called on annually to offer some advice for the volunteer handling each of the two tours. While I’d e-mail a few tips, it was always too time consuming to give a massive knowledge dump. So for the non-EU tour this year I was able to come out and join the group for the first hour & pass along my institutional knowledge to the guide. Upon arrival at DuPont Circle I immediately kept us walking past the Indonesian embassy. It’s an impressive sight from the outside, but they never show much inside, and because of this its lines move quickly – perfect for peak times when every embassy has a long line. I wound up only getting to see two embassies, and it was interesting to note the differences between the two.

On my recommendation, our first stop was Venezuela. In past years their lines became long and slow quickly, and they always had a good setup – plenty of free food and drink in the courtyard out back. We were greeted with friendly embassy staffers, and inside they had various propaganda pamphlets at a table set near what I remember as being around a 12′ X 12’somewhat creepy Hugo Chavez memorial painted on one wall. Out back in the courtyard were tents with food, drinks, and a table filled with various propaganda books and pamphlets, all free to take. To sum them up, they were filled with themes of various anti-Americanism that would put them slightly to the left of Bernie Sanders. They also touted how great life in Venezuela was, and how they were no threat to the US and that our country was trying to sabotage them. The feel of it all was them repeatedly trying to convince every visitor how great life in Venezuela is.

After departing their embassy we crossed the street to visit the embassy of Japan. Theirs is another big draw and the line was already growing. We first passed through the gates and into a line that wound around the edge of the yard in front  of the embassy. In the middle of the grass was a young embassy staffer with a massive inflatable bottle of Kikoman strapped to her back. She was doing some cartwheels and other moves, and was eventually relieved by another staffer – I’m guessing Kikoman has some part in helping with the embassy’s expenses, or at least for this one event.

When we got inside there was display after display of some really interesting technological advances that Japanese companies had made. There was a huge microscope with a TV screen attached that showed a massive closeup of the legs of a water bug they took from the yard and now had under the lens (thankfully PETA did not hear of this). There were displays dedicated to rockets, bullet trains, robotics… you get the idea. And of course, they had some young women in the traditional ethnic garb and lines for food toward the end. What’s interesting is what they didn’t have – while there was some touristy promotion for Japan, there wasn’t any effort to beat us over the head to tell us how great Japan was – all that they needed was to show us what their people were able to do when left with the freedom to do it and we could decide for ourselves.

Contrary to what the embassy staff would have us believe, Venezuela is no paradise these days – Chavez’s policies performed the miracle of transforming an oil rich country into an economic basket case. Price controls have led to predictable shortages, leading the state to order farmers to hand over produce to state stores.

In any country criminals will look to steal the most valuable items available – jewelry, high tech, etc. So as we say in New Jersey what’s “falling off the back of a truck” In Venezuela? Food.

Like any good leftists, opposing voices must be shouted down and destroyed. The opposition leader has been imprisoned, and unfriendly media has been silenced.

Things have gotten so bad that Venezuela has even managed to create shortages of…  toilet paper? Yes, toilet paper.

And for all that the left rails about income inequality (as if somehow Cuba or North Korea are models we should emulate), Venezuela serves as a shining example of how that works in practice? One need only look at who one of the wealthiest  billionaires in the country is.

At the end of the day the two embassies are perfect examples of conservative free market principles versus the top down central planning that leftists cherish. Just as Japan only has to point out what its citizens are capable of to make itself looks good, Venezuela has to practically plead to convince us that oppressing their citizens works.

Similarly, free markets have given us iPhones and Uber. Nobody who’s used either had to be told that these things are great – the people who chose to buy them already know that. On the flip side, look how hard and how many ways the radical left tries to tell us that Obamacare is great. If it really was, they wouldn’t have to.

Both conservatives and leftists have learned from Venezuela, but the lessons are very different. Conservatives see Venezuela as a warning, while the radical left views it as a blueprint.

1 I’ve used this opening line a few times before when I’ve been away from blogging for some time. For those of you unfamiliar it’s paying homage to that old great columnist at The Onion, Jim Anchower

2 If you’re wondering they consistently had four things that make for a good embassy visit:
1) Short lines – this is huge, especially in the early afternoon hours when crowds are at their peak
2) Some interesting exhibits with enthusiastic presenters
3) Good swag – I still have the free t-shirts I’ve gotten on various years
4) Free food – Excellent hot lunch upstairs, which is a big plus for hostellers travelling on a budget