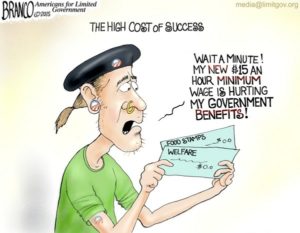 It’s been a while since I’ve written about Leftist Minimum wage Chickenhawks, but that doesn’t mean that lefties have stopped being hypocrites on the subject! In honor of the labor Day holiday weekend, this seems like a great time to call out some of the bigger names. Since it’s been a while not all of these stories are new, but as they say, the beat goes on, the beat goes on…

Los Angeles passed a minimum wage law, and you’ll never guess the evil, greedy entity who wants no part of it, via the LA Times:

The path toward passage of Los Angeles’ landmark minimum wage increase took a rocky detour Wednesday, as business and elected officials reacted harshly to a last-minute push by labor leaders to create an exemption for companies with unionized workforces.

Union officials have been among the most ardent backers of the plan approved by the L.A. City Council last week to raise the minimum wage to $15 an hour. But some labor leaders who opposed loopholes for small businesses and restaurants now argue that unionized companies should have leeway to negotiate lower pay rates with their employees.

And as PJ Media’s Stephen Kruiser pointed out in his analysis of this story,

This is akin to the climate doomsayers flying all over the planet screaming about the dangers of fossil fuels. And it is most reminiscent of the great fight Big Labor fought for the passage of Obamacare, from which they immediately sought exemptions

How about that outspoken champion of the Workers of the World, Bernie Sanders? Not so much. As Soopermexican at The Right Scoop found:

Included in the 62 million workers making under $15 hour are members of Bernie Sanders’ own staff. According to the senators’ website, Interns are paid only $12 an hour.

In [Bernie’s] bill’s summary, the first bullet point reads, “No one working full time should be in poverty. It is time to pay workers a living wage of at least $15 an hour.”

Apparently, though, Bernie Sanders’ interns are excluded from that assessment.

Meanwhile, NRO’s Katherine Timpf shows us another leftist group that doesn’t seem to practice what they preach.

The advocacy group Working America posted a job listing on Facebook looking for grassroots organizers willing to start campaigns pushing for a $15 minimum wage — for $12.25 per hour.

Here is a screen grab of their exchange:

And those adorable girls from that awful 90s sitcom “Full House” have blossomed into powerful fashion moguls, powerful enough to be hobknobbing with some geriatric presidential candidate who has difficulty with modern technology:

Mary Kate and Ashley Olsen have built a billion-dollar fashion and entertainment empire since their days as child stars — but they haven’t shared enough of their dough with the little people who grease the wheels of their business, a lawsuit claims.

The class-action suit, which alleges wage theft, says the 29-year-old celebs failed to pay about 40 past and present interns who have worked for them.
The lead plaintiff in the Manhattan Supreme Court case is former design intern Shahista Lalani, who says she was treated poorly, toiling for free doing menial tasks at the twins’ Dualstar Entertainment Group in 2012.

The Parsons School of Design grad worked in Manhattan under the head technical designer for the Olsens’ fashion label, The Row, for five months.
“She was very demanding,” Lalani recalled. “I was doing the work of three interns. I was talking to her all day, all night. E-mails at nighttime for the next day, like 10 p.m. at night.”

Lalani claims she was hospitalized for dehydration because of the job’s demands.

“It was like 100 degrees outside. I’d just be sweating to death. I probably carried like 50 pounds worth of trench coats,” to Row factories, she said.

Remember friends and neighbors, whenever a leftist preaches about helping entry level workers, hold onto your wallet – it won’t be their own that they reach into for cash.

I wonder where government gets the idea it can set a minimum wage at all. One would think that wages would be a matter between individuals, and that the only role government would have would be enforcement of contracts.

Ah yes, bernie the self-proclaimed socialist that stated in a speech a while ago that he was going to fundamentally change the United States. (yes he used those exact words) Didn’t another marxist/socialist say the same thing and that is the reason our country is in such dire straits?