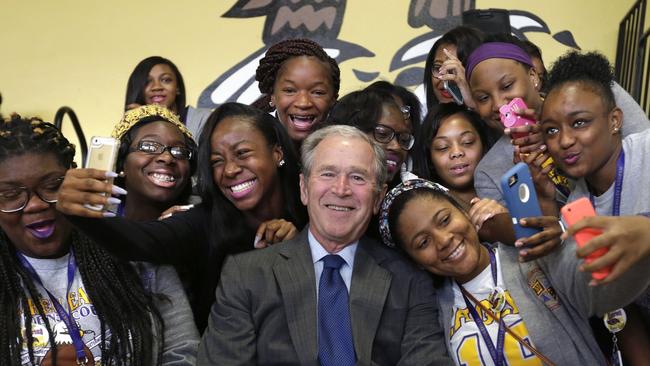 In honor of celebrating the anniversary of Hurricane Katrina and to further perpetuate and promote the current Black Lives Matter Movement, Maxwell Strachan of HuffPo reflects upon the romanticized remembrance of Kanye’s finest hour, 10 years ago (in a piece entitled “The Definitive History Of ‘George Bush Doesn’t Care About Black People’.

“George Bush doesn’t care about black people,” West said. The camera had not cut away in time. Millions of Americans heard his words. A somewhat shaken West walked off stage, leaving actor Chris Tucker to try to follow that and Myers to come to terms with what had just happened.

“He just seemed not appalled but almost flabbergasted,” Radice recalls of Myers. “I’ve always thought Mike might have felt that he got sandbagged,” Radice added.

“Myers looked like he had been shot in the head,” Kaplan said.

Several members of the production team remember Myers turning to whoever would listen off-stage and shouting, “Well, that went well!” (Myers declined to comment for this story.)

The producers were trying to figure out what to think, too. “Everybody kind of went, ‘OK …’ like somebody had just dropped a stinking turd on the stage, and we all kind of backed off and let it sit there for a while and moved on to other things and hoped that nobody really noticed,” Traub remembers now.

One producer, who requested anonymity, told HuffPost he had warned his colleagues before the telecast that West was known for “making everything about himself.”

Afterward, some producers worried West had done just that. “People were not happy,” Traub said. “We had worked our asses off on this,” said Frank Fernandez, an associate producer for the show. “We didn’t even talk about titles. In the credits, that’s when we found out what the titles were.”

“I was feeling kind of crestfallen when I walked out,” Kaplan admits now. “We had worked so hard. The last 72 hours was like no sleep and all work.”

Not everyone was feeling down, though. Before West could leave 30 Rock, Sean “Diddy” Combs, who was present at the telethon but did not appear on air, told West that he would have done the same thing, according to a producer with firsthand knowledge of the interaction. (Diddy declined to comment.)

Harry Connick Jr. went further. The singer and actor, a New Orleans native, had been instrumental in the show’s success, gathering musicians together to figure out last-minute arrangements. After West’s comments, Connick, along with country singers and couple Faith Hill and Tim McGraw, walked up to Kaplan and told him something the producer would never forget: that West’s comments wouldn’t ruin the show’s legacy but would ensure it had one — that West’s comments were important and correct.

“The three of them took me aside privately and said, ‘[We] know you’re probably upset by what Kanye said, but we’ve all been down there and we promise you that when the dust settles and what Kanye said is thought about and what people learn is learned about, [we] promise you’re going to be proud that Kanye ended up saying that on the show,'” Kaplan remembers. “They said, ‘We were down there, and [we’re] telling you it’s not good what the government’s doing there. They’re not being good. They’re not acting properly.'”

“It floored me,” he said. “In the end, Faith and Harry and Tim made my night.”

NBC’s head honchos did not share Kaplan’s sense of relief. Without alerting the show’s top producers, the network decided to cut West’s remarks from a tape of the telethon set to air three hours later on the West Coast. In a tersely worded statement, the network distanced itself from West, stating that “his opinions in no way represent the views of the networks.”

YouTube, which had launched earlier that year, allowed users, many of them young people, to upload, watch, share and discuss the video — and draw their own conclusions. In a recent essay for The Nation, writer Mychal Denzel Smith described West’s comments as the “first relatable expression of black rage on a national stage” for a generation of black men and women.

“‘George Bush doesn’t care about black people’ was my first political memory,” Julia Craven, now a 22-year-old staff reporter for The Huffington Post, wrote in an email. “I didn’t really understand the nuances behind what Kanye meant by that, but I knew that historically white people didn’t care about black people (mostly because I’m from the south). So it made sense. It was funny more than anything else, though. It never crossed my mind that that was the beginning of Kanye’s politicizing or that we’d look back on Katrina and really understand how spot on that critique was. But I was 12.”

“I remember driving home one night and seeing a line of, I kid you not, about 10,000 people that were just getting off the buses from Katrina. … You could smell all they had gone through for miles in the air. You could smell it,” he said. “[Katrina victims] didn’t have the dollars to wield to influence a Bush or to influence even their local politicians to move in the way that a Kanye West could get them to move.”

“Hearing Kanye West say what he said in 2005 — a lot of us as young people felt empowered,” Lawrence said. “West in many ways became a champion for us by speaking out nationally in that way.”

Just days after the telethon, a Houston-based hip-hop duo called The Legendary KO released a song titled “George Bush Doesn’t Care About Black People,” which quickly racked up more than a half-million downloads. (Watch it below.) Damien Randle, one half of the duo, was 31 at the time. “I stood on my couch that evening because I knew that the world would finally hear how others had felt, and it was too late to censor it,” he recalls.

Gloria Browne-Marshall, an associate professor of constitutional law at John Jay College in New York City who teaches a class on race and the law, remembers her shock at hearing about the conditions in which New Orleans’ black community lived even before Katrina.

“The [conditions] that black people were living in, especially in the Ninth Ward — it was deplorable that this was taking place within this country, that they were living so poorly in the first place. And then [once Katrina hit], to see them stranded and being abandoned, treated [as] and called refugees in our own country …,” she trailed off. “I’m not saying Kanye was a hero because he said it. But because he was a celebrity and he had the floor and he said it in a moment where the nation was not really voicing that opinion, I thought it was very significant.”

Some New Orleanians found truth in West’s comments, too.

“Let me tell you something, the man told the truth,” said Glen David Andrews, a prominent trombonist and a fixture in the New Orleans music scene. “We thought he said the right thing. I just wish he slapped the president, too. It’s fucking true. It’s fucking true, isn’t it?”

Today, it’s not clear whether West himself would repeat what he said 10 years ago. After all, he is more careful now and even apologized to Bush in a 2010 interview on NBC’s “Today” show, saying that he “didn’t have the grounds to call him a racist.”

“He has become more media savvy, very media conscious and deliberate in his appearances and in the things he chooses to express at certain points,” Heath, the professor who teaches the course on West, said. “Ten years later, I wonder if even Kanye West would do the same thing, say the same thing. But I think he might.”

Many of the people involved in the benefit concert now recall West’s comments positively. Myers told GQ last year that he was “very proud to have been next to him.” Radice called West’s comments “a phenomenal moment in culture, in history.” Traub, while still perturbed by West’s decision to point the finger so strongly at Bush, agreed that “there was definitely a tremendous problem with the way that African-Americans were treated in that area.”

Kaplan, who was so crestfallen moments after West’s remarks, now looks back on his decision to stray from the script especially fondly.

“When you look at it in hindsight, boy am I glad he did that,” Kaplan said. “[‘A Concert for Hurricane Relief’] became politically correct [as a result of West’s comments]. And I don’t mean political correctness. It just became accurate. It became an accurate program, not just a fundraiser.”

The former president made his own visit down to New Orleans recently:

Ten years ago, the idea that President George W Bush would receive several standing ovations in front of a predominantly African-American audience in New Orleans, might have been unimaginable.

But as he set foot in the Warren Easton Charter school, which had been badly flooded in the aftermath of Hurricane Katrina, all the anger appeared to have been filed to the back of people’s minds.

Mr Bush was relaxed as he mingled with students in the school gym. He cracked self deprecating jokes as he delivered a speech in the main auditorium. This was a man who was fixed firmly on the future – hailing the city’s efforts to improve education post Katrina. Most of the students in the audience were too young to remember Katrina vividly – one 16 year old said his parents didn’t like Mr Bush, but he himself felt the president’s speech was inspirational.

Outside I saw four protesters holding signs – “George Bush still hates black people,” read one. For many in this city, the painful memory of Katrina will always be associated with America’s 43rd president, but others no longer see it that way.

What more can I comment on? Silly idiots“>My definitive history on Bush cares about black people.

That about sums up all I want to say on this topic. Long on blockquote. Short on commentary.

Now, if anyone wants to criticize Bush 43’s dancing skills….ya got me on that one. I have no defense. And no further comment on that one, either. 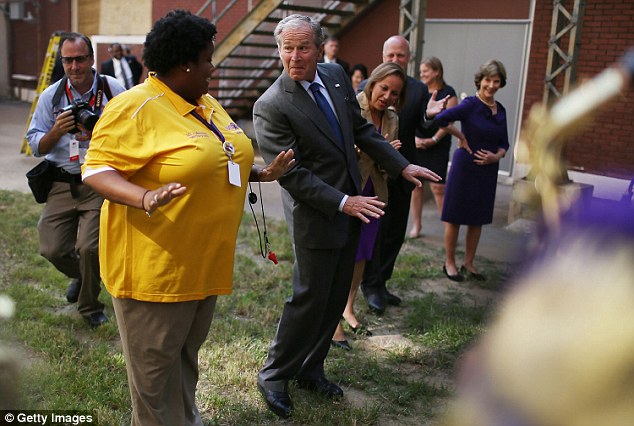