Hillary’s email caper: She had inside help 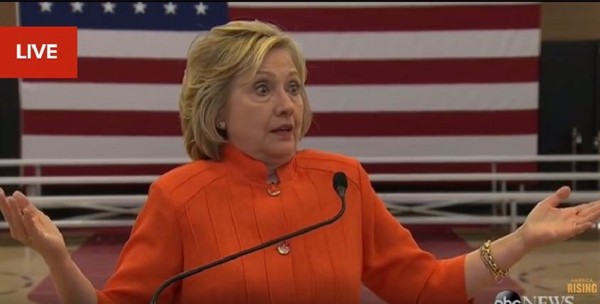 If the following is accurate, someone besides Hillary is in really deep sh*t. Former State Department officials have called Hillary Clinton email assertions “total BS.”

Former State Department security officials don’t buy Hillary Clinton’s latest alibi that she couldn’t tell that government e-mails — which she improperly, if not illegally, kept for several years on an unsecured home server — contained top-secret information because they lacked official markings and weren’t classified until later.

Such messages contain sensitive “keywords” distinguishing them from unclassified information, even if the material didn’t bear a classified heading as she claims.

The secretary would have known better, the department ­officials say, because she was trained to understand the difference when she was “read in” on procedures to ID and handle classified information by diplomatic-security officials in 2009.

Clinton also went through a so-called “read-off” when she left ­office in 2013. In that debriefing, security officials reminded her of her duty to return all classified documents, including ones in which the classification status is “uncertain,” which would have included the e-mails stored on her private server — which she only this month turned over to authorities. The read-off would have included her signing a nondisclosure agreement.

Courtesy of the Washington Free Beacon, here is a montage of how Hillary Clinton’s email mendacity evolved.

U.S. Intelligence Community Inspector General Charles McCullough reported to Congress on Wednesday that the sensitive information dated from 2006 and 2008, and was ‘classified up to “TO.PSECRET//SI/TK//NOFORN”.’

The last three designations refer to ‘Special Intelligence,’ ‘Talent Keyhole’ – a kind of satellite – and a prohibition on any non-Americans seeing the information.

She is supposed to know when something is “classified.” Her latest defense is that she’s an idiot who can’t recognize sensitive information. The million dollar question is “How did that information get onto her server?” It’s not a small thing. It’s everything.

A member of my family sent me a link to a segment of the Michael Savage show. You do want to listen to it:

The satellite imagery data had to originate at the Department of Defense. It ended up on Clinton’s server. According to the callers on the audio the DoD intranet is NOT connected with the outside world. Security measures exist to prevent that from being a possibility. In order for Hillary for come into possession of this kind of data on her own homemade server someone would have had to download the information, place it on a device (like a thumb drive or SD card), take the device or card out of the SCIF , upload the information to a conventional server, PC or smartphone, strip off the classified labels and then email it to Hillary Clinton’s private server. It’s called spillage.

All of this is HIGHLY illegal.

If all this is accurate, Hillary had someone on the inside who knew what they were doing and knew it was wrong.

If all this is accurate, we’re going to hit 9 on the Richter scale.

Adding to the mystery- the State Department made no effort to secure Clinton’s server after it was hacked in 2013.