I Still Stand by the $72,000 Minimum Wage Experiment, And So Should You 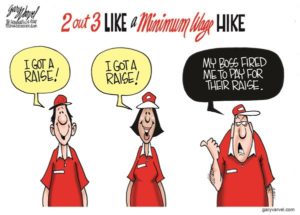 This story actually broke last week, and since I was among those singing its praises a few months ago I would be remiss to not follow up. I stood right alongside all of the lefties in praising Dan Price, CEO of Gravity Payments, for increasing his company’s minimum wage to $70,000 per year, although for different reasons. You can guess the reasons why Price became a darling of the left, but I was looking at this differently:

I don’t agree with everything in this article, and I’m not sure if this is the smartest way to run his business, but at the end of the day it’s his business to run. If this is how he chooses to do so then good for him. Instead of getting up on his high horse and preaching how others should act Price is taking responsibility and making it happen himself. And good for him.

Now a few months later the smoke has cleared and the results have been quite predictable. Kim Quaid at the Victory Girls Blog summed it up:

On the business side, some of Gravity’s clients left, convinced they would be facing rate increases to their companies. New clients flooded into Gravity, forcing Price to hire a dozen more employees at the promised higher salary. Moreover, those new accounts won’t begin paying off for another year.

And then there were Gravity’s disgruntled employees.

Grant Moran, Gravity’s web designer, left after his salary was bumped from $41,000 to $50,000 in the first phase of raises. Sounds like a very decent raise, but Moran found that less-motivated people were doing mediocre work and earning the same salary. “Now the people who were just clocking in and out were making the same as me. It shackles high performers to less motivated team members.”

Financial manager Maisey McMaster also left. Originally enthused about Price’s vision, she eventually found that Price “. . .gave raises to people who have the least skills and are the least equipped to do the job, and the ones who were taking on the most didn’t get much of a bump.” When she approached Price with her concerns, he became indignant. “He treated me as if I was being selfish and only thinking about myself. That really hurt me. I was talking about not only me, but about everyone in my position.”

Even worse, Dan Price is being sued by his older brother Lucas, Gravity’s co-founder who owns about 30% of the company. Lucas Price filed a lawsuit two weeks after the pay hike announcement, accusing Dan of taking large amounts of money from the company while denying him his benefits of ownership. “Dan has taken millions of dollars out of the company for himself while denying me the benefits of the ownership of my shares, and otherwise favoring his own interests as the majority shareholder over my interests,” he wrote in an email to the New York Times.

Because Dan Price has shifted his short-term profits to increased salaries, he has little money to buy out his brother, much less pay his legal bills or improve his company. Should Gravity fold, there will be 120 employees who will be forced to find new employment, most likely at lower salary levels than they enjoyed under Dan Price. Some may have bought homes, or new cars, or maybe even gotten married and started families — all reliant upon the high salaries paid them through Dan Price’s misguided notions.

And after all of this, I still support Price’s decision. Don’t get me wrong, the idea itself was a bad one, and I’m not the slightest bit surprised at what happened when Price tried to be smarter than the invisible hand of the free market. So why do I still support Price? Back to my previous post, it’s Price’s company and it is his business how he chooses to run it. Now the one part of this I do have an issue with is his not working closer with or buying out his brother beforehand. Even if they weren’t family Price should have shown more respect for a 30% stakeholder who helped to found the company – this is going to make for one awkward Thanksgiving dinner this year! But do you know what else Price failed to do?

He didn’t push any politicians to pass laws to force his competitors to also raise their minimum wage.

He didn’t make any “donations” to Organizing for America, The Clinton Foundation, or any other money laundering “non-profits” in hope of scoring a massive government contract or protectionist legislation designed to freeze out any upstart competitors.

He didn’t look for a taxpayer-funded bailout to keep his dream alive.

Unfortunately the lefties who could learn the most from this episode are paying the least attention – #FightFor15! But if we conservatives can’t get behind someone who chooses to take a risk, falls flat on his face, and accepts responsibility for his decisions then what do we stand for?

Back in the 1960’s on college campuses many professors forced groups of students to work on projects as a team, for all-or-nothing credit.
It never mattered how the work product was divided up between the various group members, most of them never lifted a finger.
They knew that there would be one or more students who would do it all just to get credit for him/herself.
So, they slid by doing nothing and getting “A’s.”

This Dan Price, CEO of Gravity Payments, inadvertently is learning the same lesson.
But burnout happened faster in the real world than the classroom, where just one project was involved at a time.
Now he rents out his home and lives in a garage while his top workers flee.

In college, we quickly learned who those professors were and smart, self-motivated students avoided them.

@Nanny: That’s actually an incredibly useful exercise for students – gives an early lesson in shirking for slackers and in recognizing bad managers by the star performers!
I took one class where we were graded as a group, but one caveat was that in each of our final reports we were required to personally assess how much each student participated. Our prof mentioned that she was genuinely surprised with how honest and consistent each group’s stories were. I wonder if that still holds true today.

don’t the states and cities who have raised their minimum wages above that of the Federal minimum have LOWER unemployment than the national average? and unemployment is now down 40% since from its high of 9.5% which occured 90 days after Obama was sworn in and just after the first Congress funding was passed to stop the freefall of the economy

@Brother Bob:
Yes, it was incredibly useful throughout our lives.
But I have to wonder how Dan Price got as far as he did while oblivious to how hard SOME of his workers worked VS how some others floated through their days accomplishing little?
The Beatles song title, ”The Fool on the Hill,” comes to mind.
Hope he’s enjoying living out of his car and his garage.

@john:
No they do not they have higher unemployment and the gap between the rich and the poor is greater in areas with higher minimum wages
Also unemployment among minorities has always gone up after every minimum wage increase
Also if labor participation rates were same as when Bush was in office unemployment would be near 11% and even the Marxist Bernie Sanders recognizes that fact
Just like a Liberal to claim victory by destroying the hope of a better life for millions
in the name of fairness

@Nanny: I truly hope Price does learn from this, and I’m already rooting for him to rebound! Or to fail completely here and use his lessons learned to make his next move succeed…