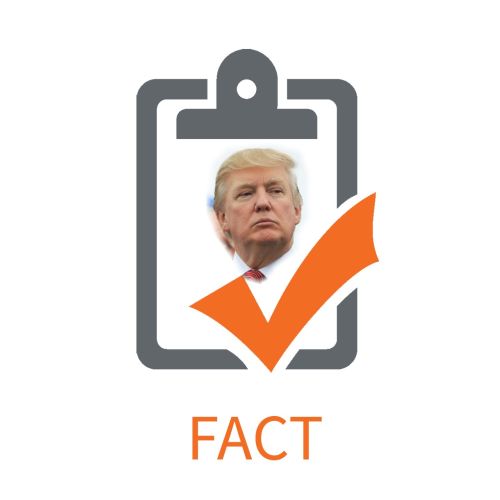 Donald Trump is under siege for comments he made opening his bid for the GOP Presidential nomination. It is appropriate that someone bother to fact check his assertions instead of just jumping on the PC bandwagon and slamming Trump as pretty much everyone- Republicans included– has done. So let’s see what Trump really said:

The U.S. has become a dumping ground for everybody else’s problems.

Everyone with half a brain knows Trump was talking about illegal immigration. The reporters at Reuters do not have half a brain.

Ever since Donald Trump made his anti-immigrant tirade during his 2016 presidential bid announcement, he’s lost partnerships with many large companies including Univision, NBC Universal and Macy’s.

It was not an “anti-immigrant” tirade. It was an anti-illegal alien invasion tirade.

When Mexico sends its people, they’re not sending their best.

How many Mexican nuclear engineers have illegally entered the country?

How many highly educated Mexican people have violated the US borders to gain entry?

How many illegal alien doctors have violated the borders to gain access to the US?

Illegal drugs flow over and under US border

“If the American public had any idea how wide open that border is out there, they’d have a heart attack,” one frustrated U.S. official said.

“Not all illegal aliens are crossing into the United States to find work. Law enforcement officials indicate that there are individuals coming across the border who are forced to leave their home countries because of criminal activities. These dangerous criminals are fleeing the law in other countries and seeking refuge in the United States.”

Majority Staff Report of the House Committee on Homeland Security

On average, more than 500,000 illegal immigrants were arrested every year during the early twenty-first century, either while they were in the United States or while they tried to cross the border. In 2007 alone, Border Patrol agents arrested more than 850,000 people attempting to enter the country illegally. Because the federal government estimates that only 10-20 percent of all illegal immigrants are apprehended, as many as 4 million undocumented immigrants may enter the country undetected every year. Federal officials have also estimated that nearly 80-90 percent of illegal drugs entering the United States come from Mexico. Most of these drugs are smuggled in by illegal immigrants.

According to a report released by the Department of Homeland Security’s inspector general on October 6, the presence of communicable diseases at detention facilities housing illegal immigrants — both unaccompanied children and families — remains a problem.

The findings, detailed in a memo written by DHS Inspector General John Roth to DHS Secretary Jeh Johnson, were released by Roth’s office on October 6. They summarized the findings of the Office of the Inspector General’s (OIG) investigators during five unannounced visits to three detention facilities in Texas and New Mexico between August 21 and September 26.

So in summary, illegals flooding this country are primarily unskilled, carry diseases, bring crime into this country, and are responsible for many rapes- just as Trump asserted.

We rate Trump’s assertions as true.*

Now- I don’t like Donald Trump and I don’t for a second believe he has a snowball’s chance in hell of becoming President, but he’s right about this. Ted Cruz is right when he says that Washington doesn’t want to have a discussion about illegal immigration. Not only doesn’t Washington want to have a discussion about illegal immigration, neither do liberals across the nation. They’re adamantly opposed to a legitimate discussion about illegal immigration- so much so that they need to dishonestly edit Trump’s words to make him sound as bad a possible. Liberals right now are out of control. They are mad. We’ve seen George Takei’s insane racist rant, we’ve seen liberals threaten the life of a 12 year black youth because he dared criticize Obama. They go collectively unhinged with their fascism over the Confederate flag and they’ll crowd shame (or worse) anyone who doesn’t goose step with them. It’s like a scene out of the God-awful movie The Purge, the difference being that in the movie it was just one night a year people were allowed to kill. Right now there seems no end to the bloodlust of the left. Ann Coulter can’t hold a book signing without being attacked by illegals.

We haven’t even gotten to murder yet.

Rich Lowery says Donald Trump has a point. It’s more than that. About this, Trump is right.

*- “We” means me and the not the other authors here or the owner of the blog.

But with outrage should come introspection. It’s easy for Mexicans to make Trump a target. But he simply said out loud what many Mexicans who stay behind have long believed about those who fled to the north—that they’re the undesirables who were out of options, didn’t make it, and couldn’t hack it.

Which raises the question: Are Mexican elites upset at Trump for insulting their countrymen, or for stealing their lines?