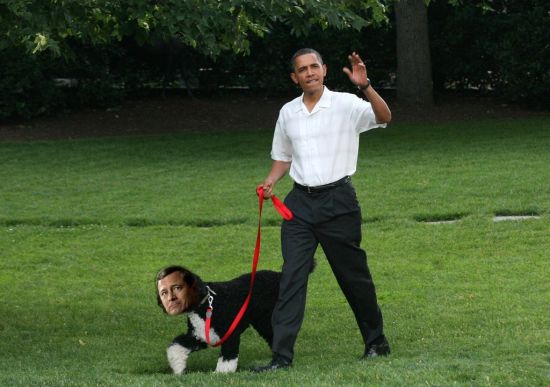 Obama takes his new dog “Roberts” out for a walk

Barack Obama has decided to run for a third term (at least) as President of the United States.

President Obama is beginning the process to amend the Constitution to allow him to run for a third term.

WWN learned that the White House and President Obama’s campaign machine have a “foolproof” plan for the President to successfully achieve a third (and perhaps a fourth) term in office.

At one time Obama planned to amend the Constitution:

“President Obama only faces opposition in the House,” a White House insider told WWN. “Barack plans to divide the Republicans in the House and so weaken them that in 2016, the Democrats will once again be the majority. After that he will introduce an amendment to repeal the 22nd amendment, which limits the President’s term in office.”

Chris Matthews of CNBC is already pushing the idea and said on the air that he thinks Obama will successfully pass an amendment doing away with the 22nd Amendment.

“The amendment is ridiculous. There are no Congressional term limits, why should there be a Presidential term limit?”

“Yeah, I know I once said not to tell me that words don’t matter but I have evolved and words meaning something has also got to evolve. It’s time.”

“I have the support of John Roberts, Anthony Kennedy and the liberals on the Supreme Court” said Obama at the press conference. Below, John Roberts is seen bowing to Obama

“I have reviewed the twenty second Amendment and have come to the conclusion that the language is superfluous. We have already found that words such as “established by the state” do not mean what’s written and thus we find that the words ‘No person shall be elected to the office of the President more than twice, and no person who has held the office of President, or acted as President, for more than two years of a term to which some other person was elected President shall be elected to the office of the President more than once’ are similarly superfluous. I find it implausible that these words were meant to restrict someone so focused on fundamentally transforming the country from continuing his mission. Therefore we have ruled that President Obama may seek a third term. We have also decided that other language within the Constitution is superfluous.”

The document currently reads “The words of the Constitution read ‘Congress shall make no law respecting an establishment of religion, or prohibiting the free exercise thereof.’ Nowhere does it suggest that that prohibition extend to the President. Therefore we find that President Obama may take whatever actions he needs to remove the impediment of dissent. Congress has allowed both the President and the Supreme Court to effectively rewrite the law unilaterally and thus as an institution is in tacit agreement with our ruling. We find Congress no longer necessary to the ongoing function of the government.”

“That’s it”, said Obama. “Your orders are waiting for you on the way out. This is the dawning of a new era for the United States of America. I can now finally complete my goals. Have a nice day.”

The picture speaks volumes. I am not an art critic, but having the dog lifting its leg on the Constitution would been even closer to the truth.

I know this is written as irony, but it may be closer to the truth than many expect. Yes, the supreme court could rule that ‘elected twice’ doesn’t mean “only twice”

We see that the uprising over symbolism on government property (confederate flag on state grounds) is only directed toward conservatives. Apparently the symbolism of a gays in the white house by changing the lighting is ‘okay’.

Dr. J: That image was brilliant!

Your tin foil hats are on tight today, tbaggers. Lol!

@another vet: Yeah? Explain that. In detail. Loser.

@JisterJ: Are you trying to insult George?

@JisterJ: Another left wing troll I see who likes calling people names on the internet. Must be a real tough guy no doubt.

@JisterJ: If you do not think the Constitution and the state of the United States is in jeopardy, you are the one that has been living in your shoe box too long. There is already talk about taking down the American flag. – and if so, you will see the crescent moon and star flying high above the WH.

Enchanted if YOU think the Constitution is in such danger why aren’t you doing more than banging your keyboard?
There is already talk about taking down the flag ? Well there is a lot more talk about the imminent return of JESUS
you people here are always hoping that your fortune telling of DOOM will actually come true. You sure sound like you are looking forward to it. You are all the same crowd that predicted that Obama would ruin the economy. Share holder value and profits have NEVER been higher. Capitalists love Obama!!

@another vet: And yet you still can’t give me a tangible example of your bullshit.

@JisterJ: If you are going to troll on by, at least try to use insults that are little more creative than “loser” or “tea-baggers’. We’ve heard them all before so it’s kind of boring. You sound like “this one” who used to troll here. Perhaps you are one and the same.

@another vet: Oh, and the other thing. I don’t consider either of them to be “radical.” Neither their literature nor their history identifies them as such, in my opinion.

Well another vet, at least it seems clear that JisterJ is familiar with teabaggin, I’m sure he/she/it is experienced at it.

You’re fortunate that this is a joke, since the GOP still doesn’t have anyone who could beat him.

@Redteam: I think he is the same one who came here a year or two ago and said I wasn’t a real Vet because I didn’t support Obama. His stupid ass comments and insults are the same. You know how these internet tough guys are.

obama isn’t planning on being president for a third term. He is working on something simpler: Being crowned king, or whatever title he will give himself, just like he created the title, “Office of the President Elect”. It wouldn’t surprise me if he already has his kingly attire all picked out.

When the truth comes out, I hope he will adjust OK to his prison outfit he should have been wearing a long time ago.