The Roberts Court renders all laws meaningless as written 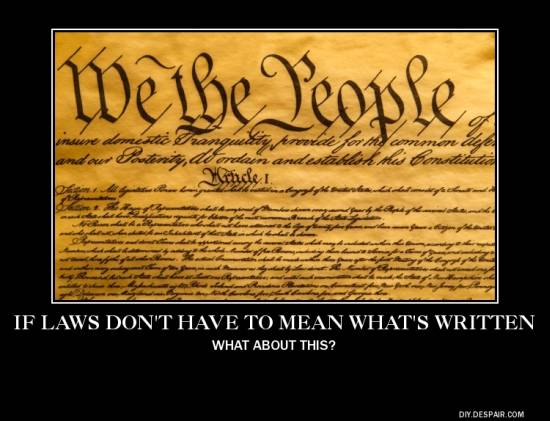 John Roberts is a liar.

Acting as Obama’s champion for the second time, The Supreme Court has upheld Obamacare.

The argument that the phrase “established by the State” would be superfluous if Congress meant to extend tax credits to both State and Federal Exchanges is unpersuasive. This Court’s “preference for avoiding surplusage constructions is not absolute.”

, 540 U. S. 526, 536. And rigorous application of thatcanon does not seem a particularly useful guide to a fair constructionof the Affordable Care Act, which contains more than a few examples of inartful drafting. The Court nevertheless must do its best, “bear-ing in mind the ‘fundamental canon of statutory construction that the words of a statute must be read in their context and with a view to their place in the overall statutory scheme.’ ”

, 573 U. S. ___, ___. Pp. 9–15. (c) Given that the text is ambiguous, the Court must look to the broader structure of the Act to determine whether one of Section 36B’s “permissible meanings produces a substantive effect that is compatible with the rest of the law.”

, 484 U. S. 365, 371. Here, the statutory scheme compels the Court to reject petitioners’ interpretation because it would destabilize the individual insurance market in any State with a Federal Exchange, and likely create the very “death spirals” that Congress designed the Act to avoid. Under petitioners’ reading, the Act would not work in a State with a Federal Exchange. As they see it, one of the Act’s three major reforms—the tax credits—would not apply. And a second major reform—the cov-erage requirement—would not apply in a meaningful way, because so many individuals would be exempt from the requirement without the tax credits. If petitioners are right, therefore, only one of the Act’s three major reforms would apply in States with a Federal Exchange.The combination of no tax credits and an ineffective coverage re-quirement could well push a State’s individual insurance market intoa death spiral. It is implausible that Congress meant the Act to op-erate in this manner. Congress made the guaranteed issue and community rating requirements applicable in every State in the Nation, but those requirements only work when combined with the coverage requirement and tax credits. It thus stands to reason that Congress meant for those provisions to apply in every State as well.Pp. 15–19.

Roberts has interpreted the law to mean something other than what is written in order to save it. At one time he promised not to do that.

“We do not consider whether the Act embodies sound policies. That judgment is entrusted to the Nation’s elected leaders.”

“Members of this Court are vested with the authority to interpret the law; we possess neither the expertise nor the prerogative to make policy judgments. Those decisions are entrusted to our Nation’s elected leaders, who can be thrown out of office if the people disagree with them. It is not our job to protect the people from the consequences of their political choices.”

Yet that is exactly what they did. They protected the political choices. Somehow all the Gruber evidence, which made absolutely clear that the law was written intentionally to be extortionary, meant nothing in the end.

The Roberts Court sets a remarkable precedent- laws no longer have to mean what is written. That pretty much opens the door for any law to be interpreted in any fashion one sees fit. Now Obama is free to interpret anything not as written, but as he desires and he can expect Roberts to have his back.

Boy, was I ever wrong about Roberts.

Now a democrat President can have a law written with one word.

Nothing else is needed. If laws no longer have to mean what’s written and can mean whatever a left wing President wants them to mean, what about this one?

Congress shall make no law respecting an establishment of religion, or prohibiting the free exercise thereof; or abridging the freedom of speech, or of the press; or the right of the people peaceably to assemble, and to petition the government for a redress of grievances.