The Schutzstaffel lives on. It’s known as the Wisconsin Democrat Party 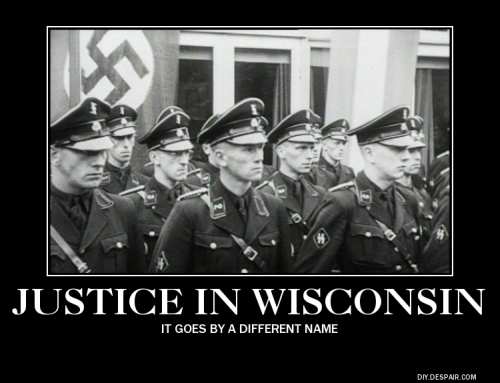 The Schutzstaffel was among other things, the political police of the Third Reich.

The SS expanded from a small paramilitary unit to a powerful force that served as the Führer’s bodyguard, the Nazi Party’s “Protection Squadron” and a force that, fielding almost a million men (both on the front lines and as political police), managed to exert as much political influence in the Third Reich as the Wehrmacht, Germany’s regular armed forces.

Today the SS lives on in Wisconsin. It has been renamed the Democrat Party. They have hated Scott Walker pretty much since the day he was born. The tactics employed by the democrats in Wisconsin are about as un-American as you could imagine. These are awful, awful people. I’ve written about the travails of Scott Walker who has been the target of endless John Doe probes which have been conducted in secret and come up empty. Now it’s time for you to know the execrable treatment being meted out to his colleagues.

National Review today published an article on the home invasion of Cindy Archer:

Cindy Archer, one of the lead architects of Wisconsin’s Act 10 — also called the “Wisconsin Budget Repair Bill,” it limited public-employee benefits and altered collective-bargaining rules for public-employee unions — was jolted awake by yelling, loud pounding at the door, and her dogs’ frantic barking. The entire house — the windows and walls — was shaking. She looked outside to see up to a dozen police officers, yelling to open the door. They were carrying a battering ram.

She wasn’t dressed, but she started to run toward the door, her body in full view of the police. Some yelled at her to grab some clothes, others yelled for her to open the door. “I was so afraid,” she says. “I did not know what to do.” She grabbed some clothes, opened the door, and dressed right in front of the police. The dogs were still frantic. “I begged and begged, ‘Please don’t shoot my dogs, please don’t shoot my dogs, just don’t shoot my dogs.’ I couldn’t get them to stop barking, and I couldn’t get them outside quick enough. I saw a gun and barking dogs. I was scared and knew this was a bad mix.”

And it went downhill from there. Rights? Republicans in Wisconsin have no rights.

As if the home invasion, the appropriation of private property, and the verbal abuse weren’t enough, next came ominous warnings. Don’t call your lawyer. Don’t tell anyone about this raid. Not even your mother, your father, or your closest friends. The entire neighborhood could see the police around their house, but they had to remain silent. This was not the “right to remain silent” as uttered by every cop on every legal drama on television — the right against self-incrimination. They couldn’t mount a public defense if they wanted — or even offer an explanation to family and friends.

The witch hunt was led by the highly partisan democrat Milwaukee District Attorney John Chisholm who decided it was his prerogative to stop Scott Walker by any means necessary.

Read the entire sordid story at NR. That will be a appetizer for the rest of this disgusting travesty. MD Kittle of Watchdog.org has done a remarkable job in following this terrifying abuse of the law. There are 194 parts so far. Don’t miss the story of Kelly Rindfleisch, against whom Chisholm trumped up a case and is going to jail because she wouldn’t lie about Scott Walker.

Rindfleisch, was convicted in 2012 on a nebulous charge of misconduct in public office for answering campaign emails while serving as an aide to Gov. Scott Walker when Walker was Milwaukee County executive.

The charge, like the prosecutors’ sweeping search of Rindfleisch’s computers and smartphones, appears to have been expansive and ill-fitting her “crimes.”

But Milwaukee County District Attorney John Chisholm, a Democrat, and his assistants wanted the Walker aide to play ball and deliver something they could use, possibly to ensnare Walker — the Republican candidate for governor in 2010.

She didn’t, she couldn’t, so they charged her with a felony.

There’s lots and lots more. I have been following this for a long time and today’s article set me off. It also set off Rush Limbaugh (via Glenn):

The innocent in Wisconsin were guilty because they were conservative. The left in Wisconsin was losing everything. They were losing their union domination and control. Scott Walker was decimating all the systems they had put in place.

They literally lashed out in panic, anger, and you name it to punish people who had voted for Walker, who had raised money for him, who they thought had voted for him. It was the kind of thing that Vladimir Putin does and we all laugh about because that’s what we expect in a tyrannical dictatorship like the Soviet Union or Russia. We find out that it can happen here and has happened here, and there was no mechanism to stop it. The prosecutor’s name is Chisholm, John Chisholm, and I hope his name is never forgotten. . . .

The judge, without whom this case could not have happened, is Barbara Kluka, K-l-u-k-a, and I’ll tell you what she did. She came along in the second John Doe investigation, and she approved every petition, every subpoena, every search warrant in the whole case in less than one day’s work. She enabled law enforcement to raid these innocent citizens’ homes. She’s since recused herself from this, but not before she enabled all of this to happen in the second phase of the John Doe 2 case here.

In the second John Doe case, the DA, John Chisholm, had no real evidence of wrongdoing by anybody. It didn’t stop him. Conservative groups were active in issue advocacy, which is protected by the First Amendment. It didn’t violate any campaign finance laws. Issue advocacy is politics 101. These people were targeted because they’re conservatives and liberals. As I say, what happened here in not only the treatment Scott Walker got, but everybody else, this is liberalism run amok without any checks, without any opposition, without anybody pushing back, and in its own way California is the same example.

Despite the fact that there were no violations of the law in any away, the DA, Chisholm, convinced “prosecutors in four other counties to launch their own John Does, with Judge Kluka overseeing all of them. Empowered by a rubber-stamp judge, partisan investigators ran amok. They subpoenaed and obtained (without the conservative targets’ knowledge) massive amounts of electronic data, including virtually all the targets’ personal e-mails and other electronic messages from outside e-mail vendors and communications companies. The investigations exploded into the open with a coordinated series of raids on October 3, 2013. These were home invasions,” including the ones that I have detailed previously in this half hour.

If you didn’t actually read this you’d never believe something this execrable could go on in the United States of America yet it did and it’s all pure, pure democrat malevolence.