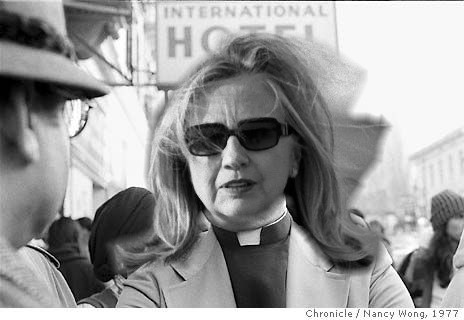 As more damaging information about Hillary Clinton surfaces, liberals aren’t interested. Not only are they disinterested, they seem to harden their position on her, regardless of how bad that information is.

It reminds me of Jim Jones. Ironically, Jim Jones was a cult leader and -ready for it?- a community organizer and Marxist who also believed in “spreading it around.” Among his early friends were George Moscone, Walter Mondale and Rosalynn Carter. Willie Brown and Jerry Brown hailed Jones at a testimonial for Jones in 1977. During the testimonial Willie Brown praised Jones, saying Jones was

“what you should see every day when you look in the mirror in the early morning hours… a combination of Martin King, Angela Davis, Albert Einstein… Chairman Mao.”

“Rev Jim, It may take me many a day to come back down from the high that I reach today. I found something dear today. I found a sense of being that makes up for all the hours and energy placed in a fight. I found what you wanted me to find. I shall be back. For I can never leave.”

Jones was the darling of the left- at times hosting such notables as Angela Davis.

Jim Jones had rabid sycophantic supporters who could not be persuaded by logic. Eerie, no?

Over the last day two articles have caught my attention for different reasons and then I noticed what they had in common.

I linked to one of them in the MW section. At Dvorak.org Marc Perkel, who claims to be an email expert, asserts that Hillary emails could easily have found themselves in the hands of anyone at the spam filtering site she used:

While it was at MxLogic it could be read, tapped, archived, or forwarded to anyone in the world without anyone knowing.

This would be both careless and cavalier and Perkel clearly knows Hillary dodged the rules.

The bottom line – none of this would have happened if she had just played by the rules.

Yet where does that leave Perkel? You know it.

If she’s the candidate I would still vote for her in the general election over any Republican.

Then there’s Dan Metcalfe, who claims to have run the government FOIA. He wrote an article in which he says Hillary’s email defense is “laughable.”

But having spent a quarter-century at the forefront of the government’s administration of the FOIA, including its transition to electronic records and its involvement in so many Clinton administration “scandals du jour,” I know full well that both what Secretary Clinton arranged to do and what she now has said about that are, to put it most charitably, not what either the law or anything close to candor requires. At a minimum, it was a blatant circumvention of the FOIA by someone who unquestionably knows better and an attempted verbal “cover” of the situation (if not “cover-up”) that is truly reminiscent of years past.

OK, so Hillary’s dishonest. We agree. And yet again…

And I say that even as someone who, if she decides to run for president and is the Democratic nominee, will nevertheless vote for her next year.

If you ever wondered why it takes years to get a simple FOIA request fulfilled….

I find much wrong with Hillary. I don’t think she’s ever accomplished a thing on her own. Everything derives from her marriage or her gender but there’s more and it’s worse. She knew the Benghazi attacks had nothing to do with video. Despite that she leaned over the caskets of the returned dead and swore to the parents who lost their children that she’d prosecute the video maker. I cannot tell you how contemptible I find lying to the parents of dead children. It’s beyond bad- I think it’s evil.

Hillary Clinton is not a candidate. She is a cult.

No different than the Obama cult. They both exploit corruption because they both know they will not be held accountable. Hillary may take some lumps in the media, but her sycophants don’t care; they are “ready for Hillary”.

While this story may have been scrubbed from the web, I recall it from when it was happening:
A young woman from Africa (caught in the USA illegally) claimed to be a princess in hiding because her Muslim family would surely have her genitally mutilated if she were sent back to North Africa. She sought asylum directly through Hillary Clinton who took her cause up personally.
Then the truth came out:
She was a maid or servant and in no immediate danger of genital mutilation at all.

Hillary did a 180 and became a good friend of hard-line Muslim societies like UAE, Bahrain and Saudi Arabia. All of these places are tough on their female populations.
But all of them are generous to the Clinton charity.
Yet women ignore the facts and adore Hillary for reasons unknown.
They have already drunk the Kool-Aide.

This is more than disheartening-it is scary. When the people who reveal her crimes say they will STILL vote for her, it may already too late to save the country. At least through the ballot box…

Because of such a compliant media I did not know that,

”Boko Haram, founded in 2002, began its campaign of attacks in earnest in 2009 but wasn’t put on the terror list until November 2013 — on the eve of Nigerian activists coming to Congress to testify about Boko Haram’s crimes and demand the terrorist designation. The State Department’s listing of Boko Haram and its offshoot, Ansaru, was so sudden the morning of the House subcommittee hearing that the submitted testimony of Emmanuel Ogebe, a Nigerian lawyer and human rights activist, still included a plea for the U.S. to finally add the Islamist groups to the list.”

And WHY did Hillary delay so long?
Well, of course there was Obama’s ”narrative” about terrorism being on the downslide and his re-election.

But then there was Hillary’s Clinton Initiative donor (BIG donor!) who has been buying up Nigeria for Lebanese Muslims, Gilbert Chagoury, who didn’t want his part in taking so much land away from blacks in that country blamed for the origins of Boko Haram.
While Boko Haram is composed of black men, they are Muslim men first.
They like noting better than to destroy non-Muslim black families, even taking Christian girls by force.
Recently they even pledged allegiance to ISIS.

Boko Haram killed more than 6,300 civilians in 2014 alone, and its rampages this year have included some 2,000 deaths in the Baga massacre alone. Most of the Chibok schoolgirls kidnapped 11 months ago, sparking the #BringBackOurGirls campaign, have not been found.

America’s elected officials are demanding Hillary’s emails concerning Boko Haram and why it was not designated as an FTO, a Foreign Terrorist Organization for over 4 years.
I doubt this will make much news coverage.
I doubt Hillary will produce much about why she delayed so long, too.

Jim Jones had rabid sycophantic supporters who could not be persuaded by logic. Eerie, no?

You can see this demonstrated by the trolls and lefties who post here. Look at the failure of the left to follow the money that dictates the direction of climate research. Look at the failure of the left to understand that actions have unintended consequences. Obama care was designed to insure 40,000,000 people and to reduce costs. Now only 10,000,000 of those are insured while 100,000,000 do not have affordable insurance anymore. Open the borders and look at the diseases that are affecting our population with increased crime not with standing. Raise minimum wage and watch the jobs disappear. Play patty cake with terrorist organizations and watch them increase their atrocities. Lefties lack the ability to reason. Their minds are clouded by their ideology. We can not rationally discuss critical issues with the left even though we enunciate clearly and speak slowly.

” And if Hillary told them to drink the Kool-Aid, you know they would do it for her. In a second.”
This is one promise that, if I could believe that she would keep it, would convince me to vote for her.
To order her supporters to drink Long Sleep Kool-Aid would do more good for this nation that any cumulative harm that she could do in four years. Of course, they are already in a self-imposed sleep, kinda.
Note: Voting for her in this instance would not make me a supporter.

Most likely it will be the right that will make Hillary Clinton president. They’ll keep the GOP from nominating any candidate that a majority of Americans would be willing to vote for. The match-up polls tell the story. Not the point spread, which is a minimum of 8 points in Clinton’s favor with any match, so much as the fact that there’s not a single centrist republican name on the list. The GOP shows no signs of giving centrist voters such an option.

@Greg:Here is a typical statement from 07

Clinton has led the Democratic pack in every Gallup Poll conducted between November 2006 and October 2007. For most of this time, Clinton has led Obama by a double-digit margin.

The GOP shows no signs of giving centrist voters such an option.

And where is the option given to voters for a centrist Democrat? Or maybe, in your delusional mind, you think Elizabeth (Fauxcahontus) Warren is a centrist?

Not the point spread, which is a minimum of 8 points in Clinton’s favor with any match,

So remind us again why it matters who is leading in any polls at this time.